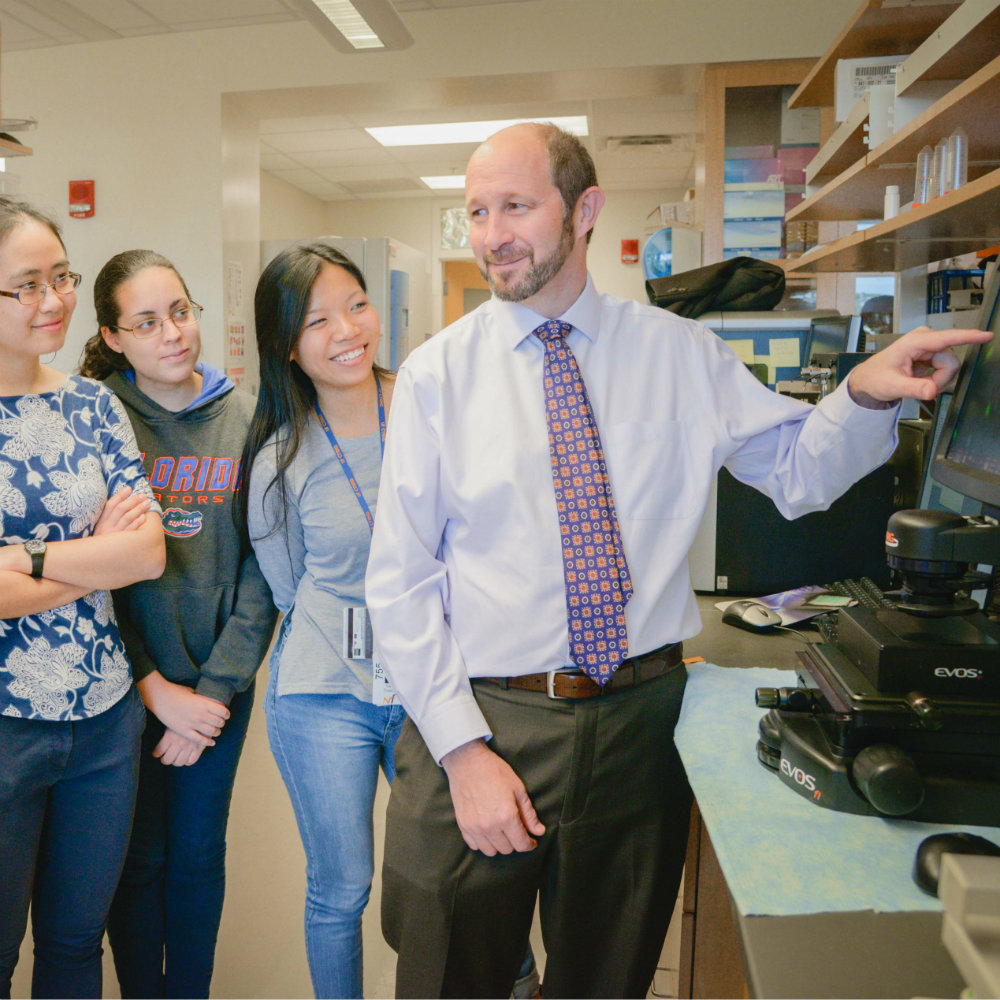 It’s estimated that as many as 600,000 Floridians currently live with Alzheimer’s disease. That’s over 10 percent of all Americans coping with the devastating neurodegenerative disorder, which slowly erodes memory and other cognitive functions and imposes an enormous burden not only on the sufferer but on caregivers, loved ones and society as a whole. As the population grows, the number of Floridians with Alzheimer’s is expected to at least double by 2050.

To address this crisis, University of Florida Health is leading a consortium of institutions that banded together in 2015 to form the 1Florida Alzheimer’s Disease Research Center. This November, to mark Alzheimer’s disease awareness month, Todd Golde, M.D., Ph.D., director of the 1Florida ADRC and the Evelyn F. and William L. McKnight Brain Institute of the University of Florida, shines light on UF’s role in a nationwide initiative to combat the disease and his hopes for the future.

Q. What is the 1Florida Alzheimer’s Disease Research Center?

Dr. Golde: The 1Florida ADRC is a National Institutes of Health-funded center and the only of its kind based in Florida. It’s a University of Florida-led consortium of institutions including Mount Sinai Medical Center, the University of Miami, Florida Atlantic University and Florida International University. We have over 40 faculty members from these institutions working together to conduct research around Alzheimer’s disease.

Q. What treatment options are available for Alzheimer’s disease?

Dr. Golde: Current options include several classes of drugs that are designed to enhance memory. These drugs have very minimal impact in most people. They do not modify the disease course, so the disease will continue to progress. In some people, these drugs seem to temporarily improve their cognitive function and memory, but in most cases, that effect is not noticeable by the spouse or caregiver. So we have a huge unmet medical need.

Q. How will the 1Florida Alzheimer’s Disease Research Center advance our knowledge of the disease?

Dr. Golde: A central component of the 1Florida ADRC revolves around our clinical core. We will follow a cohort of individuals, ranging from those considered normal to those with varying degrees of cognitive impairment. Over many years’ time, we will study their trajectories and phenotype them, recording various fluid and imaging biomarkers to try to understand who has Alzheimer’s disease, what are the predictors and which aspects influence rates of progression.

Q. The 1Florida Alzheimer’s Disease Research Center is following participants of different racial and ethnic backgrounds. Why is this significant?

Dr. Golde: The vast majority of published data on Alzheimer’s disease has been on people of Caucasian European descent. This is significant when we draw conclusions about Alzheimer’s disease with respect to incidence, progression and risk factors. A major focus of the 1Florida ADRC that distinguishes us from counterparts in other parts of the country is that our cohort is about 60 percent Hispanic. There are studies that suggest the incidence of dementia may be higher among people of Hispanic origin, but we don’t know yet if that’s true or not.

Q. How many participants are currently enrolled in the 1Florida Alzheimer’s Disease Research Center?

Dr. Golde: We’ve enrolled about 400 participants so far. We hope to expand the clinical core activity with an increasing focus on recruitment of African Americans. At UF Health, we’ll partner with our movement disorders center to focus on what we call “atypical dementias,” or non-Alzheimer’s dementias. That will create a bigger reach throughout the state.

Q. What is the ultimate goal?

Dr. Golde: Our ultimate goal is to help contribute to research that will change the lexicon around Alzheimer’s disease from being untreatable, incurable and inevitable to treatable, curable and preventable. We are now two-and-a-half decades into trying to crack this nut of developing therapies, and we’ve seen a lot of failures. We know this is going to be hard. It’s going to take a team effort, but we hope within the next 10 years or less we can begin to shift the dialogue.