UF rises to No. 8 in U.S. News list of best public universities 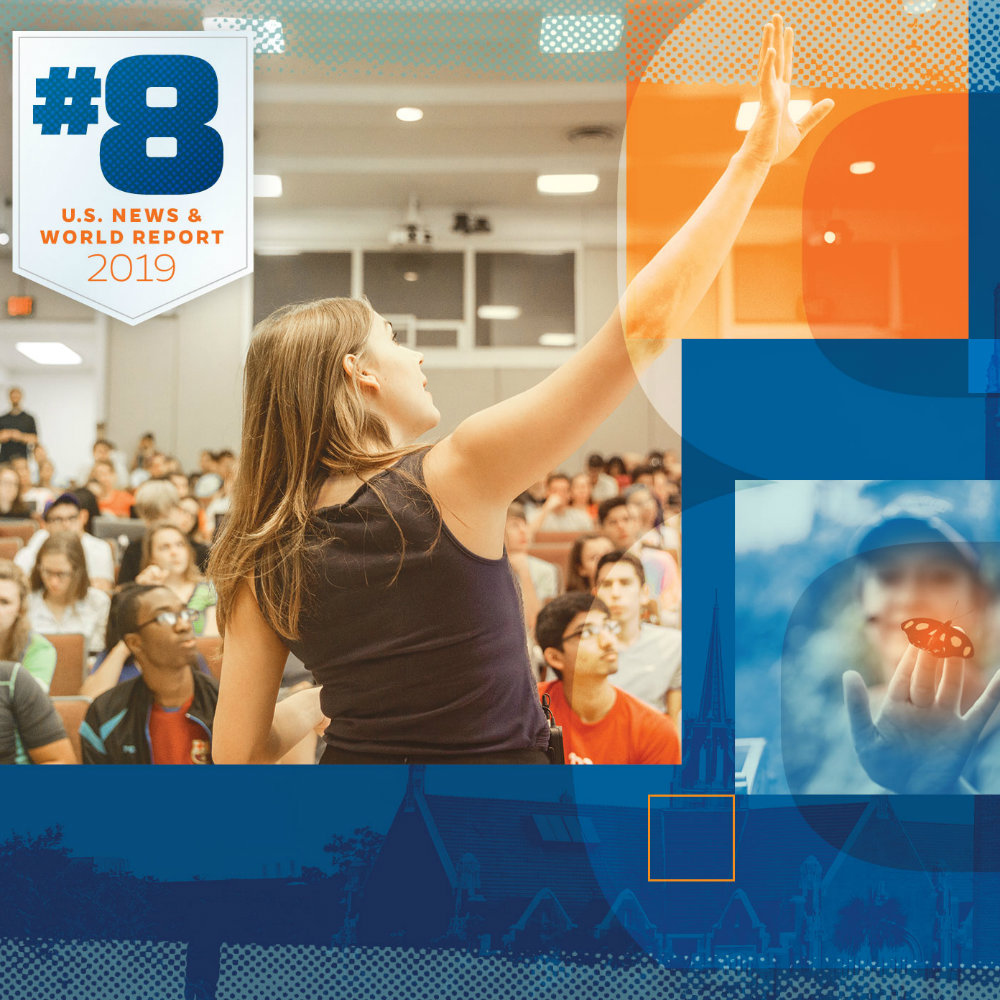 The University of Florida has strengthened its ranking among the nation’s top-10 public universities, rising to the No. 8 spot in the latest U.S. News & World Report Best Colleges list released today.

“Once again, we have much to be grateful for,” UF President Kent Fuchs said. “Our faculty and staff have moved mountains to make this happen, and to them I extend my most heartfelt thanks. The Legislature, Gov. Rick Scott, our Florida congressional delegation, and the Board of Governors have provided unparalleled support, and our Board of Trustees continues to provide outstanding leadership. As our momentum continues to build, we must remain focused on our goal of reaching top-five stature and, above all, ensuring that our students receive the very best educational experience possible.”

The U.S. News rankings are based on up to 15 key measures of quality that are used to capture the various dimensions of academic quality at each university. The measures fall into seven broad areas: undergraduate academic reputation; graduation and retention rates; faculty resources; student selectivity; financial resources; alumni giving; and graduation rate performance.

This year, U.S. News made the most significant change to the formula in more than 20 years, placing increased emphasis on graduation rates. UF is now ranked seventh in the nation on graduation and retention.

The weight of graduation rates in the ranking formula increased from 30 percent to 35 percent, and a new element was added to graduation rates called Social Mobility that measures the proportion of Pell grant recipients in the entering cohort and each school’s success in helping those students complete their degrees.

In addition, UF’s student-faculty ratio improved from 20:1 to 19:1, and annual alumni giving increased from 11.2 percent to 14.3 percent.

UF’s quest to become a top-10 public research institution officially began in 2013, when the Legislature passed, and Scott signed, a bill designating it a preeminent university and providing special funding to be used for helping it reach top status. Florida State University also received the preeminent designation, and the University of South Florida was designated as preeminent earlier this year.

UF has since used preeminence funding to hire more than 100 senior leading faculty from all over the world.

Last year, the university also announced a plan to increase the faculty by an additional 500 members over and above normal faculty hires to continue to increase research excellence and reduce class sizes. More than 200 of those faculty have been hired.

The university’s research awards also have reached new heights. Research funding hit a record $837.6 million in fiscal year 2018, surpassing the previous record set in fiscal 2016 by more than $113 million, or 16 percent. This significant rise was largely due to a 23 percent increase in funding from the federal government for biomedical, agriculture and defense-related research that contributes to the health, safety and economic well-being of all Floridians.

In August, the university announced that alumni and friends invested $414 million in UF during the fiscal year that ended on June 30, marking the third consecutive time private giving has surpassed $400 million. That puts the university more than halfway toward reaching its $3 billion fundraising goal for its Go Greater campaign.

“The newest rankings are confirmation that we are making good choices and investing in the right places,” Fuchs said. “For Florida, having a top-ranked university means more and better jobs, economic growth and national stature that is befitting of the country’s third-most-populous state. Clearly, we are moving in the right direction.”