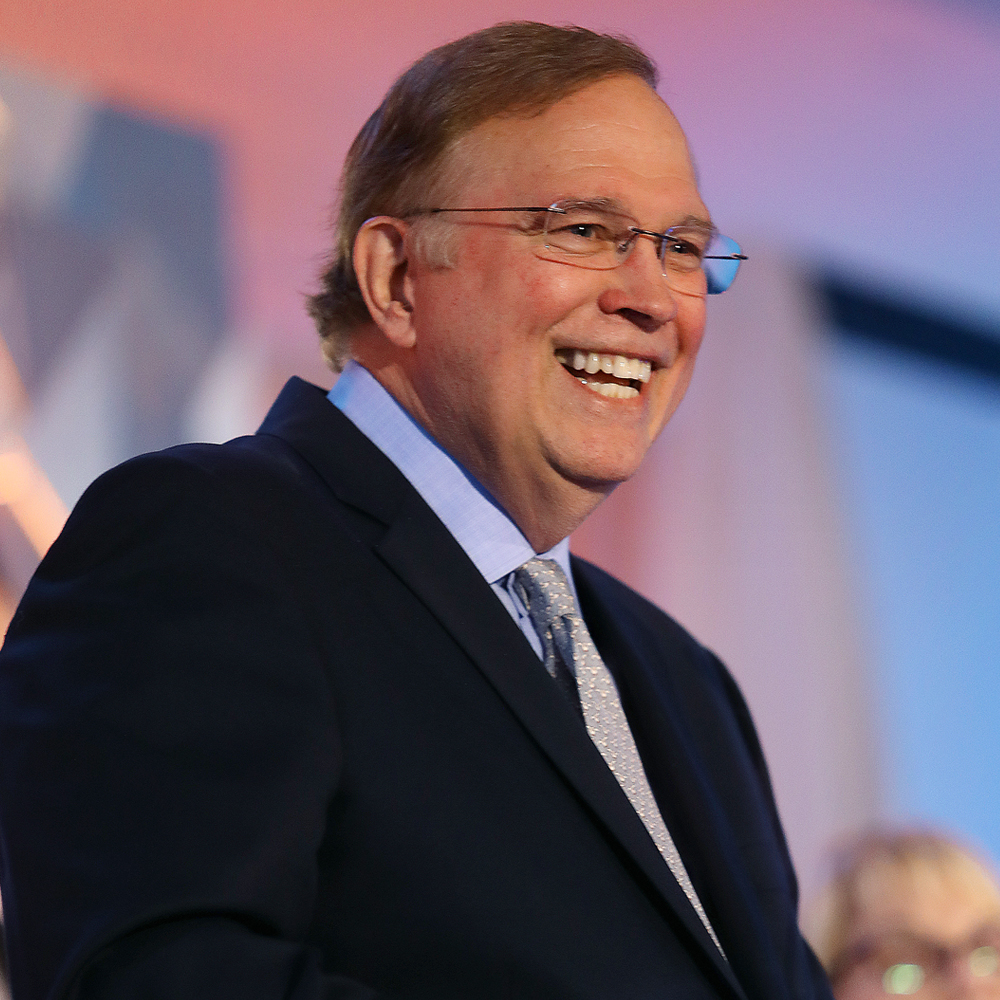 Two teenage brothers, a Japanese businessman, an entrepreneur who revolutionized pest control, the CEO of a pioneering entertainment- and media-focused university, and a couple regarded as a cornerstone of their community were recognized for their leadership, service and philanthropy by the University of Florida on March 1.

“As the University of Florida explores opportunities to go greater for all the people we serve — whether through discovery, knowledge, sharing or outreach — we’re thrilled to recognize the individuals who are leading us by example,” said UF President Kent Fuchs. “Just as the world is looking to UF for 21st century solutions, the university is looking to Gators like these honorees for guidance and inspiration.”

Bill Heavener’s contributions to UF — both through service and philanthropy — are immense. Heavener, CEO of Full Sail University in Winter Park, is a UF trustee and board member for numerous UF entities, among them: the Foundation, Alumni Association, University of Florida Investment Corp. and Warrington Business Advisory Council. He is past-president and legacy director for Gator Boosters. Heavener’s philanthropy is equally generous. His gifts to UF support undergraduates in the Heavener School of Business via the building that carries his name, Heavener Hall, and student-athletes through the Heavener Football Complex at Ben Hill Griffin Stadium. He earned his UF bachelor’s in business administration in 1970 and was named a distinguished alumnus in 2011. 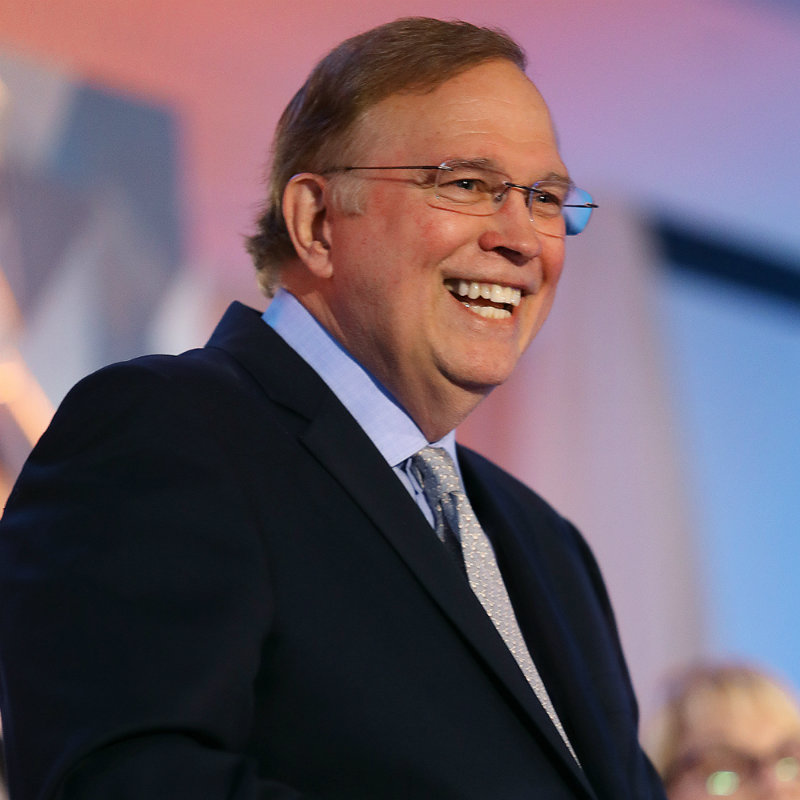 Charles and Margie Steinmetz are longtime university advocates. Among their volunteer leadership roles, Charles Steinmetz is on the UF Foundation National Board and served on the College of Agricultural and Life Sciences’ campaign steering committee. The Steinmetzes’ 2010 gift created endowments to boost UF’s Institute of Food and Agricultural Sciences’ Department of Entomology and Nematology; in recognition, campus’ Steinmetz Hall is named in their honor. Margie Steinmetz is also an avid supporter of UF’s Arts in Medicine program. Charles Steinmetz, a leader in the pest control industry for more than 40 years, earned his UF bachelor’s degree from the College of Agricultural and Life Sciences in 1961. He is a 1999 Distinguished Alumnus Award winner. Margie Steinmetz is an author, facilitator and national speaker on caregiving, life transitions and human potential. 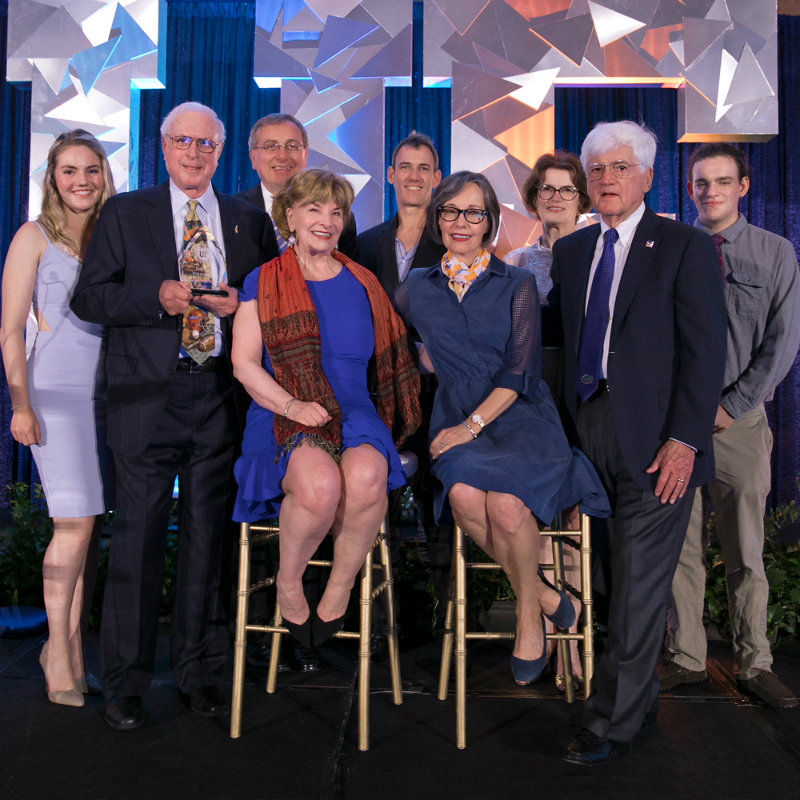 Over the years, Gary and Nancy Condron have supported Athletics, the Whitney Laboratory for Marine Bioscience, Machen Florida Opportunity Scholars and the College of Design, Construction and Planning. One of their latest leadership gifts supports the Whitney Lab’s sea turtle hospital in St. Augustine; Nancy Condron is a founding volunteer for UF’s sea turtle project and coordinates sea turtle patrols on beaches in northeast Florida. Gary Condron, who serves on the College of Design, Construction and Planning Dean’s Advancement Task Force and other UF boards, earned a UF bachelor’s degree in building construction in 1976. Nancy Condron earned two UF degrees: a master’s in business administration and a Juris Doctorate, both in 1986. 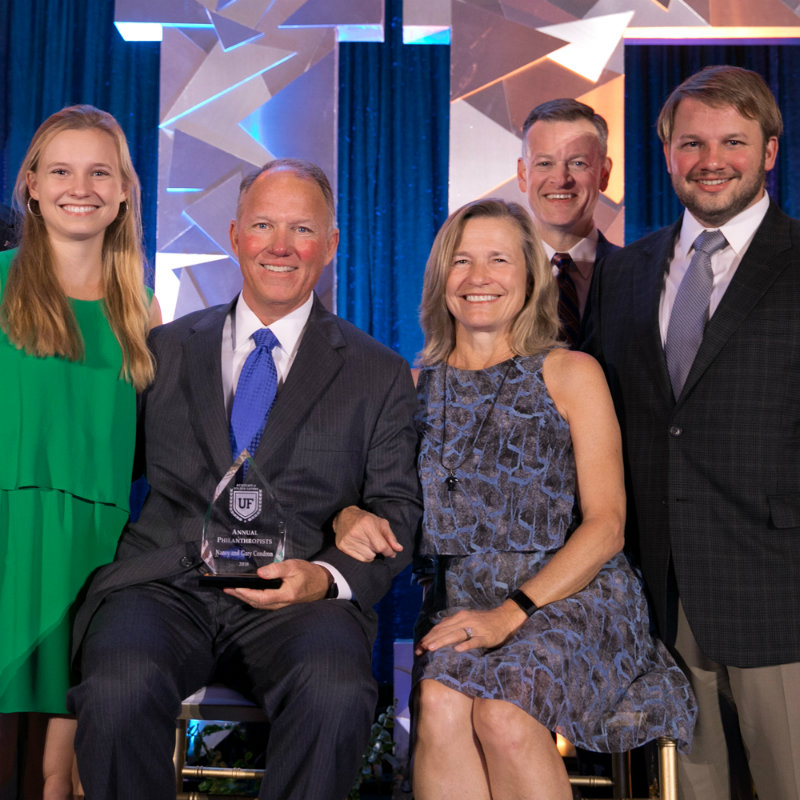 Sachio Semmoto’s gift to the university supports the Herbert Wertheim College of Engineering. One of Japan’s most highly regarded businessmen, Semmoto started from scratch the first competitive telecommunications company in Japan, DDI Corporation (now KDDI). He followed with the creation of the highly successful telecommunications ventures eAccess, Inc., and, several years later, EMOBILE, Inc. At UF, he created a professorship in electrical and computer engineering and is the named benefactor of the global teleconferencing facility in the Herbert Wertheim Lab for Engineering Excellence. Semmoto earned a UF master’s degree in 1968 and a Ph.D. in 1971, both in electrical and computer engineering, and he frequently attributes his entrepreneurial success to his graduate education at UF. In 2004, he was recognized as a UF distinguished alumnus by the College of Engineering, and the Warrington College of Business named him the Distinguished Alumnus Entrepreneur of the Year in 2008. 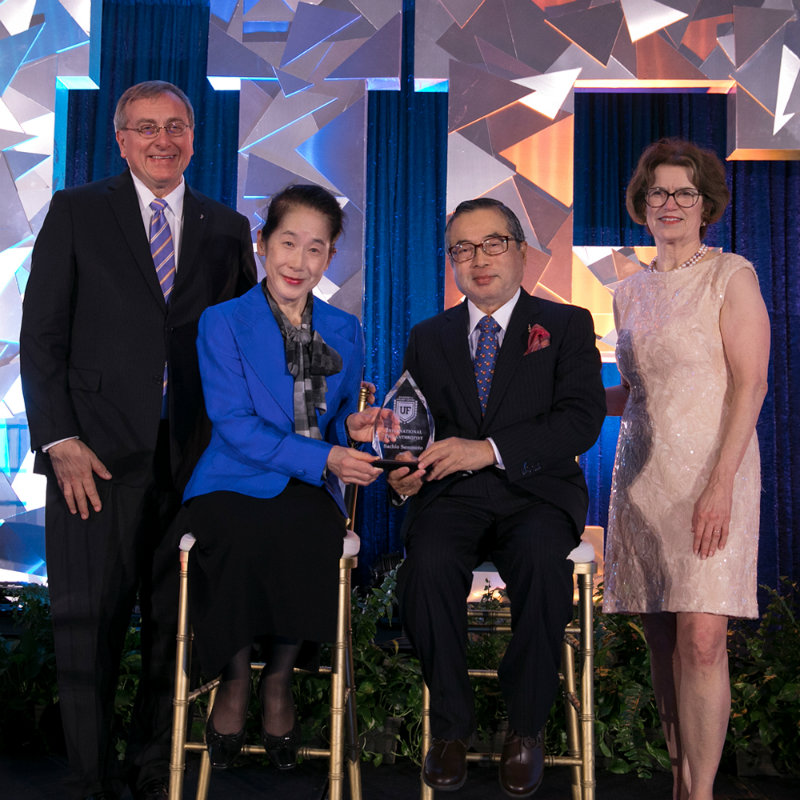 Josh and Bryce Benbasat began the charity PAWSitively Curing Cancer four years ago when the brothers were 15 and 12. Proceeds from specially designed dog collars and other fundraising activities are donated to UF’s College of Veterinary Medicine for pet cancer research and to support lab work investigating cancer vaccines. PAWSitively Curing Cancer was inspired by their own family experiences. The brothers’ first dog, a Lhasa Apso named Sashi, died of cancer, and their grandmother survived breast and lung cancer. Josh Benbasat, now 18, is a freshman studying business administration at the University of Florida. Parents Steve and Dena Benbasat are also UF alumni. Steve Benbasat earned a bachelor’s in finance in 1991, and Dena Benbasat a bachelor’s in education in 1992. 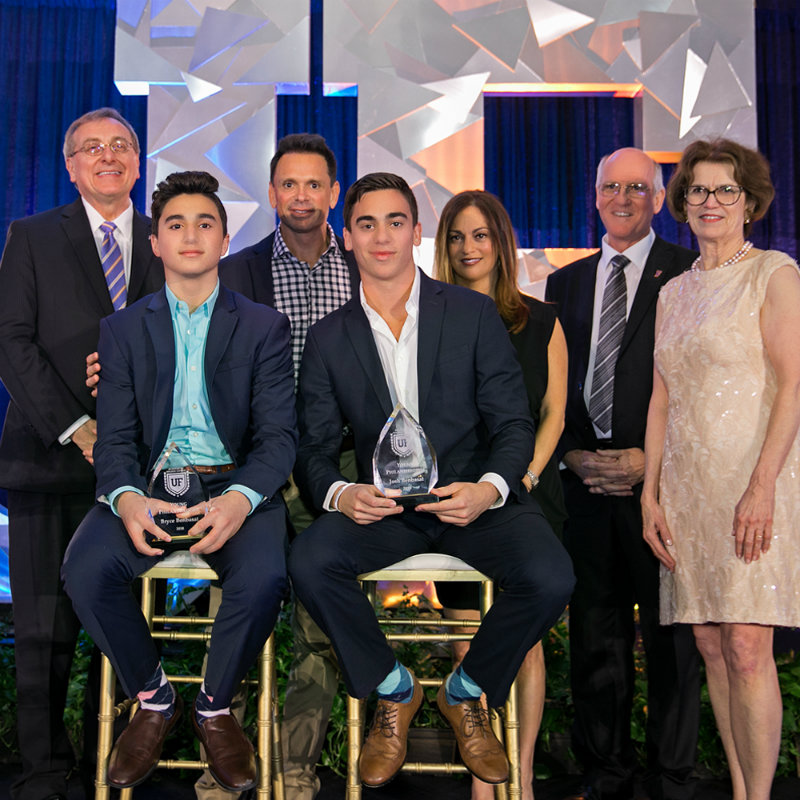 “The people celebrated at the Academy of Golden Gators are absolutely gold-standard Gators,” said Beth McCague, past-chair of the University of Florida Foundation Executive Board. “Their vision, passion and pursuit of excellence are a credit to UF and an inspiration to us all.”

The Academy of Golden Gators reflects UF’s aspiration to be one of the nation’s preeminent public research universities by recognizing philanthropists whose commitment enables UF to solve challenges and improve lives throughout the world. The academy honors the generosity and vision of donors and volunteers who embody the spirit of the university.

The University of Florida has a long history of established programs in international education, research and service, and is one of only 17 public, land-grant universities in the prestigious Association of American Universities. It is ranked No. 9 in the most recent U.S. News and World Report’s list of public universities.