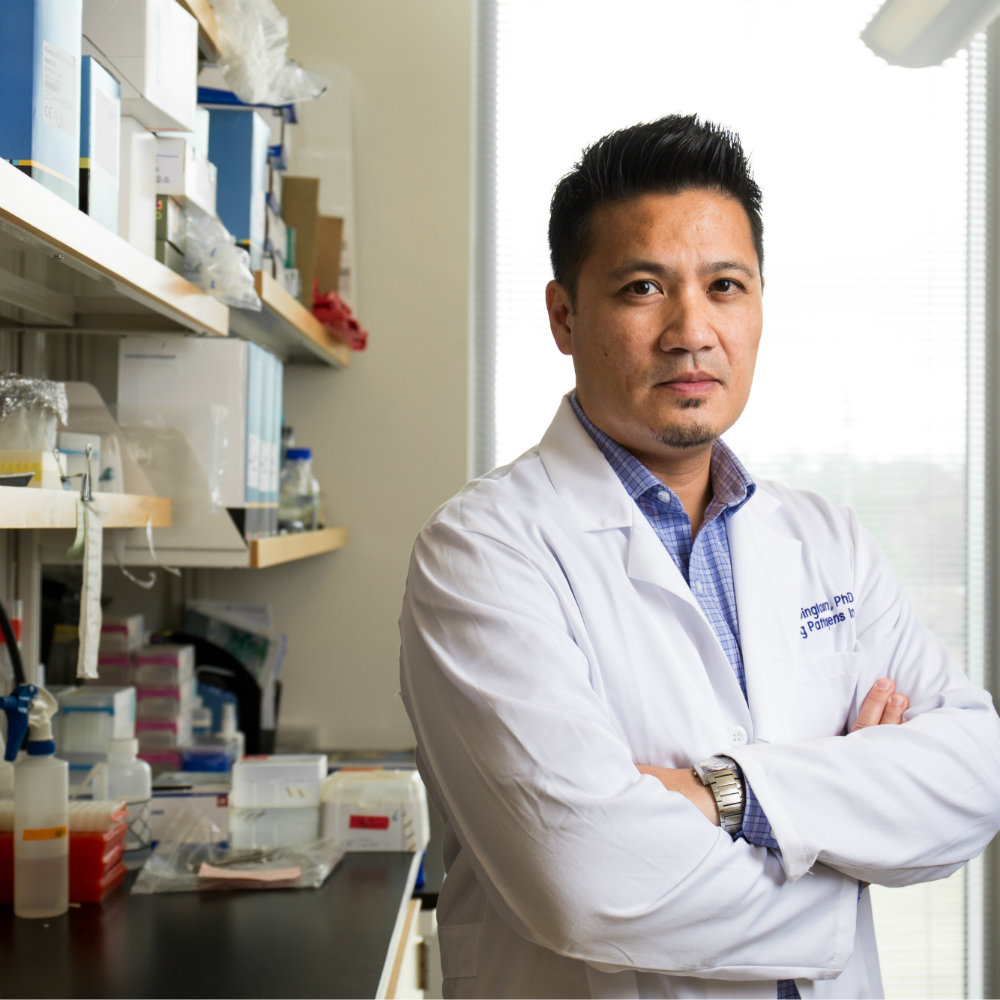 The Global Health Innovative Technology Fund has awarded the University of Florida and partners in the United States and Japan $3.2 million to advance a promising vaccine to prevent transmission of malaria.

Rhoel Dinglasan – an associate professor of infectious diseases in UF’s College of Veterinary Medicine and the university’s Emerging Pathogens Institute – has spent years developing a malaria transmission blocking vaccine, or TBV. The blood mosquitoes get from immunized humans would prevent the insects from becoming infected by the Plasmodium parasite that causes malaria, thus breaking the cycle of disease transmission.

After Dinglasan and his colleagues identified a protein in the mosquito gut that Plasmodium needs to infect the Anopheles mosquito, called alanyl aminopeptidase N, or AnAPN1, they saw a path to preventing transmission of the disease by creating a vaccine to generate antibodies to AnAPN1 in humans.

Initial vaccine testing in mice stalled because the animals primarily generated antibodies to a less-crucial fragment of AnAPN1, so Dinglasan and his team refocused their efforts on solving the structure of the protein, which allowed them to more precisely map the relevant transmission-blocking regions of the protein to target. When they tested the antibodies to the redesigned vaccine target using infected blood samples from children in Cameroon, a country hard hit by malaria, they found that minute amounts of the antibody completely prevented transmission of the parasite to the mosquito.

The new grant from the Global Health Innovative Technology, or GHIT, Fund will further development of processes to move the vaccine from the experimental stage to human trials and, ultimately, a clinical treatment. The GHIT Fund is an international public-private partnership spearheaded by the Government of Japan, the Bill and Melinda Gates Foundation, Wellcome Trust and a group of pharmaceutical companies.

“AnAPN1 is a great pan-malaria transmission-blocking vaccine and we have made it even better,” said Dinglasan, who was recruited to Gainesville under the UF Preeminence initiative. "This funding support puts the vaccine back in the process development and vaccine production pipeline with an eye on getting to first-in-human trials in a few more years."

Historically, malaria prevention has focused on killing the mosquitoes that transmit the disease using pesticides like DDT or shielding humans from mosquitoes with nets, but these approaches alone are not enough to prevent nearly a half-million people around the world from dying from malaria annually, many of them children under 5.

The next phase of the project involves numerous partners contributing unique capabilities.

CellFree Sciences of Japan is developing the important control antigens and Hamamatsu Pharma Research of Japan will assess the long-term potency of the vaccine in non-human primates.

The Infectious Disease Research Institute, or IDRI, of Seattle, has been a long-time longtime partner on this project and continues to assist by providing the adjuvant to boost the immune response to the antigen.

Ology Bioservices, a UF spinoff in Alachua, will develop the large-scale, process development and manufacturing plan and supply the AnAPN1 vaccine candidate for use in ongoing pre-clinical studies and to prepare for subsequent clinical testing.

Centre Pasteur du Cameroun will test the efficacy of antibodies generated in response to AnAPN1 in mice and non-human primates against naturally circulating strains of the malaria parasite, Plasmodium falciparum, in direct membrane feeding assays in Cameroon.

Dinglasan said the TBV would work in concert with a traditional vaccine being developed by GlaxoSmithKline called Mosquirix™, which is scheduled for pilot implementation in three African countries this year.

“Our vaccine should work against all five Plasmodium parasite species that affect human health,” he said. “Mosquirix™ does not achieve full protection and many people, mostly kids, will still be infectious to the mosquito. Our vaccine puts a stop to that.”

Ultimately, Dinglasan hopes the TBV will be the final nail in the malaria coffin, eliminating pockets of residual malaria transmission that prevention efforts and traditional vaccines cannot reach.

“This vaccine can help stamp out malaria globally,” he said.

Ology Bioservices, Inc. (formerly Nanotherapeutics, Inc.) is a biologics-focused contract development and manufacturing organization (CDMO) serving both government and commercial clients. The company’s capabilities include a pilot facility for performing optimization of upstream, downstream and formulation functions, bulk cGMP manufacturing including biosafety level-3 (BSL-3), and analytical development for proteins, antibodies, viral vaccines and gene therapy drug products. The company provides expertise from preclinical through FDA licensure in a variety of production platforms, including microbial and mammalian cell culture and its proprietary serum protein-free Vero cell platform, a highly versatile platform that has been developed and utilized to deliver a wide range of candidate and licensed vaccines against emerging viral diseases. Ology Bioservices is headquartered in Alachua, Florida.

As a nonprofit global health organization, IDRI (Infectious Disease Research Institute) takes a comprehensive approach to combat infectious diseases, combining the high-quality science of a research organization with the product development capabilities of a biotech company to create new diagnostics, drugs and vaccines. Founded in 1993, IDRI has 125 employees headquartered in Seattle with nearly 100 partners/collaborators around the world.

The Centre Pasteur du Cameroun (CPC) founded in 1959, is a state-owned public health and biomedical research institute located in Yaoundé, the capital city of Cameroon. CPC is a WHO regional reference center for several infectious diseases, and member of the Institut Pasteur International Network with headquarters in Paris, France. The main activities of the CPC include service, public health, training and research.  Research is centered on bacterial, viral and parasitic agents, and their respective major pathologies such as HIV/AIDS, tuberculosis, viral hepatitis, malaria, dengue and other vector-borne diseases as well as neglected tropical diseases.