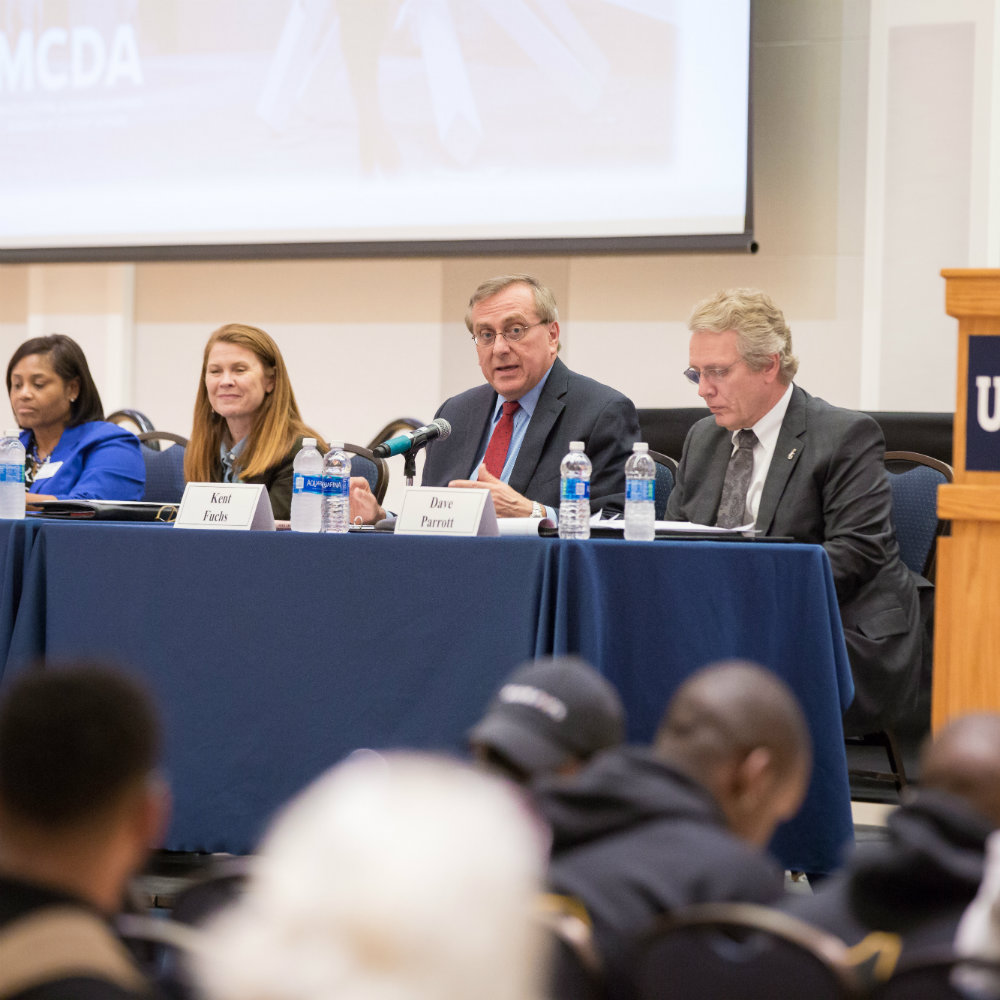 Students of diverse populations want the University of Florida to continue an open dialogue with them to address change at UF.

“I know everyone’s questions were kind of targeting administration to do better, but they are working on it. They are really considering how we feel,” said Ernest Godinez, third year African-American Studies student. “That’s great to hear that, and feel that,” said Godinez following the University of Florida’s Black Student Affairs Task Force and Black Affairs’ town hall meeting at the Reitz Union Rion Ballroom Tuesday night.

More than 70 attended the town hall, organized to give students an opportunity to share their concerns and solutions to improve campus climate with President Kent Fuchs and other administrators. The event also served to provide an update on items discussed in the first town hall, held in March. Returning as moderator was Florida Bridgewater-Alford from University Relations.

“The [administration’s] responses were definitely better,” said Ayinde Leconte, a business major who attended the event held during the spring semester. 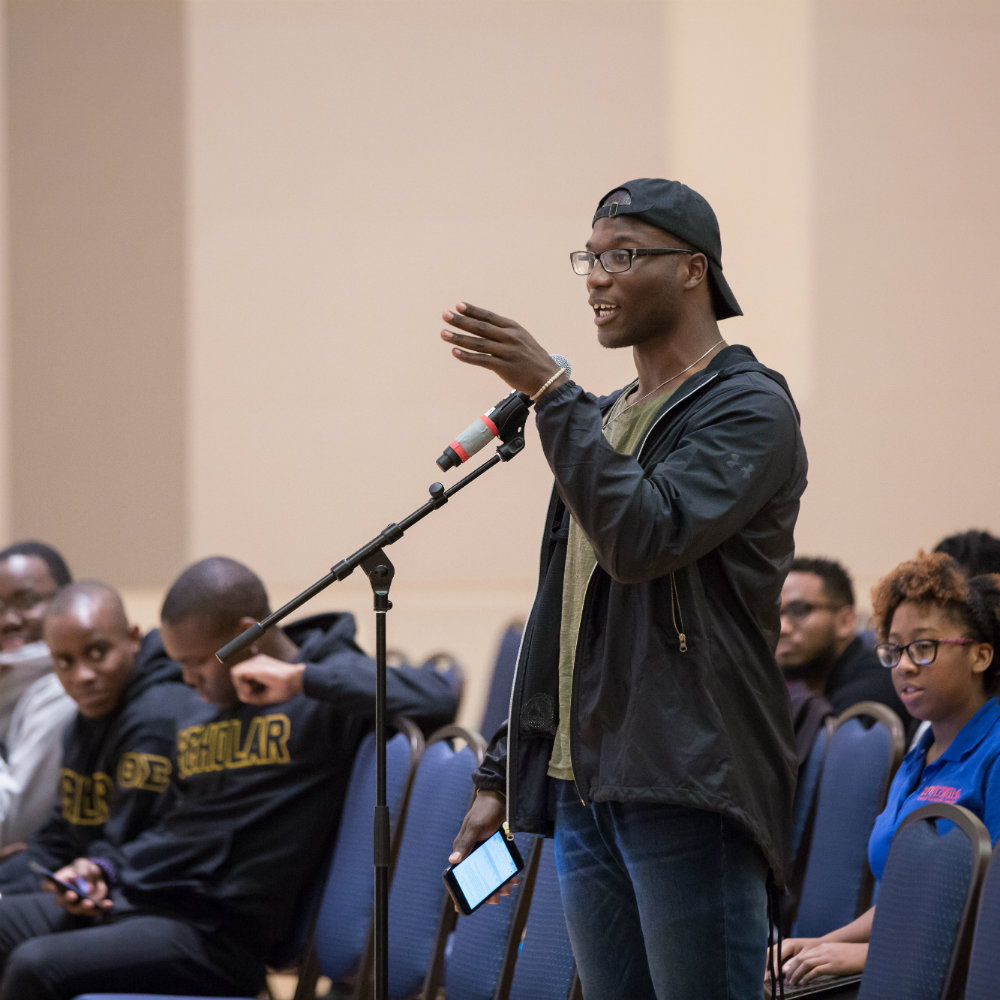 Students then lined up to ask questions and engage in a dialogue with the administrators. The first question of the night focused on UF’s actions after white nationalist group, the National Policy Institute, despite not being invited by anyone at UF, rented out a space on campus in October.
At that event, UF Public Safety reported “minimal acts of violence and only two arrests,” but students say UF shouldn’t rest on that outcome for potential future speakers like Richard Spencer.

“After Spencer, is there any form of protocol that will be set in place if something like this happens again?” Godinez asked the panel.

“We are not going to do, I don’t believe, what some universities have done, and that’s ban anyone from renting space unless they are sponsored by the university,” Fuchs replied. “There might be ways to not make it so easy to come in and utilize our facilities by uninvited people.” The President added that as a public university, he feels strongly that community groups be able to rent out space, such as high school graduations at UF facilities, he added.

Students questioned how current and future students for UF would feel comfortable at UF after events like this.

“What I want to hear is things like the black task force and other sort of similar groups talk about is how we are going to start protecting black students on campus,” asked Daniel Clayton, 5th year electrical engineering major, after the panel spoke. “How are we going to start rebuilding black engagement, outside of those enrolled here?”

Mitchell said that students can serve as ambassadors in their communities and share their experiences about the University of Florida.
One of the university’s first steps to building engagement is hiring a Chief Diversity Officer to the president’s cabinet. The task force announced it as one of nine updates since the first town hall meeting. This person would report directly to the president as an advisor on diversity and inclusion to all departments in the university.

Gentry says UF is looking for someone “who has demonstrated expertise and experience in the area of diversity and inclusive excellence, hopefully already [working] in higher ed.” She said that the role will serve as a senior adviser to the president and would be a “leader of leaders,” adding expertise to existing practices and programs. “We’re not looking for someone to create an area with highly centralized programming, the research does not suggest that is necessarily successful, and we don’t believe that is a good fit for the university. But someone who can help us learn from one another… and serve as a conduit.”

The Office of Admissions reported on its continuing initiatives to recruit more diverse students.

The office is entering its second year utilizing the Coalition for Access, Affordability, and Success consortium application, which Mitchell says “supports students who are lower resourced and underrepresented to help them through the college application process.”

One of the office’s programs, Gator Access, connected admissions personnel with 51 high schools, reaching about 900 students considering college enrollment, Mitchell reported. “Looking at the application numbers from our African- American community, we did receive 500 more in applications,” she said. “You’ll see that over the course of next year.”

The panel also addressed strategies to recruit black faculty and staff at the university. “We put in place our strategic talent group to help with sourcing… so that we can really make sure our applicant pools are diverse as they can be,” said Gentry, of UF Human Resources. “What you want to begin with is a very representative faculty pool.”

A student asked about the problem with retaining faculty and staff at UF, and Gentry said the administration as a whole has acknowledged that there is work to be done to address the climate and culture.

Fuchs says he plans to continue to have these town halls, and perhaps vary the panel members in order to include more voices in the conversation.
“I am looking forward to the spring semester and everything we are trying to implement,” said student Leconte.

To watch an archived webcast from the event, click here.