The dynamics of disease and poverty 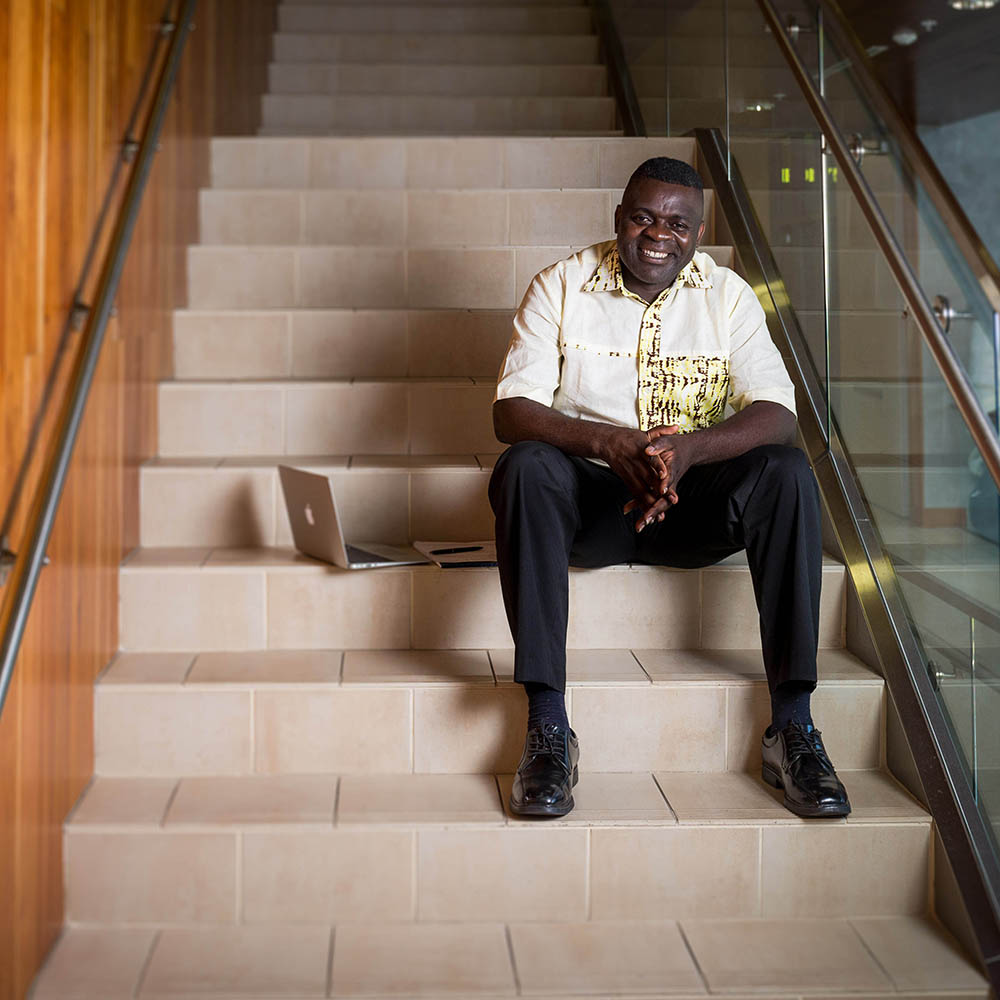 Growing up in rural Cameroon, Africa, Calistus Ngonghala watched helplessly as malaria and HIV-stricken neighbors traveled on foot for hours or days to reach clinics with antibiotics and antiretrovirals. Others made the journey by piling six to eight into compact cars designed for four.

These haunting memories fuel the mathematician's ambitions. In a field known for working equations, Ngonghala puts equations to work for the world's sick and poor.

The University of Florida assistant professor of mathematical biology uses math to understand the complex biological and socio-economic processes that characterize vicious cycles of poverty and disease in developing countries, and make predictions and policy recommendations for ending the cycles. Ngonghala argues that math should work to solve real world problems, and that governments can utilize mathematical models to help the world’s most impoverished people climb out of poverty traps.

“Mathematics is not just the equations done in elementary and high schools around the world,” Ngonghala said. “There’s this idea that math is just solving equations and it’s not all that useful in everyday life. Actually, math is a special language, a fundamental tool, for critical thinking in almost every walk of life. My ambition is to put equations into practical use. And I’m trying to do it in a way that relates directly to me, to my home country, and to the problems I experienced growing up.”

As a visiting professor in the masters of public health program at the French School of Public Health in Paris, a postdoctoral associate at the National Institute for Mathematical and Biological Synthesis, a research fellow at Harvard Medical School, and now an assistant professor in UF’s mathematics department and an affiliate of UF’s Emerging Pathogens Institute, for years, Ngonghala has developed models to investigate the connections between poverty and disease in the world's most impoverished places.

In Cameroon, Ngonghala noticed a cycle of poverty, disease and pests, which kept his friends and family members from reaching their fullest potential. When people were too sick to work, they became too poor to afford health care. If they were too poor to afford health care, they certainly were not able to afford pest control to rid their homes of insects like malaria-carrying mosquitoes.

Of course, things are only made worse when local clinics cannot adequately treat common diseases, are understaffed, and when people have to walk long distances to reach a doctor.

“Infectious disease is just one of the drivers of poverty. There are other things, too, like loss of renewable resources, population growth, land use changes, agricultural pests, and the list goes on,” Ngonghala said, pointing out that people in extremely poor parts of the world rely mostly on their immediate surrounding for subsistence. “So I’m developing mathematical models that explain reinforcing feedbacks between poverty and these drivers, and using the models to inform policy on ways to disintegrate such feedbacks.”

He recently led a team of scientists that developed a combination of economic, ecological and epidemiological models used to understand how relationships between biological and economic systems can lead to poverty traps. The team’s findings appear this month in Nature Ecology and Evolution.

For the study, Ngonghala used economic and disease data from 83 countries, ranging from the poorest to the wealthiest nations. His team looked at factors like annual income, disease and death rates, and financial losses resulting from disease. They found high rates of disease and instances of unaffordable, or unavailable, health care were significantly higher in extremely poor countries.

Ngonghala’s models show what he calls “two different worlds.” In the first world, poor people live in a place with low rate of disease among people, crops and animals, and are often able to escape poverty with economic aid. But in the second world, places like Madagascar, where the average income is less than $2 a day and disease is widespread, poverty traps are common and the poor are unable to dig themselves out.

In these cases, the numbers are against the poor and sick. Ngonghala’s team found that unsustained economic aid and health care might not be enough for the poor to permanently break free of these poverty traps.

But Ngonghala’s models show that there’s a way to turn these numbers around. His analysis found that with sustained efforts to address the root causes of severe poverty, poverty traps can dissolve. His models also show that affordable, robust health care is a key determinant of sustainable economic growth for the poor.

Ngonghala created the models with an end result in mind of influencing policy in the developing world. He hopes the models will eventually encourage developing countries to adopt similar action as Rwanda did in 2015, when the Sub-Saharan country achieved all of its Millennium Development Goals, a series of international development goals. Rwanda did this through universal health coverage with social insurance systems and providing broad access to health care for the poor. Since then, economic growth in Rwanda has been among the highest in Africa.

Ngonghala’s models still need to be tested using more detailed data from surveys done on the ground in developing countries. So, he is partnering with Pivot, a nonprofit that provides health care in Madagascar, to collect data, test the models and validate their efficiency. Once data is collected and the models validated, Ngonghala will be able to make predictions and recommendations, which governments and nonprofits can use to combat poverty traps.

“The problems in Madagascar are in many ways like the problems in Cameroon and other developing countries,” Ngonghala said. “When we finish testing in Madagascar, then from there we’ll go to other of the most impoverished countries and continue implementing the models.”

By the end of his career, Ngonghala hopes to have contributed substantially to ending poverty and disease in some of the most impoverished areas of the world — including at home, in Cameroon.

“There were just so many times when it could’ve been different,” Ngonghala said, recalling the past. “And it all goes back to poverty and disease.”