A serious and often overlooked issue for patients with brain diseases: swallowing 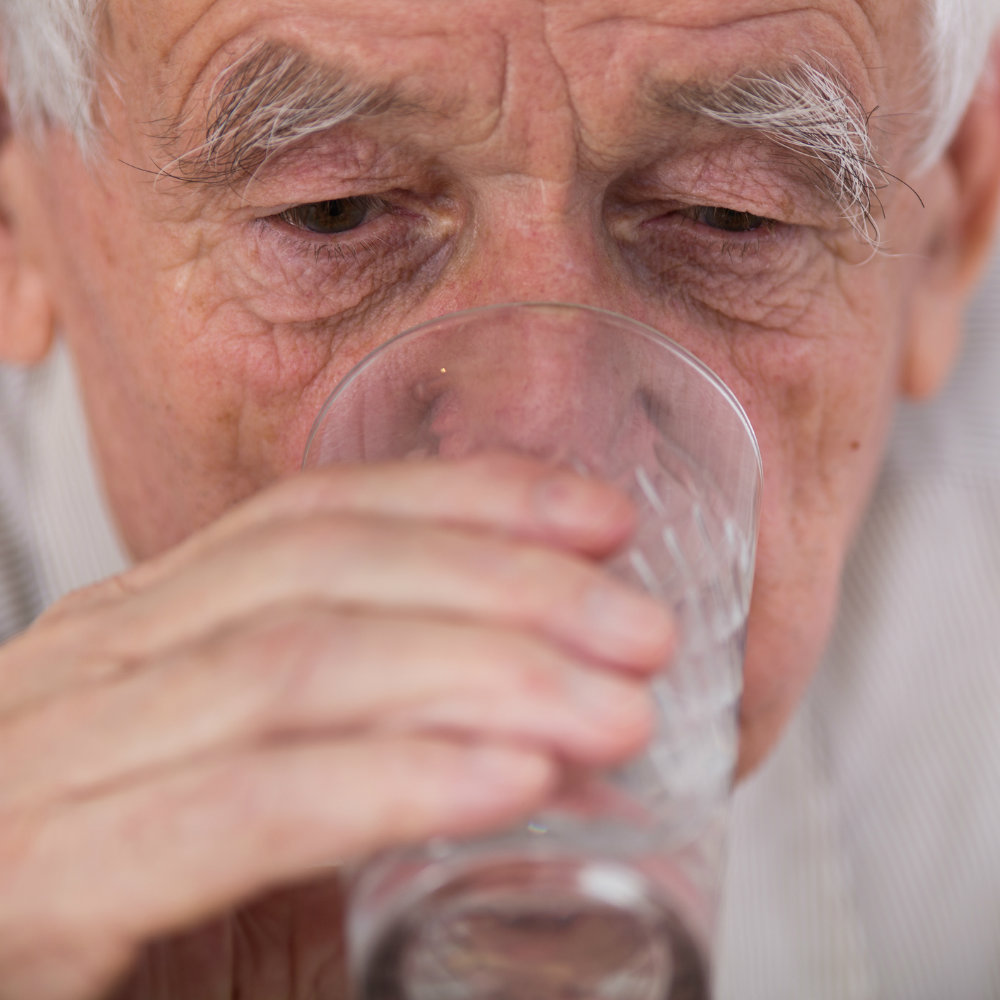 UF neurologist Don Bolser explains why treatment of neurological illnesses such as Alzheimer’s disease should include attention to swallowing problems.

Recall that last time you had something “go down the wrong pipe”? You spent the next several minutes coughing, choking and feeling like something bad was in your throat.

It may seem strange to say this, but count yourself lucky.

Your brain was making you do the right things to keep what you drank or ate out of your lungs. The path for air to enter our lungs, the larynx (or voice box), is very close to the upper esophageal sphincter, the entry point for food and liquids to our esophagus. This close anatomical relationship of these two entry points means the brain must coordinate breathing, eating and drinking to ensure the lungs get only air and the esophagus gets only food or liquids. This coordination happens unconsciously, so we never really think about it until we get food or liquid in our airway.

As it turns out, millions of people with brain diseases, including those with Alzheimer’s, Parkinson’s, Lou Gehrig’s disease, stroke, multiple sclerosis and traumatic brain injury, have impaired swallowing. As a result, they are unable to protect their lungs in the way that a healthy person can.

The result is that millions of brain disease patients are at risk for inhaling food and saliva into the lungs, leading to death by pneumonia or even choking.

Detecting and treating impaired swallowing is important, particularly as the nation’s nearly 70 million baby boomers continue to age. Impaired swallowing is associated with many conditions of the elderly, and it is often severely underreported. Clinicians may not detect it or may see it as a side effect of another condition.

As a neuroscientist who has studied brain diseases, I know of no pharmaceutical companies that have drug discovery programs aimed at restoring weakened swallow and cough. And yet, it’s a major problem.

Hard to swallow, easy to choke

An important part of swallowing is complete closure of the larynx while food is moving through the throat. Disordered swallowing, or dysphagia, limits the ability of the muscles in the mouth and throat to move liquid or food into and through the esophagus and on to the stomach.

This inability to protect the airways and lungs increases the risk of pneumonia or choking.

In addition, many people with brain disorders experience reduced coughing, or a weakened ability to activate breathing muscles to generate airflows that eject material from the lungs. Weakened cough is caused by problems with nerves in our lungs that detect foreign material or with the brain driving the respiratory muscles.

Disordered swallowing can also be caused by problems with nerves in the neck. For example, people who have had cancer of the head or neck often undergo extensive surgery to remove the diseased tissue. This process can inadvertently damage nerves that are important for swallowing.

Sometimes, the swallowing impairment, rather than the primary brain disease, actually leads to death. When swallowing is impaired, it is more likely that material will enter the lungs and trachea during eating or drinking. This is known as aspiration. Aspirated food or drink “seeds” the lungs with material that is coated with pathogens from the mouth. These pathogens are not normally present in the lungs and can cause chronic inflammation and serious bouts of pneumonia.

In patients with acute stroke, severe swallow and cough impairments occur at the same time. Our research has shown that the risk of aspiration due to swallow impairment can be predicted by weakened cough in patients with stroke or Parkinson’s disease. These findings indicate that brain diseases can lead to multiple impairments in how we protect our airways.

Another way of thinking about this problem is that the nervous system has many tools, or reflexes, that it uses to perform certain tasks. Each reflex has a specific function, and the brain coordinates the time of occurrence of each to optimize the result.

Simultaneous impairments of cough and swallow lead to high aspiration risk. This high risk is due to seeding of the lower airways with harmful pathogens that increase the risk of pneumonia. Mortality rates of aspiration pneumonia have been reported of over 60 percent, leading to a US$4.4 billion medical burden from hospitalized patients alone in 1997. Aspiration pneumonia costs as much as $17,000 per hospital admission. Further, this type of pneumonia can occur in as many as half of long-term care residents.

When members of our research team talk to their friends about airway protection and its consequences, everyone seems to have a story. Most center around an older relative who had a brain disorder and the difficulties this person had eating. Often their relative choked when eating or had to eat special thick foods. These are signs of impaired swallow, cough and aspiration.

Speech pathologists specialize in diagnosing and treating swallowing disorders. They often recommend thick foods that are easier to swallow and less likely to penetrate the airways during swallowing. This clinical approach is the most well-accepted.

Some companies market devices that apply a weak electrical current to the neck to improve swallowing. The long-term benefit of these devices is controversial. Further, these therapies have not been shown to enhance a weakened cough reflex.

There are no drugs for the treatment of impaired swallow or cough. It appears that the pharmaceutical industry has not yet recognized the importance of prevention of aspiration in patients with neurological disease in disease outcome.

A team in Japan has promoted a comprehensive protocol using sensory stimuli such as menthol and capsaicin, the pungent ingredient in red peppers, to help elderly people who have serious impairments in swallowing. Their preliminary results show impressive improvements in reducing aspiration pneumonias in these patients.

There is a promising approach based on strengthening breathing muscles that has been shown to improve swallow and cough function in patients with Parkinson’s disease and stroke. This approach is called “expiratory muscle strength training,” and it is easy for health care professionals and most patients to perform. The extent to which this method can prevent pneumonia in at-risk patients is unknown at this time.

In short, while there are some promising approaches, there are no widely accepted therapies for restoring weakened swallow and cough in patients at significant risk of aspiration. Continued research on the fundamental neurological mechanisms of coughing and swallowing will provide a foundation for new therapies to reduce the occurrence and severity of aspiration pneumonia.