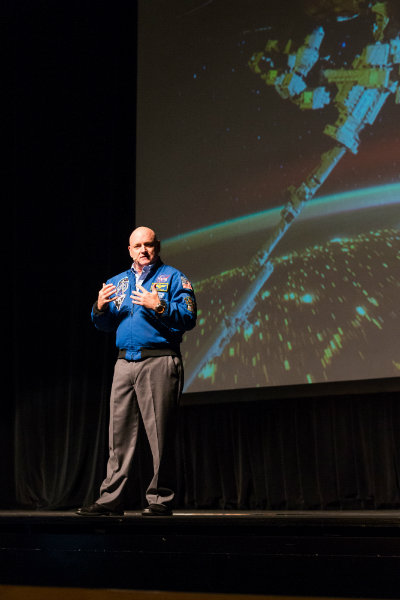 ACCENT, the nation’s largest student-run speakers bureau, hosted the event at the Phillips Center for the Performing Arts and provided free tickets to UF students.

Kelly’s 20 years of working with NASA, paired with his vibrant personality, made for an engaging and thought-provoking presentation. The 52-year-old now-retired astronaut spent nearly a year – 340 days, to be exact -- aboard the International Space Station with Russian cosmonaut Mikhail Korniyenko. Kelly’s stay ended March 1, 2016. During the mission, he set the record for the total accumulated number of days spent in space by an American astronaut: 382.

Kelly illustrated his journey to becoming an astronaut through quirky anecdotes, candid commentary and relatable challenges, saying “it’s not that people decide to be extraordinary, it’s that they decide to do extraordinary things.”

Kelly highlighted moments of failure in his career’s development as opportunities for learning and growth, making them surprising catalysts to his later successes.

“I was ready to take risks, to fail, to make mistakes … I think if you’re not ready to fail then you won’t ever see what your potential really is,” Kelly said. These ideas were especially relevant to his student audience.

Kelly concluded the evening by offering a Q&A opportunity for student audience members. Questions ranged from detailed inquiries about space station procedure to the first food Kelly enjoyed upon his return to Earth—a banana.