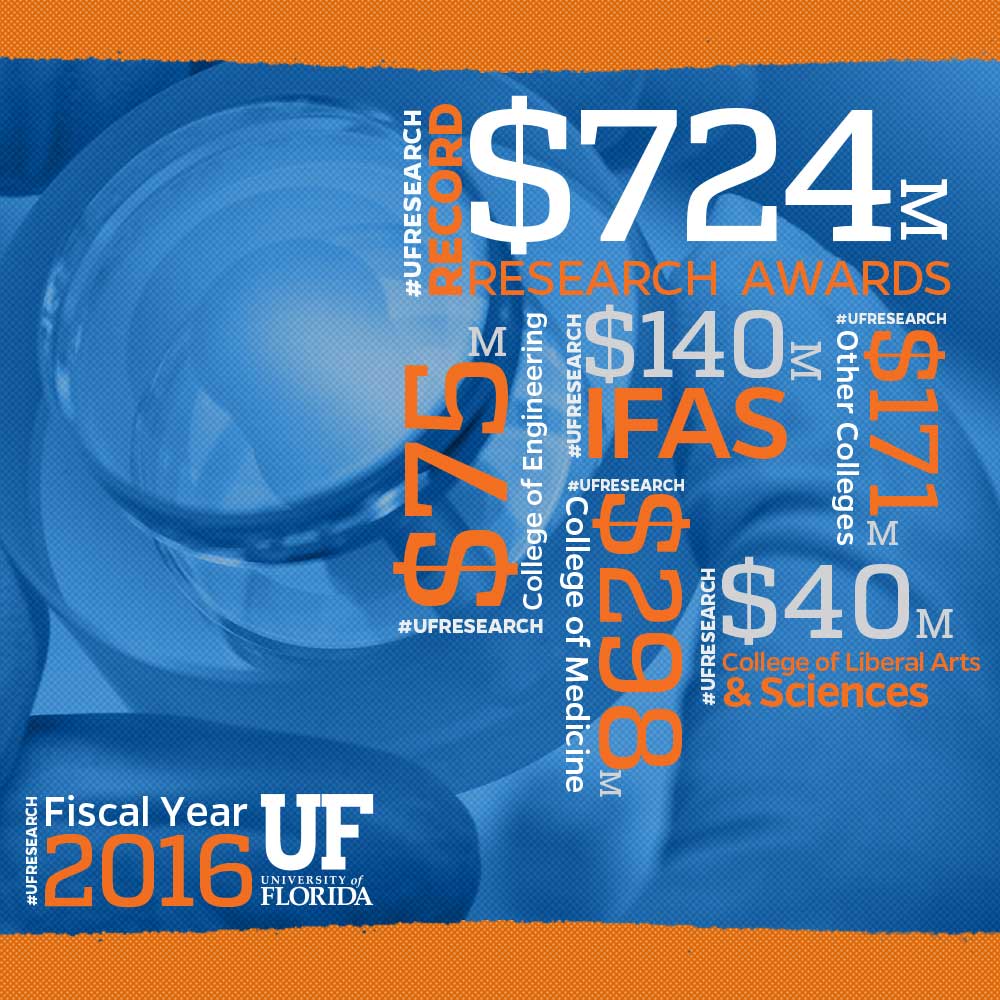 Research focused on Alzheimer’s disease, agricultural pests and economic development was among the thousands of projects funded with a record $724 million in research awards to the University of Florida last fiscal year.

The new total is a 2.4 percent increase over the previous record of $706.8 million set in fiscal year 2015. Over the last decade, awards are up 24 percent.

“I applaud our dedicated faculty members for continuing to raise the bar with this new record in research funding,” UF President Kent Fuchs said. “The competition for this funding is intense, so this record demonstrates their research excellence while adding to UF’s growing stature as one of the nation’s great public research universities.”

About $451 million of the funding came from federal agencies, led by the National Institutes of Health with $178.6 million, a 17 percent increase over last year’s NIH total.

The state of Florida provided another $50 million, up nearly 29 percent over 2015; and foundations and non-profits provided $110 million in support, a 21 percent increase over the previous year. Industry, local governments and other sources funded the remaining $113 million.

“The diversity of our research portfolio has kept us on an upward trajectory for many years,” said David Norton, UF’s vice president for research. “Our faculty continue to be very strategic at pursuing funding from the source that is the best fit for their science – government agency, industry or foundation.”

UF’s College of Medicine in Gainesville and Jacksonville brought in $298 million; the Institute of Food and Agricultural Sciences, or IFAS, received $140 million; the Herbert Wertheim College of Engineering was at $75 million; and the College of Liberal Arts and Sciences received $40 million. The remaining colleges had a combined $171 million.

Notable NIH grants include $4 million to the Institute on Aging to develop strategies to address low-grade chronic inflammation and movement disabilities in the elderly; $3.6 million to the Diabetes Institute to continue its research on type 1 diabetes; and nearly $3 million to the Center for Translational Research in Neurodegenerative Disease to establish an Alzheimer’s Disease Research Center.

“Research grants from the NIH are among the most prestigious recognitions of excellence that biomedical scientists can receive. Competition for NIH grants is a demanding process in which the innovation and excellence of one’s research is assessed by scientific peers against a limited budget,” said David Guzick, UF’s senior vice president for health affairs. “The growing success by UF’s faculty in winning competitive research grants from the NIH is therefore a tremendous testimony to the esteem in which they are held by the scientific community.”

Major U.S. Department of Agriculture grants to IFAS included $4.4 million to develop turfgrass with improved drought resistance; $3.4 million to try to stem the impact of laurel wilt on avocados; and $3.4 million to combat a bacterial disease damaging tomatoes.

“A record year for research awards to IFAS is important in two ways. It means we can accelerate our search for solutions to the challenges faced by farmers, families and all Floridians,” said Jack Payne, senior vice president for agriculture and natural resources and the leader of IFAS. “The awards also signal that the USDA and other funding agencies recognize the quality of our science and the impact our faculty make by improving people’s lives.”

The 50,000-square-foot expansion of the Innovation Hub will provide much-needed space for technology startups near UF, said director Jane Muir.

“Several companies in the Florida Innovation Hub are projecting significant growth in the near future and will need expansion space that is not readily available in Gainesville,” Muir said. “In addition, Phase I is operating at capacity and needs additional space to accommodate demand.”

The largest non-governmental grant was $7.6 million from the Patient-Centered Outcomes Research Institute, or PCORI, for the OneFlorida Clinical Research Consortium to continue to expand a statewide network that links UF with other universities, health systems and patients around the state to address health challenges like concussion, hypertension and teen smoking.

Maddie’s Fund, a pet rescue foundation, awarded the College of Veterinary Medicine nearly $4.2 million to continue to grow the college’s shelter medicine program. The foundation has provided $11 million in support to UF’s program since it was founded in 2008.