A Mixed Response: Floodwaters return to the Colorado River but can release greenhouse gases 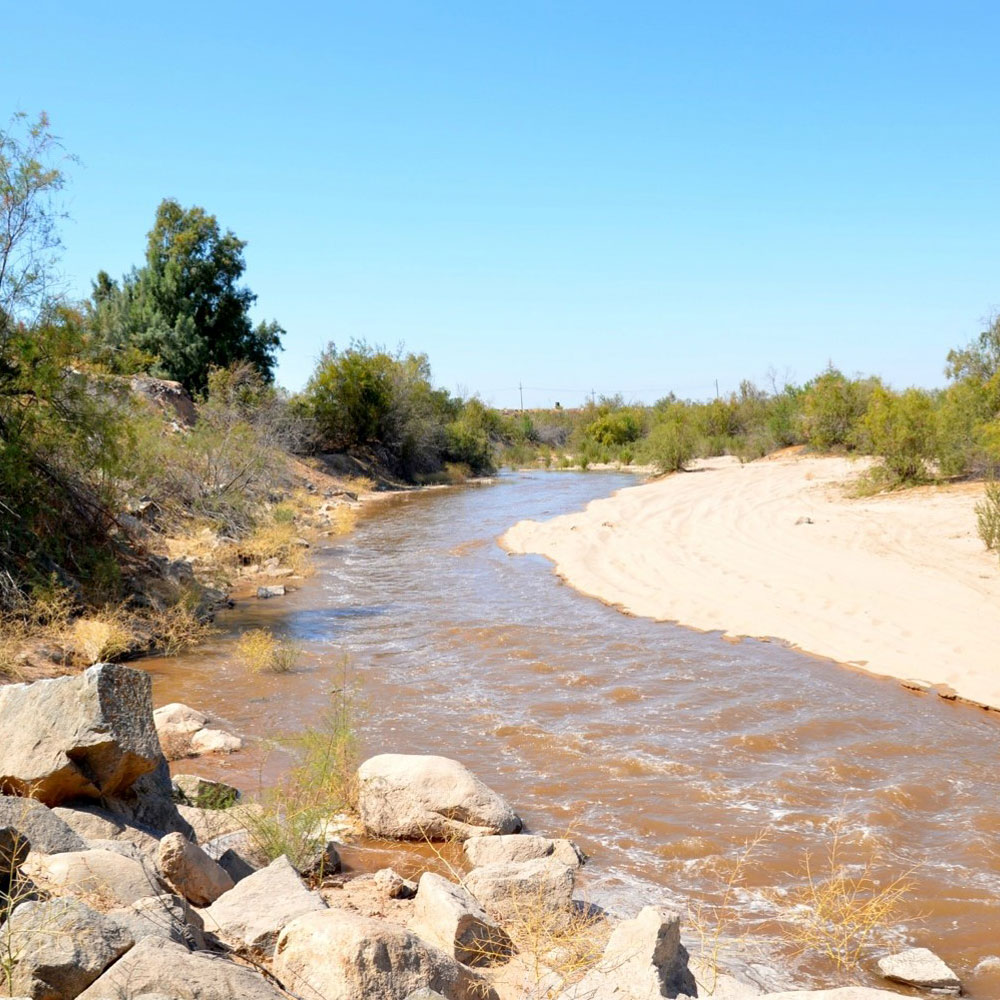 Deliberately flooding riverbeds left parched by dams has great potential to restore wetlands, but may also have a significant unintended consequence: the release of greenhouse gases.

Despite the findings, the pros of returning rivers to their natural courses and flows generally outweigh the cons, but government officials should consider the research when deciding when and how to alter river flows, said Thomas S. Bianchi, a professor of geological sciences at University of Florida and lead author on the study.

“We need to understand this as it relates to the global carbon budget,” Bianchi said.

If you've ever seen an Olympic-sized swimming pool, and can imagine 52,000 of them, you might begin to appreciate the amount of water that was released into the dried-out lower river delta of the Colorado River, as part of an agreement between the U.S and Mexico.  Although this may sound like a lot of water, it is still less than 1 percent of what used to flow down the Colorado before all the dams were built on it.

The overall flooding experiment was supported by the U.S. Bureau of Reclamation, U.S.G.S. (United States Geological Survey), International Boundary and Water Commission/ Comisión Internacional de Límites y Agua (IBWC/CILA), and many foundations and donors. Dr. Thomas S. Bianchi, professor at UF, worked in coordination with Dr. Karl Flessa and his graduate student Hector Zamora at the University of Arizona, who led the sampling effort over the eight-week experiment. Bianchi’s group, funded by National Science Foundation- Hydrological Sciences, which included his graduate student Rory Kates and postdocs Drs. Nicholas Ward and Ana Arellano, along with Dr. David Butman at the University of Washington, and Dr. Peter Raymond at Yale University, focused on how the chemistry of the floodwaters changed over time. They found that re-wetting the dried riverbed contributed to the release of dissolved carbon and greenhouse gases (CH4 [methane] CO2 [carbon] dioxide) to the floodwaters. These increases were largely attributed to the release of these gases from the dry riverbed to the floodwaters and presumably to the atmosphere. The age of dissolved carbon coming out from the riverbed was also established using radiometric carbon dating, and indicated that some of carbon may have been stored belowground for thousands of years, and now released by the infiltration of floodwaters.

River management is conducted by the Bureau of Reclamation and IBWC/CILA and the pulse flow was released pursuant to Minute 319 of the U.S.-Mexico Water Treaty of 1944. Bianchi and his team examined how the rapid and controlled release of 130 million cubic meters of water, from the Colorado River at the Morelos Dam on the border of the United States and Mexico, mobilized carbon. The “pulse” of water temporarily flooded the delta, which had been dry for decades.

The Colorado River currently supplies water to 40 million people living in the rivershed. Heavy demand for agricultural, industrial, and municipal purposes has drained the river, which now only rarely reaches the ocean. This drainage created a dry delta near the U.S.–Mexican border, which allowed invasive plants to edge out native flora and disturbed wildlife habitat. The wetlands of the delta have been reduced to 5 percent of their original size since the construction of the Hoover Dam in the 1930s. Restoring water and sediments to the delta would help restore biodiversity to the region, supply water for agriculture, and rebuild the delta, which could help mitigate storm erosion along the coast.

Greenhouse gases, such as carbon dioxide and methane, help to trap the heat on Earth from natural radiation of the sun. Increasing levels of this atmospheric carbon have contributed to global warming. Carbon dioxide and methane concentrations in the atmosphere have increased by about 30 percent and 50 percent, respectively, since the industrial revolution. So, there remains considerable interest in understanding what controls the cycles of these gases.

Carbon dioxide is one type of inorganic carbon compound: when dissolved in water, it forms carbonic acid, which is known for its use in soda water and sparkling juice, but environmentally, contributes to ocean acidification when high levels of atmospheric carbon dioxide dissolve into the seas. Methane, an organic carbon compound, is trapped in water but easily dissipates as a gas produced by decaying organic matter.

When a large dry riverbed is flooded, these greenhouse gases are released into the water, and presumably to the atmosphere. However, re-wetting the delta may support the growth of native plants, which typically are better able to absorb and store carbon than invasive species, and may offset the carbon dioxide and methane released by flooding.

In short, Bianchi’s team and other scientists working on rivers are interested in assessing the costs and benefits of floods and droughts on natural ecosystems, particularly in a world where the climate and water cycles have become more unpredictable, in part due to global warming. Future research may examine how the duration of the flood affects water chemistry, how controlled flooding may support coastal stability and local fisheries, and how flood pulses compare to establishing a steady minimum water flow to the delta.