A second chance for Cisco 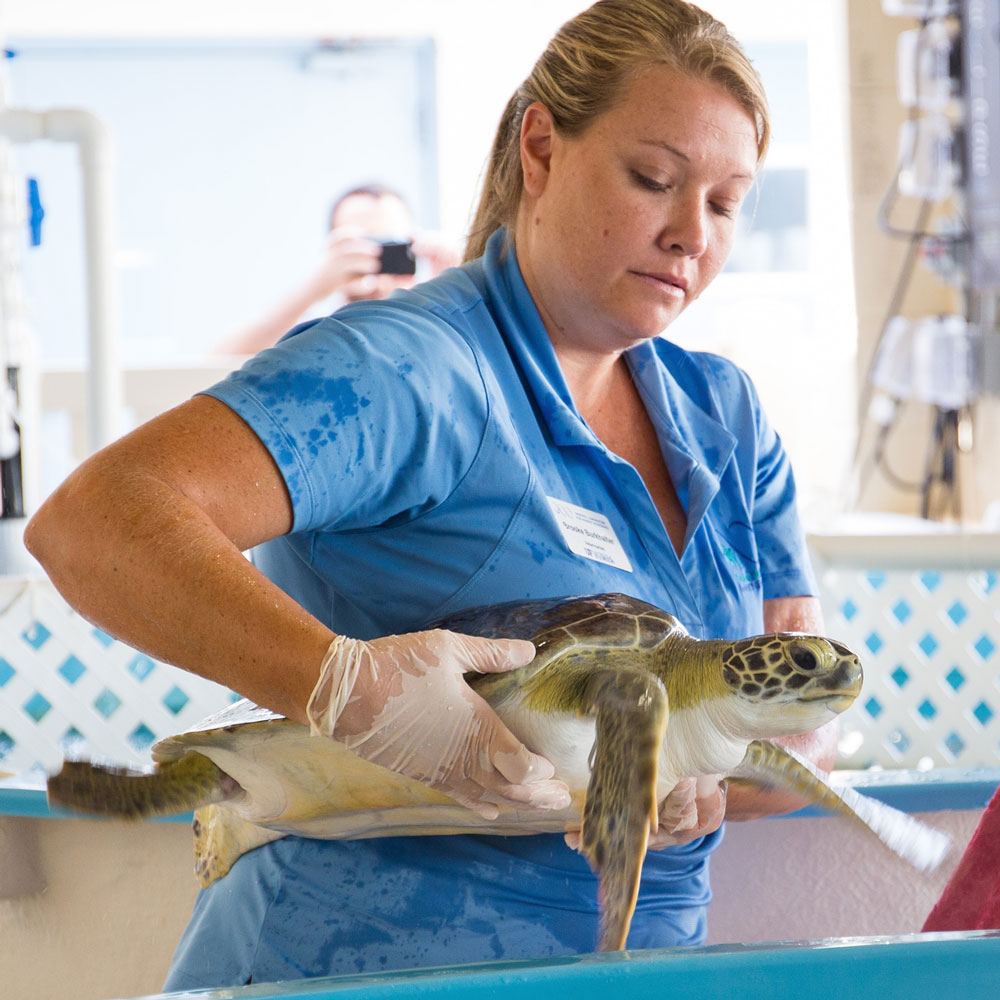 Human impacts have made life tough for Florida's sea turtles. UF is trying to turn the tide.

When the green sea turtle named Cisco Kid washed up on Hammock Beach in Palm Coast, it seemed his luck had run out.

He was anemic, underweight, fighting a blood infection, stunned by the January cold, too weak to swim or eat. Tumors beneath his back flippers sapped his energy, robbing his blood supply and hindering his movement.

One thing was in Cisco’s favor, though: He had come ashore just a few miles from the University of Florida’s Whitney Laboratory Sea Turtle Hospital in St. Augustine, where researchers are working to understand and treat the fibropapilloma virus spreading through sea turtle populations, causing tumors that can hamper their ability to breed, feed, even see.

The hospital's major benefectors, the Condron family, had just donated a $40,000 carbon-dioxide laser to remove tumors like Cisco’s. The surgery could save Cisco’s life, but he was too sick to survive it.

The hospital staff was determined to change that. 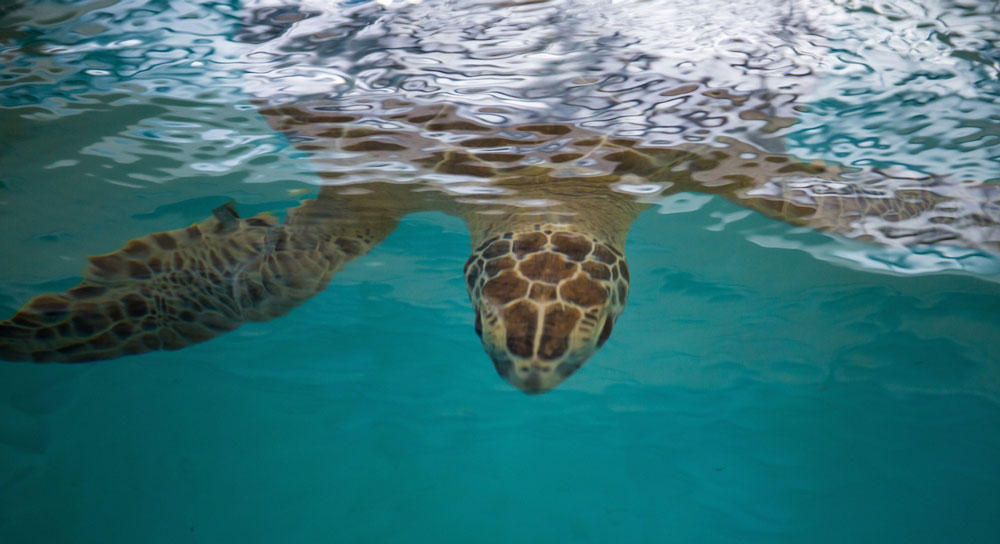 Seven turtles, all with fibropapilloma tumors, paddled around four 1,100-gallon tanks as Burkhalter and her team brought Cisco into the hospital and placed him in a shallow padded pool.

“When they're that weak, they're not able to surface,” she said. “If you put them in deeper water, they'll drown.”

The staff didn’t know if the turtle was male or female, and they never would – juvenile green sea turtles have no outward indication of gender. But when donor Gary Condron chose the name Cisco Kid after a beloved family dog, they came to think of Cisco as a he.

Cisco didn’t fight Burkhalter as she gave him antibiotics and fed him through a tube the team had MacGyvered from a rubber dog toy. His lab tests revealed a red blood cell count less than half of normal. On the 1-5 scale used to rank a turtle’s body condition, Cisco was a 1, the worst possible score. 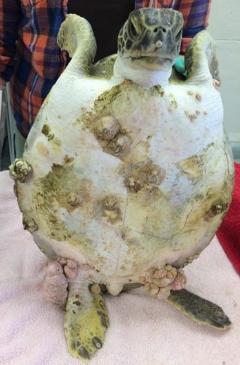 His condition could have been due to the virus, which is related to herpes. Or the virus could have taken hold because his immune system was already challenged. Scientists don’t know how the disease spreads, but they do know it’s spreading, says David Duffy, a Whitney Lab researcher studying potential treatments. The virus occurs naturally in the ocean, but it didn’t seem to impact many turtles until the 1970s. Now the disease has been spotted in turtles all over the world, particularly in the southern United States. Studies have linked its spread to human impact: A study in Hawaii compared the water near a pristine, uninhabited island to the water surrounding a populated island. The virus was present in both places, but only the turtles near the populated area had tumors.

“It’s not a classical viral spread where it goes from one population to another,” Duffy said. “There’s a clear link back to people. Something we're doing to the aquatic environment is activating the virus and promoting tumor growth.” 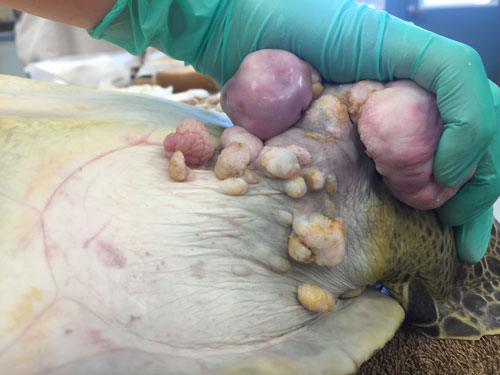 Cisco's tumors before surgery.Green turtles – one of the five species found in Florida – are particularly vulnerable. The tumors start in their adolescence, when they venture back from the middle of the Atlantic Ocean to forage along coastal waterways. When they’re healthy, green turtles can live more than 100 years. To have a shot at that kind of lifespan, Cisco needed help.

‌A CT scan donated by a human clinic delivered some much-needed good news: Cisco’s tumors hadn’t spread to his internal organs. But as the days went by, Cisco refused even the most tempting treats – herring, mackerel, shrimp. Seven days a week, the staff fed him formula made of powdered fish and seaweed. Then, three weeks into his treatment, he began to resist coming out of the water for his treatments.

Turtles, like cats and dogs, have distinct personalities, Burkhalter says: Some, like their young patient Squidlips, are curious and friendly, sticking their heads out of their tanks to greet their caretakers. Others are standoffish. Cisco was beginning to show some spunk.

“When I saw that he didn’t want to be handled, that was a good sign,” she said. “It was the first time I felt like I knew he was going to survive.”

Even for outgoing turtles, the hospital staff tries to limit interactions that could habituate turtles to people. They devised a system of PVC pipes to hold cucumbers and peppers at the bottom of the tanks to mimic feeding off of grasses on the sea floor, and they toss fish and squid into the water instead of feeding the turtles by hand.

The staff devises enrichments to keep the turtles busy and keep stress at bay. They freeze food inside ice cubes to make dinner more of a hunt than a handout. They build obstacle courses for the turtles to swim through and back scratchers for them to rub their shells on.

“We’re doing a lot of research on how to reduce their stress, because stress works against you when you’re trying to heal,” Burkhalter said.

It’s just one type of research going on at Whitney Lab, which opened in 1974.

Here, scientists look to marine organisms for clues to how the senses function, how regeneration works and how these discoveries could someday apply to humans. The hospital followed in 2015 and has treated more than 60 injured or ill turtles since opening. Supported by private donations, the university and the Sea Turtle Conservancy’s Florida Sea Turtle Grants Program, the hospital works in conjunction with UF's Archie Carr Center for Sea Turtle Research, which was recently named as part of a Disney initiative to protect these endangered animals.

Along with rehabilitating sick and injured turtles and researching fibropapilloma, the hospital raises public awareness about the importance of sea turtles and the issues they face.

“Helping Cisco as an individual isn’t going to save the species,” Burkhalter said. "What it does is give people something to see and bond to. They learn the story and realize the bigger picture – the impact of marine debris, pollution, climate changes. All of these things aren’t just hurting turtles, they’re hurting the world. If we lose turtles, it upsets the balance of the entire ocean.”

On April 11, Cisco lay on his back, flippers splayed, under anesthesia. Burkhalter stood over him, ready to use the laser on a patient for the first time.

She had prepared for this moment in continuing-education sessions, practicing on oranges and chicken breasts. Unlike traditional surgery, which can cause too much blood loss, the laser cauterizes as it cuts away the tumors, resulting in less pain, less bleeding and faster healing.

A less-invasive treatment could be on the horizon: Duffy, the fibropapilloma researcher, is genetically profiling tumors like Cisco's to identify medicines that could fight them. Just as in humans, determining the genes involved in creating the tumors can lead to treatments that target those genes. That could lead to a drug that could prevent the tumors from recurring after surgery, or point to the environmental factors switching on the cancer genes in the first place.

“I beg him every day to hurry up,” Burkhalter said. 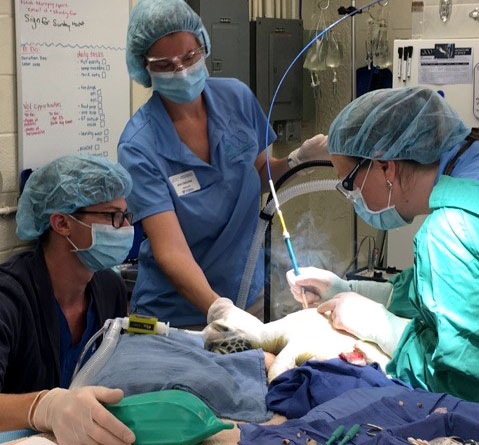 Burkhalter uses a laser to remove Cisco's tumors.As a camera crew from Discovery Channel Canada looked on, Burkhalter began removing Cisco’s tumors. Then her heart sank. Although the procedure was going perfectly, she saw that the tumors had grown deep under the skin, almost down to the knee joints. She continued removing them, hoping Cisco was strong enough to recover from the more-extensive surgery.

With a waterproof bandage wound around both back flippers, Cisco slept off his anesthesia resting on foam noodles in a plastic kiddie pool.

The next day, he ate.

A few days later, he was swimming in his regular tank with his roommate, Mudpie.

On a Monday morning in June, more than 200 people lined up on the beach to cheer Cisco home.

Burkhalter's daughter waved a hand-lettered "Goodbye Cisco" poster signed by the kids in the Whitney Lab’s marine-biology summer camp. A hospital volunteer live-streamed the festivities to a second-grade class in England. Inside a 27-gallon storage bin, Cisco rested on towels after being lifted from his tank, loaded into a Jeep and driven across the street to River to Sea Preserve. 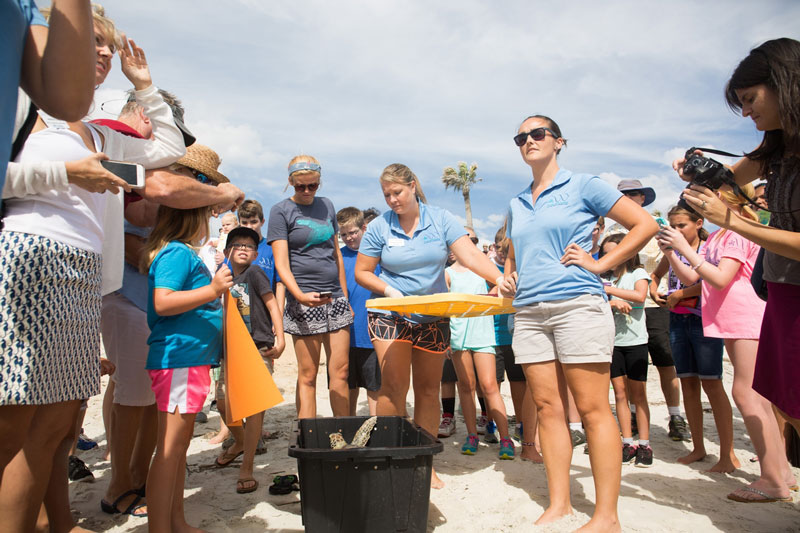 After his surgery and recovery, when she determined that Cisco’s tumors weren’t growing back, Burkhalter contacted the Florida Fish and Wildlife Conservation Commission, which chose the date and place for his release. Weekdays are best, she explained, because there are fewer people and boats in the water that could disorient or endanger a newly released turtle. But the crowd that turned out for Cisco’s release gave the staff another opportunity to convey that our actions – collectively and individually – have an impact on sea turtles.

“We need to be more aware of impact people are having on the marine environment,” he said. 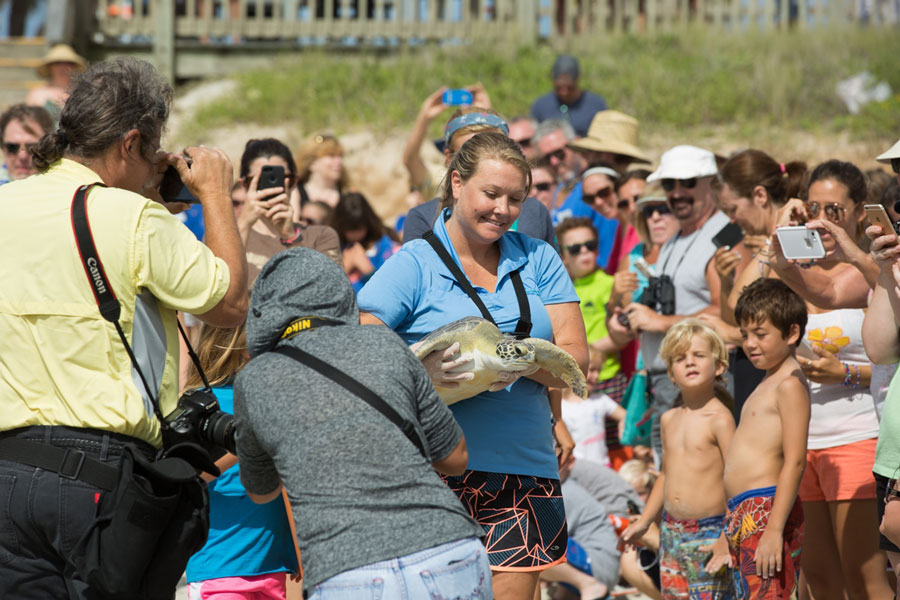 Burkhalter lifted Cisco and carried him toward the crashing surf, his flippers flapping faster and faster as he neared the water. She waded in until she was waist deep. A wave crashed over her, but she held on to Cisco. She wanted to get him out just a little deeper, beyond the worst of the waves and into calmer waters. After months of nursing him back to health, it was one last gift she could give him, a tiny head start in the vast ocean.

She lowered him into the water and let go.

Cisco darted north, raising his head and taking three deep breaths before diving beneath the waves.

“They don’t tend to turn around and say thank you. There's no little wave goodbye," Burkhalter said. "But the faster they leave, the stronger they are, and that makes us happy.”

After the crowd dispersed, the team regrouped in the hospital’s surgical suite. Burkhalter and veterinary care manager Rachel Thomas scrolled through comments on the hospital’s Facebook page, where people as far away as Hungary wished Cisco well. Thomas erased Cisco’s name from a whiteboard diagram of the hospital’s four tanks, leaving a blank space next to Mudpie.

At 11:03, less than an hour after Cisco’s release, the phone rang. It was the Volusia Marine Science Center an hour south in Ponce Inlet, asking if the hospital had an opening for another green sea turtle with fibropapilloma tumors.

The team began rallying volunteers to transfer the turtle to the hospital. In a few hours, they would start again.