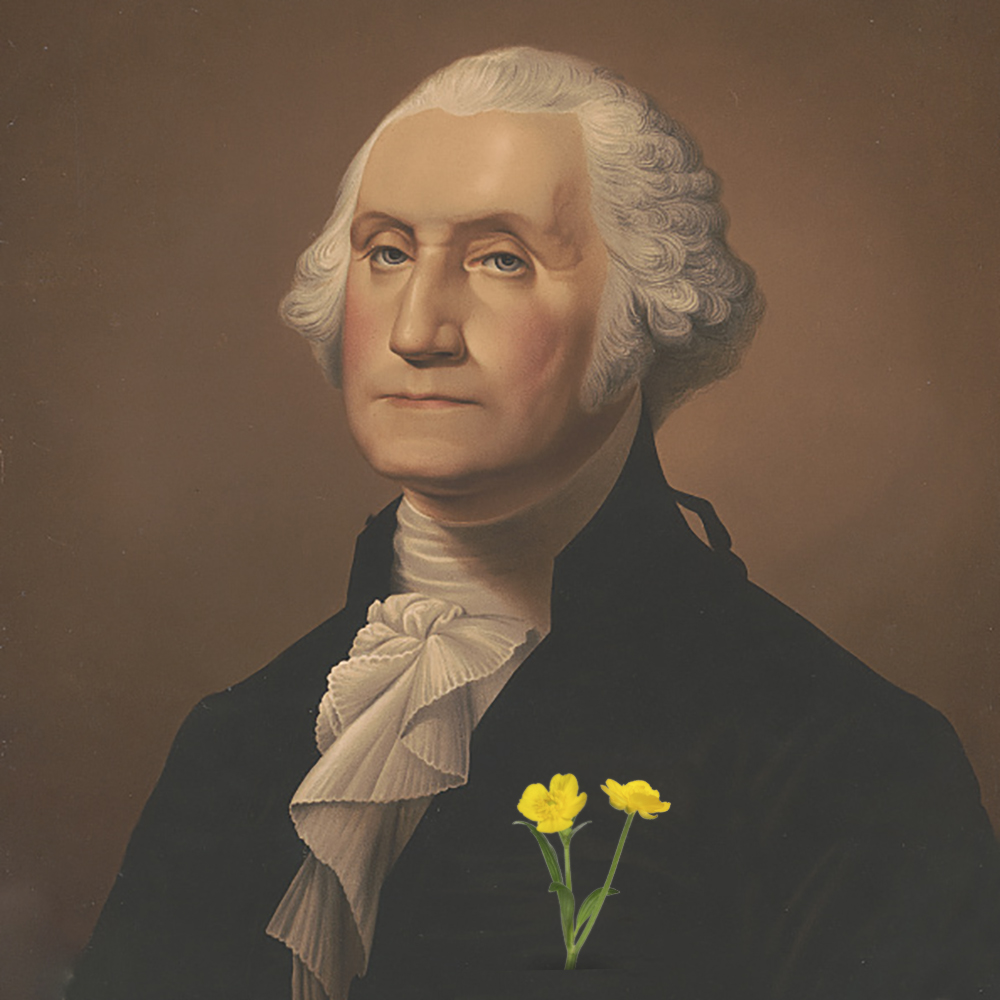 Two men set out on the Potomac River in 1892 looking for fossil plants from the days when dinosaurs roamed the Atlantic Coast nibbling on conifer leaves and ferns. Their paddling came to a halt when up ahead in a bluff on George Washington’s Mount Vernon estate, a section of chocolate-colored stone caught the eye of paleobotanist Lester Ward and volunteer Victor Mason. Within minutes of digging, 105-million-year-old branches, leaves and seeds spilled from the mudstone, known for preserving fine details—a plant scientist’s gold mine. Scraps of partial fossils littered their findings. Among them was a tiny, seemingly insignificant leaf, thus beginning the modern history of George Washington’s little buttercup.

Except for a brief mention in Ward’s 1905 book, the leaf sat unstudied in a drawer at the Smithsonian Institution for the next 118 years. Then on a spring day in 2013, University of Florida paleobotanist Nathan Jud stumbled upon it while rifling through a drawer labeled “ferns.” He wasn’t looking for ferns, however.

The postdoctoral researcher with the Florida Museum of Natural History on the UF campus has an eye and a passion for spotting misidentified flowering plants. He has created a list of 14 characteristics that crack the code for distinguishing the leaves of flowering plants from those of non-flowering plants. What’s so important about fossil flowers? Jud says they are the key to solving one of the most famous scientific enigmas of all time—Charles Darwin’s “abominable mystery.”

Twenty years after publishing his “On the Origins of Species,” finding the answer to how flowering plants, or angiosperms, managed their sudden takeover of the planet still plagued Darwin. Writing to his friend Joseph Hooker, he called the rapid development an “abominable mystery.” More than a century later, scientists like Jud are still searching for answers.

Removing a thin layer of dust from the fossil leaf, Jud quickly realized it was actually an ancestral herb related to buttercups and poppies—not a fern at all. 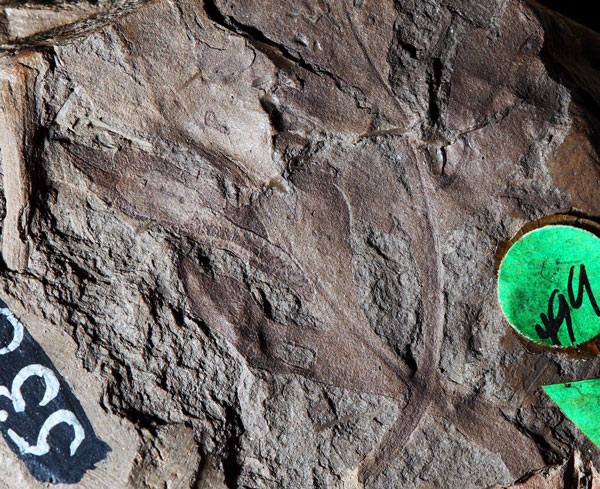 "Sometimes the complex leaf shapes of herbs can look superficially like ferns, but I had recently developed a set of features for distinguishing between ferns and flowers,” Jud said. “I looked at details like the leaf’s teeth and tips of its lobes. Ferns never have this particular type of gland at the tips of the teeth, but flowering plants often do. That was the key thing that jumped out at me right away.”

The new genus and species Vernifolium tenuiloba described online this month in the journal Cretaceous Research is a new piece to the nearly complete puzzle that will finally lay Darwin’s conundrum to rest, said Jud, lead author of the study.

“The new species adds to an emerging picture that shows the appearance of flowering plants was more gradual than Darwin thought, but still quick by geological standards,” Jud said. “The ancestors of flowering plants were thought to be trees, but turns out many of the extinct ancestral forms, like our leaf fossil, were actually small herbs that rarely preserve well. The rarity of these fossils contributed to the impression that flowering plants diversified more suddenly than what actually occurred.”

Solving the mystery of exactly when and how angiosperms appeared will provide scientists with a better understanding of the characteristics and environments that allowed them to thrive. This knowledge could help predict how these plants, which provide the majority of our food and oxygen, might react to climate change and other threats, as well as their influence on our own evolution and that of biodiversity worldwide, Jud said.

Jud’s leaf is also revealing new information about the simultaneous diversification of flowering plants and insects.

A closer look at V. tenuiloba revealed damage to the leaf resembling the kind inflicted by insects. Jud immediately took the fossil to study co-author and entomologist Jae-Cheon Sohn with the Smithsonian Institution who identified the damage as that of leaf-mining flies.

Leaf mines occur when mother flies lay eggs and the larvae eat the leaf’s insides, leaving a distinct trail. Based on the age of the Cretaceous rock from which the fossil was pulled, the two scientists confirmed V. tenuiloba holds the oldest-known evidence for leaf-mining flies, extending their fossil record 40 million years.

“Fossil evidence of plant and insect interaction in general is rare, so damage like this is a great source of evidence for the parallel diversification of the two groups,” Jud said. “One of the interesting things about flowering plants is the relationships they have with insects, and that includes herbivores, pollinators and disbursers. We want to understand how those relationships have evolved, which relates directly to modern issues in things like agriculture and conservation,” Jud said. 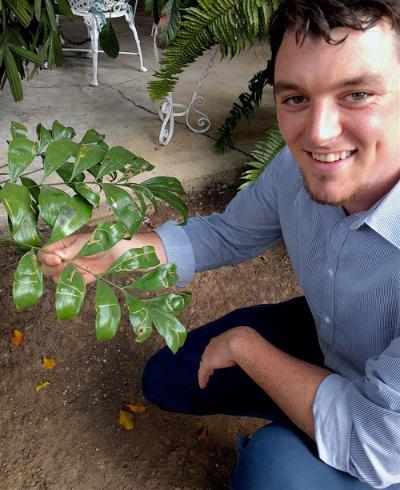 Nathan Jud shows a cycad with damage from leaf-mining flies.‌Modern leaf-mining flies eat mostly the leaves of two groups: buttercups and their close relatives, and sunflowers and their close relatives. By testing the DNA of modern species, previous researchers concluded that the flies first evolved to eat sunflowers and their relatives, and later some acquired the ability to eat buttercups. The new buttercup ancestor has reversed that theory, demonstrating that flies were mining the leaves of buttercups and their extinct relatives long before the sunflower group had evolved, Jud said.

“It’s not all about genetics,” he said. “You need the fossil data to answer deep questions—deep in terms of time. We can’t access the DNA of extinct organisms, so sometimes fossils can tell us surprising things.”

Sohn said the new fossil shows collaborations between scientists studying living organisms and those studying extinct ones are critical for illuminating ancient and modern ecological interactions.

Scientists like Jud and Sohn strive to reconstruct the history of life and unravel its mysteries. As they do, “each new fossil discovery, especially from early time periods, like when flowering plants first appeared, can contain a lot of information to help piece together that story,” Jud said.