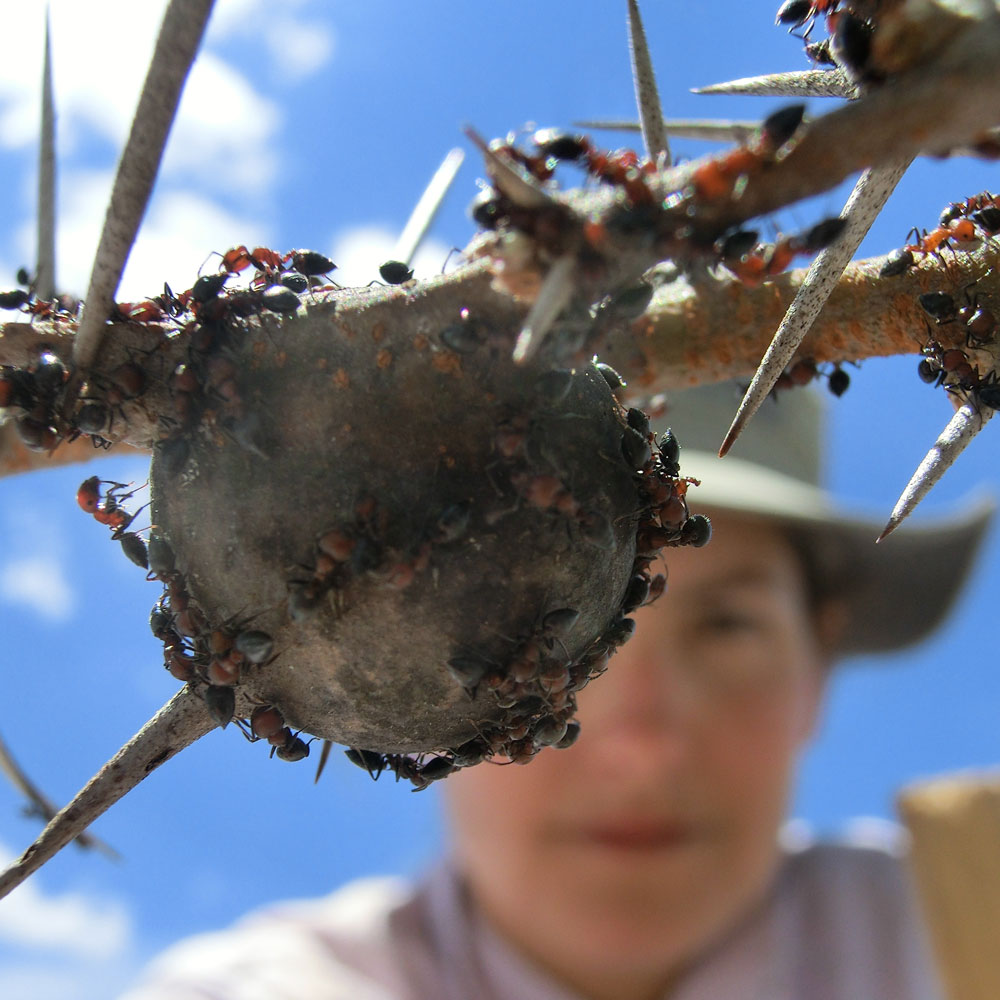 On an African plateau surrounded by flat-topped trees as far as the eye could see, wind whistled through the acacia thorns like someone blowing across a bottle. Kathleen Rudolph was more concerned with the ants raining down on her from the trees. The hat, long sleeves and garden gloves the University of Florida researcher wore for protection didn’t help.

The acacia ants she studies, Crematogaster mimosae, use their fearsome bite to defend their host trees against large animals such as elephants and giraffes that eat the trees’ leaves. Even elephants’ thick skin can’t protect them from the ants, which bite them inside their trunks.

“They really seem to have a knack for finding your soft tissue,” Rudolph said. “It’s a nasty business.”

Ants are also aggressive toward each other, fighting to the death over their tree territories. While the consequences for losing colonies are stark — loss of territory or colony death — Rudolph and UF postdoctoral research associate Jay McEntee wanted to understand the costs to the winners.

After a fight, victorious colonies have to defend their newly gained territory with a workforce heavily depleted by fighting. In a new study funded in part by a National Geographic Society/Waitt Fund Grant and published in Behavioral Ecology, Rudolph and McEntee found that victorious colonies might offset this challenge by recruiting members of the losing colonies to help.

In experiments based at Mpala Research Centre in Kenya, researchers instigated ant wars by tying unrelated colonies’ trees together, counting casualties in tarps placed below. By simulating the browsing of a large mammal, they discovered that victorious colonies are less able to defend their host trees after fights. After analyzing the DNA of nearly 800 ants, they discovered that fighting changes the genetic make-up of victorious colonies.

Long viewed as fortresses of cooperating sisters, where relatives of the queen work for her benefit, Rudolph’s work demonstrates that non-relatives can become part of the colony — and potentially defend its residents and territory.

Researchers were further surprised to find that, in some cases, fatal fights with thousands of casualties do not produce a distinct winner. Instead, colonies cease fighting and fuse together, with the queen of each colony still alive.

“Colonies are battling so aggressively that many individuals die, but then they are able to just stop fighting and form a lasting truce,” Rudolph said. “It’s pretty remarkable.”

How they know to stop fighting remains is a mystery, showing the need for research on recognition systems. One possibility, Rudolph says, is that fighting changes the odors ants use to distinguish nestmates from potential invaders.

“If so, the updated or blended cues shared by prior foes may help end aggressive responses,” Rudolph said.

Sorting out these processes could contribute to our understanding of an intriguing aspect of physical conflict – that animal combatants become more similar biologically through combat. That can be true for humans, too: A 2013 study showed that the skin bacteria communities of competing roller derby teams converge during bouts, not unlike Rudolph's findings in ants.

"Physical combat not only yields biological winners and losers," Rudolph said. "It can alter the identity of its combatants."