The science of stealing 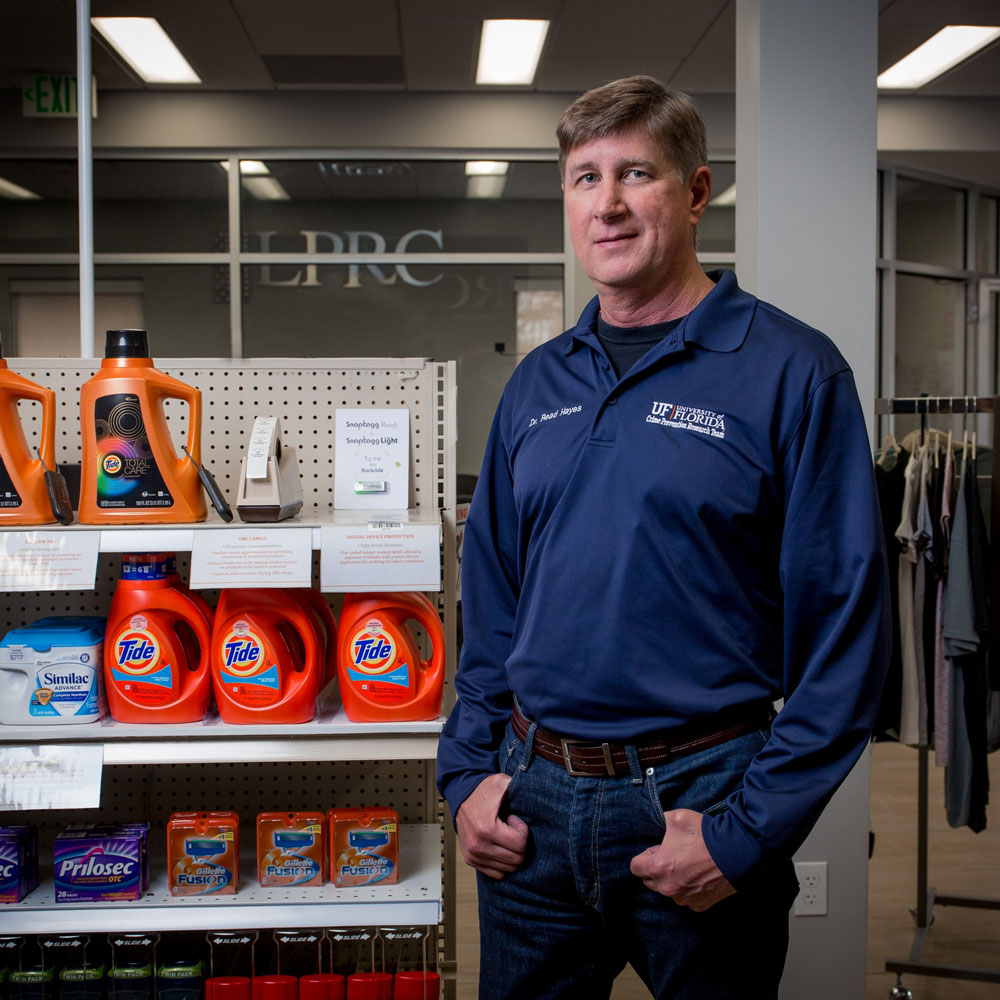 The four thieves swapped stories, comparing what and how they like to steal. One prefers to enlist the help of employees to tip him off when a delivery arrives. One heads for the self-checkout lane, where he pretends to scan the items in his cart for any nearby cameras. Another simply loads big-ticket items onto his cart and rolls them out the front door.

They were pros, speaking with confidence and even a little bit of swagger, knowing they’re usually two steps ahead of efforts to stop them. And in the audience, 200 crime-prevention experts with companies from Walmart to Louis Vuitton were taking notes.

When you think of retail theft, you might envision teenagers shoplifting candy bars. It’s much more, says Read Hayes, co-director of the Loss Prevention Research Team at the University of Florida. More than $44 billion in merchandise goes missing across the United States each year, driving up prices for paying customers and filling the coffers of gangs and terrorist organizations. In cities around the United States, a growing number of violent drug store robberies are putting employees and customers at risk, while data breaches siphon off in minutes what would take years to steal from stores.

Through collaborations with computer engineers, sociologists and political scientists across campus, Hayes works to thwart these criminals – both in his role at UF and as director of the Loss Prevention Research Council, which hosted the conference where criminals shared their secrets.

“It’s an opportunity to use academic research to solve real-world problems," Hayes said. “Retail crime can be very dangerous and violent, but even when it’s not, it affects everyone.”

Hayes discovered just how violent it could be more than 30 years ago while looking through a ceiling tile in a department store in Orlando’s Fashion Square Mall. Working as a part-time store detective, Hayes was watching the sales floor from the stockroom above when he noticed a woman taking clothes off their hangers and giving them to an accomplice, who put them in his bag while a third person acted as a lookout.

“I called my manager, and she and I approached the three of them. One by one, they started resisting, then attacking. An off-duty deputy sheriff ran over, and they started fighting him. An Orlando Police Department officer heard it on his radio and ran in. By the end we had at least six or eight officers. One of the offenders was a big, powerfully built guy who was able to throw people around.

"It took four or five guys to get him in handcuffs. They zip-tied his feet, and he still managed to kick out the side window out of patrol car. When it was over, two departments of the store were leveled. There was blood."

He was lucky to escape with just cuts and bruises. A few months later, he was pepper-sprayed by a shoplifter who was stealing suits. But those incidents didn’t deter Hayes from a career in crime prevention. The following year, he joined an undercover operation right out of “21 Jump Street,” tasked with stopping the sale of crystal meth at Osceola High School. During an internship with the Florida Department of Law Enforcement, he ran customs intercepts in a helicopter and rounded up motorcycle gangs in Daytona. While earning a criminology degree at UF, he went undercover again, this time with a drug task force.

“Riding around in a car, you’re not looking at things from a criminal’s perspective. When you’re undercover, you’re always trying to get into their minds: how they live, how they think, what they talk about, what they like and don’t like. Because of that, I know how to relate to them.”

That comes in handy for interviews with active offenders, where researchers like Hayes – who has a doctorate in criminology and has shared his expertise on “Oprah” – learn how to stop retail crime.

But why would thieves want to help him prevent stealing?

Part of it is ego, Hayes says – the temptation to brag about what they’ve gotten away with. They also get gift cards. What they don’t get is immunity, but they don’t seem concerned about being arrested for the crimes they’ve just confessed to in front of an audience of hundreds.

Throughout the interview at the loss-prevention conference, the four active offenders on the stage detailed a bewildering array of scams and strategies, from switching price tags and printing fake coupons to fraudulent gift card and baby registry scams. They relayed their fondness for shoplifting at “soccer mom o’clock” – the time of day when stores are too busy for employees to effectively prevent theft.

“You guys are overrun. You have no idea what’s going on,” said one.

It’s not all braggadocio. A woman recounted stealing medicine for her children. They talked about theft driven by addiction. They insisted there are certain stores where they would never steal, with Mom and Pop stores high on the list.

“Growing up in a really small town, there were a lot of individual stores owned by people I knew,” said an offender in his 20s. “The retail I was giving them was going back into my community.”

They also avoid stealing from stores where employees seem happy. Disgruntled or disengaged employees are less likely to notice theft – and more likely to look the other way if they do, they said. And when an employee looks you in the eye and starts a conversation, it’s often game over for thieves, said the sole female shoplifter on the stage.

“Partly it's the customer service. It's also that if someone has looked at me and talked to me, they can pick me out of a lineup.”

Recruiting and vetting active offenders is a job that’s never done, as criminals leave the area, drop out of contact or wind up in jail. But it’s worth the hassle, Hayes says, for the information the group gains – not just in interviews, but on the streets.

Mike Scicchitano followed a thief around a local drug store, watching him work. As director of UF’s Florida Survey Research Center, Scicchitano usually gathers and analyzes data at more of a remove. But as part of the Gainesville-based Loss Prevention Research Council, he and his colleagues observe criminals in what they refer to as “the wild.”

With the blessing of both the criminals and the store staff, the researchers watch thieves as they decide what, how and if to steal, though the shoplifters stop short of actually leaving with the goods.

“It’s really interesting to watch the good ones and see what they notice,” Scicchitano said.

Factors from the height of the shelves to the placement of the cash registers influence criminal decision-making, and UF and the LPRC want to understand them all. Through partnerships with 20 chain stores in Gainesville, LPRC researchers test innovations in theft prevention, watching how customers and criminals alike react. Just as interesting to the scientists are the deterrents that criminals don’t notice. Some, like hidden cameras, are meant to be invisible. But most are meant to be seen, because the goal of retail theft prevention isn’t to catch thieves, but deter them from stealing in the first place.

“Catching shoplifters is dangerous and costly, and a liability that companies don’t want anything to do with,” Hayes said. “It’s about getting people with bad intentions to do a U-turn. To do that, they need to perceive a clear and present danger to their success and their freedom.”

The danger isn’t only to criminals: As armed robberies at drug stores spike, so does the potential for violence to customers and staff. The trend has drawn the attention of the United States Drug Enforcement Administration, whose 2015 National Drug Threat Assessment summary shows prescription drug theft increasing around the country, with California, Nevada, New Mexico and Oklahoma seeing more armed robberies in 2014 than 2013. After analyzing three years of data, Hayes and his colleagues will present their findings at a March summit at with representatives from CVS, Rite Aid and Walgreens.

“We review video of these incidents like football coaches, analyzing it and looking for patterns,” Hayes said. “The incident data and the videos give us a clear focus for our research – how to detect and deter criminals in the parking lot, at the store entry and the pharmacy counter.”

A good deterrent makes a would-be criminal reconsider, but isn’t so intrusive that it makes paying customers feel uncomfortable. But even after following more than 800 criminals, as Hayes has, it’s not easy for a law-abiding person to see the world the way a criminal does. That’s why the researchers have adopted a medical model in their research, looking at retail crime the way doctors look at disease.

“When you try to prevent heart attacks, you look at how much a role is played by diet, exercise, stress. You have to understand how the disease works to design the cure and evaluate how the cure is working. We apply the same principles to understanding how bad guy stuff works and how our tools work. We even call the deterrent a treatment.”

One way is to make stealing an item too difficult. If you’ve bought razor blades and had to twist a knob to extract them from a plastic tube, you’ve experienced this approach firsthand. Another tactic is to make stealing too risky, perhaps by sending a signal when an item is removed from its shelf or package. It could be a text message to a store clerk, a loud noise, even a photo that goes to store staff. The third type of deterrent renders item useless or undesirable – think of those tags designed splatter ink on stolen clothing.

None of those options is effective, however, if a shoplifter doesn’t understand what they are. That’s where Hayes’ theory of “See – Get – Fear” comes in. Criminals have to first see the deterrent, understand what it does, and fear that it will work well enough to land them in jail.

Active offenders provide real-world insight not only into what they see, get and fear, but why they steal particular items. In addition to razor blades, Tide laundry detergent, Crest Whitestrips, baby formula and the heartburn medication Prilosec are also favorite targets worldwide — raids on organized-crime warehouses have turned up stockpiles of these items, Hayes says. These items check many of the boxes defined by researchers as desirable to thieves: They’re easy to carry and hide, available in a wide variety of stores, expensive to purchase and simple to resell. But thieves aren’t the only ones keeping an eye on them.

Amid security cameras and shelves of locked-down liquor bottles, twenty criminals took turns manipulating two razor-blade displays. A major retail chain had commissioned the bake-off – held at the LPRC’s simulated store in Innovation Square – to determine which theft deterrent would work best. The criminals tried their best to defeat each model, scoring them on risk and difficulty, and the retailer installed the winner in stores nationwide.

Deterrents like this don’t just make buying razor blades a little more painful. They also help slow the billions lost to theft and fraud each year, a problem that seems to be growing, according to the National Retail Security Survey, begun by Hayes in 1990 and directed by UF criminology professor Richard Hollinger.

Crime prevention begins before customers even enter the store: Hayes and his colleagues are evaluating cameras that can report the license plate of a car parked in front of a store that might be poised for a getaway, as well as facial-recognition technology so sophisticated that it can detect the age, gender, even mood of a would-be criminal. Another camera can recognize known offenders and alert staff to their presence.

“Sometimes,” Hayes said, “the awareness that the store is aware of them is enough to make them turn around and leave.”