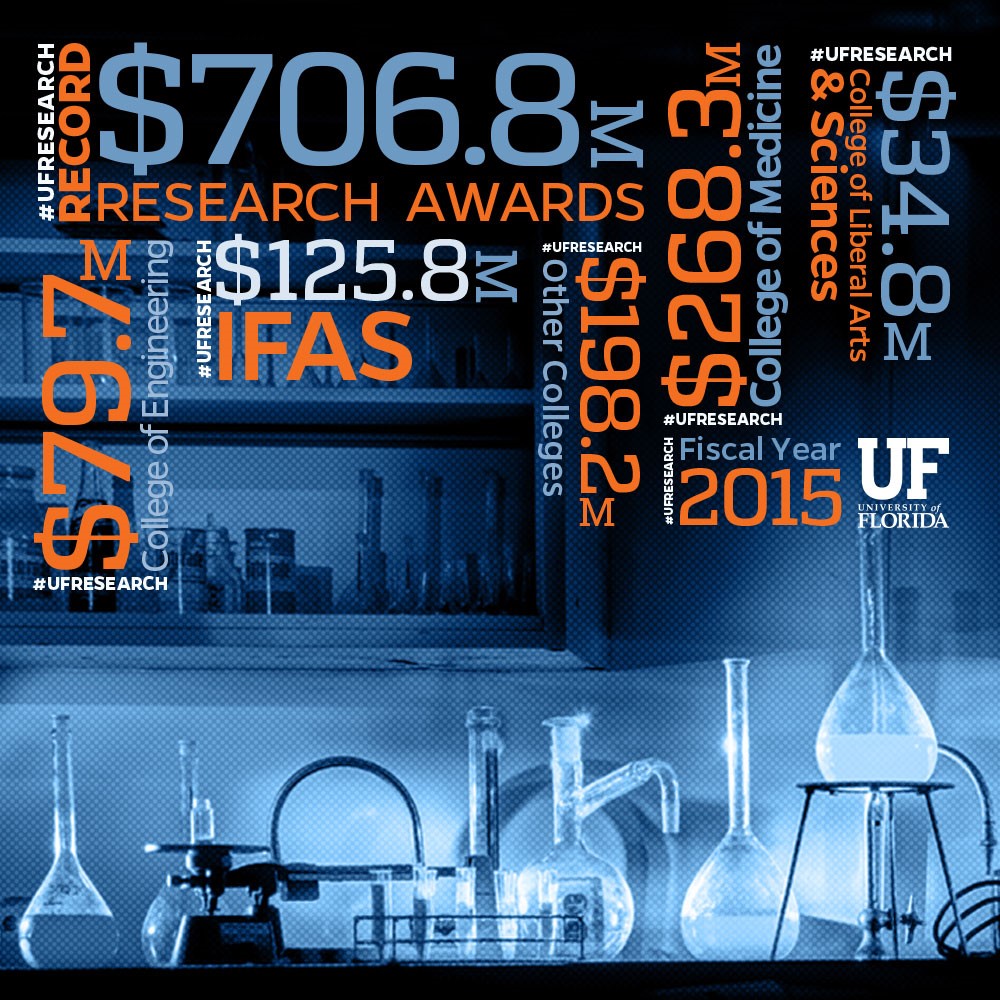 “The success of our relationships with industry last year are a testament to our researchers’ ability to move new discoveries from conceptualization to commercialization,” said David Norton, UF’s vice president for research. “Leading engineering, health and agricultural companies know UF can help them advance the science of their industries more effectively.”

Funding from the federal government topped $432 million in 2015, led by the National Institutes of Health, with $152 million, up 7 percent over 2014, and the National Science Foundation, also up 7 percent to $47 million. State of Florida and local government agencies provided another $46.9 million. Foundations and non-profits awarded $90.4 million.

The new total marks a 32 percent increase in UF research awards since 2005-06.

Notable awards during the year included nearly $5 million in funding from the National Science Foundation and industry to create the Multi-functional Integrated System Technology, or MIST, Center in the College of Engineering to research the next generation of “smart” electronics. As a designated NSF Industry/University Cooperative Research Center, the MIST Center will receive over $880,000 from NSF and upwards of $4 million from industry and government partners to help power the “Internet of Things.”

“This research will directly impact the quality of life for a number of our veterans,” engineering Dean Cammy Abernathy said, “and in doing so, we will further develop our faculty’s already outstanding work in neuroprosthetics. This kind of research exemplifies how UF works for the ‘Gator Good.’”

“UF/IFAS has more than 150 scientists working to find viable solutions for Florida citrus producers,” said Jack Payne, senior vice president for agriculture and natural resources. “These funds support research that has shown promise for both short- and long-term methods to fight greening. They are an investment in the future of the industry.”

The College of Medicine secured a total of $8.4 million in funding for hepatitis C research from seven pharmaceutical industry leaders—Janssen Pharmaceuticals, Gilead Sciences, Merck, Bristol Myers Squibb, Genentech, Glaxo Smithkline and Roche Molecular Systems. This funding is largely concentrated in support of the international HCV-TARGET project, which collaborates with multiple pharmaceutical companies and the FDA to gather data from thousands of hepatitis C patients as part of an ongoing effort to cure the liver disease.

HCV-TARGET is led jointly by Nelson and Michael W. Fried, a professor of medicine at the University of North Carolina at Chapel Hill.