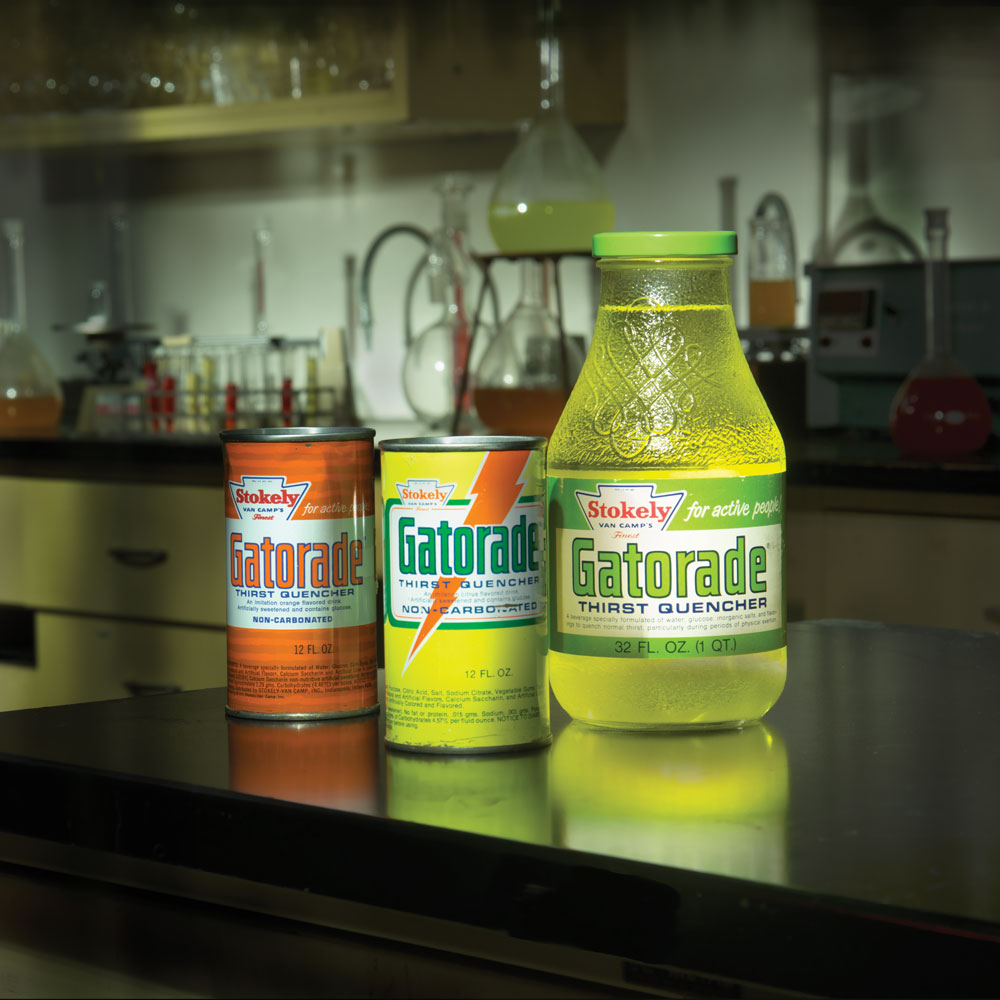 The research question posed to University of Florida professor J. Robert Cade, M.D., and his research fellows in 1965 was a simple one: Why were so many Gator football players getting sick in the unrelenting Florida heat?

“That question changed our lives,” Cade would later tell reporters, because the answer led him and his team to develop an innovative product that forever changed athletic performance, launched a new industry, helped people suffering from dehydration and sparked a legacy of innovation that persists at UF today -- Gatorade.

Numerous activities will be held Saturday, Oct. 3 at the UF vs. Ole Miss game to celebrate the anniversary. Prior to the game in the FanFest area outside the stadium, visitors can check out the Gatorade Fuel Truck or the UF Health booth for fun activities and T-shirts. During the game, the inventors of Gatorade and other UF leaders will be recognized during a pregame ceremony on the field.

At the time Gatorade was invented, the researchers’ goal was simply to develop something to help the Gator football team stay hydrated in the heat.

“Several football players were in the emergency room because of heat stroke,” said de Quesada, who noted that Gatorade was a side project for the team, which at the time was more focused on the bourgeoning use of hemodialysis and kidney transplantation. “The concept at the time was that if you were engaged in strenuous exercise, you could not drink water because it caused vomiting. The idea was if you create a solution and give it to the players, they would be hydrated much faster.

“We came up with a solution that could be absorbed quickly. It was very simple.”

With the permission of then-UF coach Ray Graves, the researchers tested the beverage on the Gators’ “B” team. Although the taste took some time to be perfected, the results of the fledgling sports drink were promising and seemed to help the team on the field. By 1966, the Gators had an 8-2 regular season record and had won the Orange Bowl for the first time, and many thought Gatorade played a role in that success. The Florida Times-Union famously wrote “One Lil’ Swig of That Kickapoo Juice and Biff, Bam, Sock -- It’s Gators, 8-2.”

Today, Gatorade, now owned by PepsiCo, is the official sports drink of the National Football League, the National Basketball Association, Major League Baseball and more. Within UF, the invention of Gatorade has cultivated another lasting legacy -- a culture of innovation. The example set by Gatorade’s inventors has influenced generations of Gator researchers to be persistent in their pursuit of discovery and to aim big.

“What Bob Cade did for the university was make everyone else realize that someone working quietly on something interesting and relevant to them could make a difference,” said Nikolaus Gravenstein, M.D., the Jerome H. Modell, M.D., professor of anesthesiology in the UF College of Medicine. “You could be in any discipline and make a difference.

“It is one of our reasons our UF Office of Technology and Licensing is the size it is, because there are so many people who say ‘I can do that, too.’”

Mark Segal, M.D., Ph.D., the J. Robert Cade professor of medicine and division chief of nephrology, hypertension and renal transplantation in the College of Medicine, said Cade’s work has influenced many in his division.

“I truly believe this division is innovative, and that innovation has its origins with Dr. Cade,” Segal said. “He never accepted the status quo. We shouldn’t accept the status quo, either.”

Royalties from Gatorade also have funded more than $250 million in research projects across the university and notably within the College of Medicine, where Cade was a faculty member in the department of medicine division of nephrology, hypertension and renal transplantation until his death in 2007.

In 2014, UF Health researcher Michael Lauzardo, M.D., received $200,000 from the Gatorade Trust to open a tuberculosis lab in Gressier, Haiti. Haiti has the worst rate of tuberculosis infection in the western hemisphere. At the lab, UF researchers are performing rapid diagnostic tests to more quickly diagnose patients, training Haitian lab technicians to perform these tests and conducting research to answer crucial questions related to the transmission of the disease and why some strains have become resistant to well-known treatments.

“We want to move research forward and address how to best provide drug-resistant TB therapy in a difficult environment, how to best get specimens to a lab, and how to get people who live in remote areas complicated lifesaving therapy. This is an area where Haiti can be a leader,” said Lauzardo, director of the Southeastern National Tuberculosis Center, chief of the UF division of infectious diseases and global medicine and a member of the Emerging Pathogens Institute. “Gatorade’s funding has helped us do something novel and unique and efficient that moves research forward.”

Gatorade royalties have funded many pilot projects throughout UF, helping researchers get their work off the ground or establish labs. One such project that has come to full fruition is the Whitney Laboratory for Marine Bioscience, which received a $30,000 grant from Gatorade to assist with its opening in 1974. Although the grant was small, the seed funding has paid off in big ways. Researchers at the Whitney Lab, located by the Atlantic Ocean in St. Augustine, Florida, specialize in understanding marine creatures to benefit human health.

For example, in 2014, Whitney researcher Leonid Moroz, Ph.D., became the first scientist to conduct genome sequencing of fragile marine creatures, such as rare comb jellies, in real time while aboard a ship. Because of their delicate bodies, these creatures cannot be safely shipped to the lab, so the researchers brought the lab to them. The research could lead to better understanding of the mechanisms at work in these creatures and could lead to new drug discoveries.

Gatorade’s influence also has spawned numerous discoveries at UF benefiting sports medicine. Gravenstein and his team developed air-cooled football pads to combat heat illness in athletes. The technology is now used in the NFL. Other UF researchers such as Jay Clugston, M.D., in the College of Medicine, are studying ways to prevent and reduce concussions in athletes.

“(Gatorade) infected people with the spirit of discovery,” Gravenstein said. “I am convinced the best is yet to come.”

For de Quesada, looking back on the invention he, Cade, Shires and Free devised five decades ago, what makes him the most proud is Gatorade’s use off the field, helping children recover from dehydration caused by vomiting and diarrhea.

“Babies, used to die because of severe diarrhea and vomiting. There was little they could do. With the use of Gatorade, that problem was solved,” he said. “We never claimed that Gatorade is a medication. But it can be used to hydrate people who need hydration for medical reasons. That is one of the great satisfactions I have, is how many lives it has saved.”