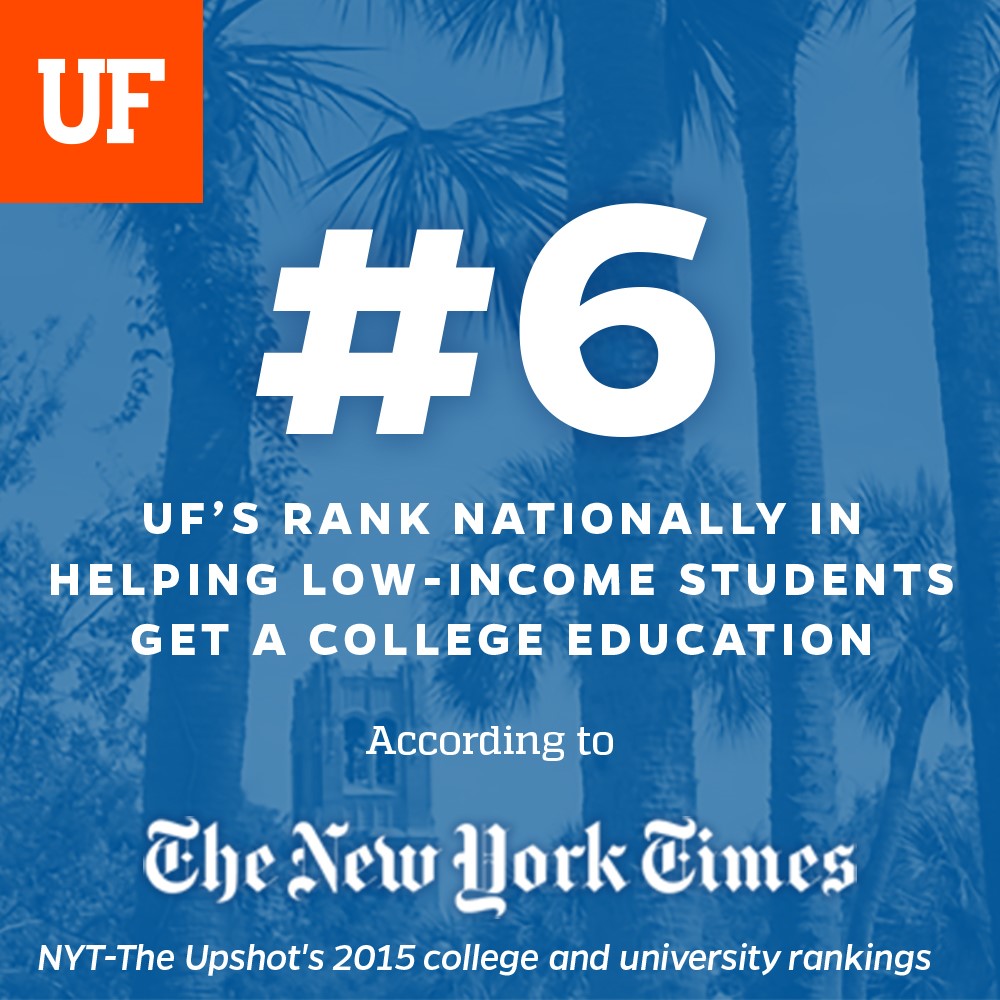 The University of Florida is one of the best schools in the country -- public or private -- at helping low-income students get a college education, according to the New York Times, which ranked UF No. 6 in its 2015 College Access Index.

The University of Florida is one of the best schools in the country -- public or private -- at helping low-income students get a college education, according to the New York Times, which ranked UF No. 6 in its 2015 College Access Index.

The rankings were presented Wednesday night during the New York Times Schools for Tomorrow conference hosted by David Leonhardt, editor of the Times venture “The Upshot.” They are based on the share of students who receive Pell grants, which typically go to families making less than $70,000; the graduation rate of those students; and the price that colleges charge both low- and middle-income students.

The complete rankings can be found here: http://www.nytimes.com/interactive/2015/09/17/upshot/top-colleges-doing-the-most-for-low-income-students.html?_r=0

UF President Kent Fuchs welcomed the news and credited his predecessor for helping to make UF more accessible to high-performing students of all economic backgrounds.

Former UF President Bernie Machen created the Florida Opportunity Scholars program in 2006 to provide financial support for Florida students who are the first generation in their families to go to college and whose family income is less than $40,000 a year. The program has helped nearly 3,600 students since its inception.

“President Emeritus Machen had remarkable vision when he created the Florida Opportunity Scholars program,” he said. “I’m proud that the University of Florida is recognized as a national leader.”

“Making a college degree possible for all students, regardless of their financial means, represents the very best of what higher education is all about,” she said.

The rankings were created using the following:

Pell grad share for each college -- the average share of the freshman class that received a Pell grant in 2011-12, 2012-13, 2013-14 and 2014-15, multiplied by the graduation rate for recent Pell recipients. Later years count more; not all colleges released 2014 data. Graduation rates for Pell students at some colleges are estimated.

Net price for middle-income students -- covers tuition, fees, room and board, after taking into account federal, state and institutional financial aid, and it applies to students who come from households earning between $48,000 and $75,000 a year and qualifying for federal aid. Loans and wages from work-study jobs are counted in the net price as part of the students’ cost.

The College Access Index -- a combination of a colleges’ Pell graduates and net price, compared with the average school. (The index is based on the net price for both the $48,000-to-$75,000 income range shown here and the $30,000-to-$48,000 income range.) A college with an average score on the two measures in combination will receive a one. Scores above one indicate the most effort.

Endowment per student -- for the year 2012-13 and includes graduate students.