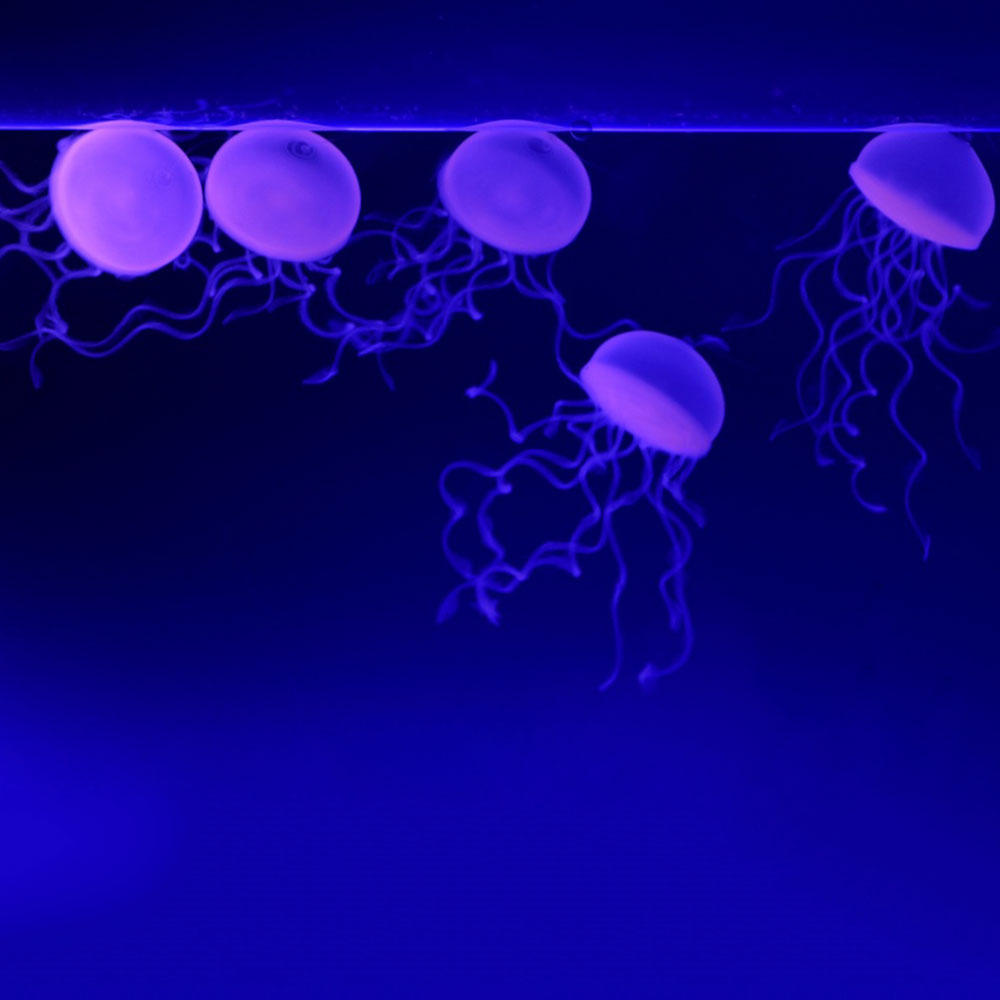 A University of Florida researcher exploring different techniques for 3-D printing has invented a method for manufacturing materials as soft as a cloud in a way never before possible.

The discovery by assistant professor Tommy Angelini turns traditional engineering on its head and opens the door to a brand-new discipline in mechanical engineering, said David Hahn, chair of UF’s department of mechanical and aerospace engineering.

Angelini came up with the idea to use microscopic hydrogel particles as a medium for 3-D printing of soft matter. These particles are 99.8 percent water and 20 times smaller than the diameter of a human hair. He found that he could manufacture soft materials into shapes more fragile than anything found in nature, all with structural integrity. The discovery is reported today in a paper in the journal Science Advances.

Professor Greg Sawyer, a co-author with Angelini, said the discovery will require new tools, theory and modeling techniques in mechanical engineering. Hahn said much of that work will take place in the College of Engineering’s new Soft Matter Engineering Research Group, which already has attracted collaborators across several disciplines. The group’s work also has attracted financial support from two international companies intrigued by the prospects for soft matter manufacturing.

“In simple terms, a hundred-plus years that we’ve built a foundation on in traditional mechanics is largely off the table with soft matter,” Hahn said. “It really is a whole new frontier of engineering.”

‌Angelini said the printing medium is the key. Printing a soft object in three dimensions had been out of the question because, by its nature, 3-D printing requires an object to solidify layer by layer, with the printing tip depositing a material such as a plastic or metal, which hardens to provide its own support. A top-heavy object like a jellyfish, for instance, would be too soft to print using traditional 3-D methods because the thin tentacles on the bottom would not support the bulk at the top. Even if you printed the jellyfish upside down the thin, flexible legs could never stay still in a fluid or stand upright.

Angelini, however, decided to try 3-D printing in a medium of densely packed, microscopic hydrogel particles, or granular gel for short. The granular gel provides a stable, water-based environment that provides support for soft objects. As the printing tip injects a fluid into the granular gel, the gel traps the fluid in place, allowing for deposition of subsequent layers of fluid, without regard for support.

Angelini has used the new method to create numerous objects, including a jellyfish and a hollow, tubular knot, which could not be printed outside the granular gel environment.

“What if I could print you a structure that never solidified but it still held into place? That’s a new idea. It’s no longer about solidification, it’s more about placing things in space and leaving them where you put them. They aren’t going to move,” said Angelini, who conducted the work using his National Science Foundation Early Career Development Award, NSF’s most prestigious award for promising junior faculty. “This level of control is the foundation of all manufacturing.”

Sawyer, pointing to one of the laboratory jellyfish, adds, “Nobody in the world can make that jellyfish. We make them everyday. When we have soft matter manufacturing, we can make things, and then it is the realm of the engineer. It’s kind of like an industrial revolution.”

It’s a revolution that has attracted attention outside engineering. Neurosurgery professor Frank Bova said he is excited about using the technology for education, perhaps creating artificial brains and other phantom organs that medical students can use for hands-on experience.

“For years, we have made models of bone and cartilage, but we’ve never been able to print soft tissue models,” Bova said.

“With this process, we can take a brain scan with a tumor and make tissue that looks like that of a real patient, and that will help us better train surgeons,” Bova said. “One problem with teaching medical students and residents is having the right case at the right time. Complicated cases come in when you’d rather be teaching simple things, so this process allows us to create a library of appropriate cases that can provide practice at the appropriate time in a student’s medical education.”

Bova said he has faith in the process in part because he has seen it work. He sent Angelini a scan of his brain and got back a soft matter model.

The objects printed in the lab so far are orders of magnitude softer than any man-made object. Angelini says he doesn’t know of a lower limit to the mechanical integrity of the objects the lab can make, and Sawyer adds, “We can make a cloud.”

A tantalizing question, Sawyer says, is what will be the smartest thing to do with this technology. For their part, Sawyer and Angelini are developing ways to print living cells using the granular gel technique.

“In science, you’re either leading or you’re following, and you hope that if you do things right, every 10 years or so, you get a chance to lead for a while,” Hahn said. “With this new discipline we will be in the lead, and we are seizing the opportunity to make it a big strategic thrust for UF.”