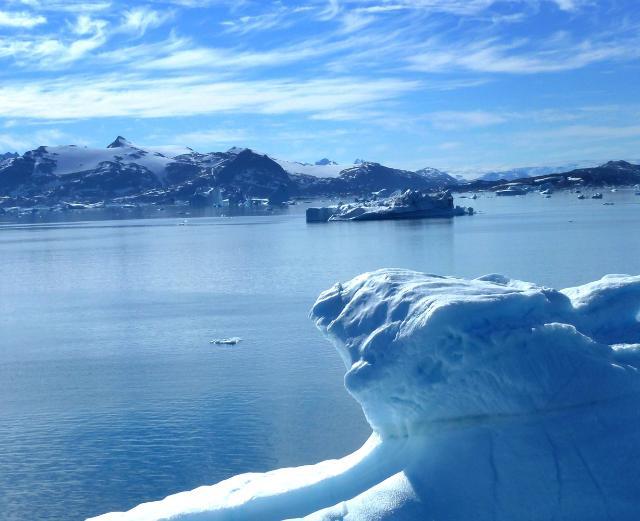 When past temperatures were similar to or slightly higher than the present global average, sea levels rose at least 20 feet, suggesting a similar outcome could be in store if current climate trends continue.

Findings published in the journal Science showed that the seas rose in response to melting ice sheets in Greenland and Antarctica, said lead author Andrea Dutton, a University of Florida geochemist.

“This evidence leads us to conclude that the polar ice sheets are out of equilibrium with the present climate,” she said.

Dutton and an international team of scientists assessed evidence of higher sea levels during several periods to understand how polar ice sheets respond to warming. Combining computer models and observations from the geologic record, they found that during past periods with average temperatures 1 to 3 °C (1.8 to 5.4 °F) warmer than preindustrial levels, sea level peaked at least 20 feet higher than today.

“As the planet warms, the poles warm even faster, raising important questions about how ice sheets in Greenland and Antarctica will respond,” she said. “While this amount of sea-level rise will not happen overnight, it is sobering to realize how sensitive the polar ice sheets are to temperatures that we are on path to reach within decades.”

The researchers concluded that sea levels rose 20 to 30 feet higher than present about 125,000 years ago, when global average temperature was 1 °C higher than preindustrial levels (similar to today’s average). Sea level peaked somewhere between 20 and 40 feet above present during an earlier warm period about 400,000 years ago, when global average temperatures are less certain, but estimated to be about 1 to 2 °C warmer than the preindustrial average.

During those times, atmospheric carbon dioxide levels peaked around 280 parts per million, but today’s levels are around 400 ppm and rising. The team of researchers looked at the last time period when carbon dioxide was this high – about 3 million years ago – but couldn’t get a confident estimate on sea-level rise, in part due to land motion that has distorted the position of past shorelines.

The researchers also sought to understand how quickly sea level rose and which ice sheets may be most susceptible. They acknowledged that the rate of sea-level rise associated with polar ice sheet retreat is not well known, and that this is an important target for future research. Developing a better sense of which ice sheet sectors were most susceptible in the past, as well as how quickly this process occurs, could inform how policymakers plan for and mitigate sea-level change.