This gorgeous moth is an invasive plant’s worst nightmare 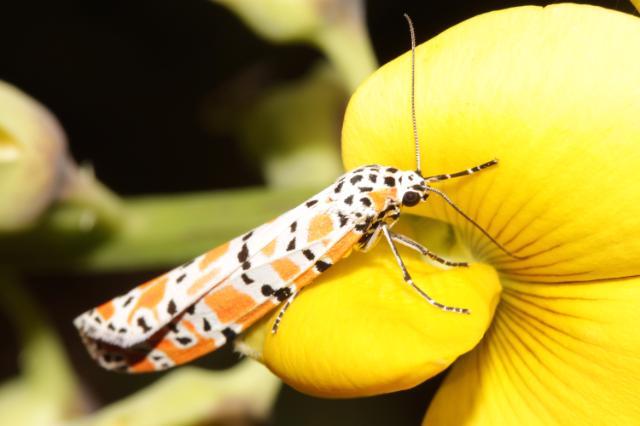 The bella moth, pictured on the flower of an exotic Crotalaria retusa, is changing the plant’s ecology as it feeds on the seeds of this invasive plant. Florida Museum of Natural History photo by Andrei Sourakov

Taming an invasive plant that's 8 feet tall and poisonous is no small feat, especially if you're a tiny moth.

The bella moth does just that, says Andrei Sourakov, a University of Florida lepidopterist who studies how the moths are evolving to feed on the seeds of exotic rattlebox plants.

The tall, yellow-flowered plants in the genus Crotalaria were likely introduced about 100 years ago as a cover crop. They add nitrogen to the soil, suppress weeds and nematodes and reduce erosion, but can also poison livestock and overrun native plants. Some species of rattlebox have been documented growing among crops, which could contaminate food products like cereal and tea.

“Once a species is introduced, they may take on a life of their own,” said Sourakov, the collections coordinator at the Florida Museum of Natural History’s McGuire Center for Lepidoptera and Biodiversity.

The plant would overwhelm many Florida habitats if it weren’t for the tiny pinkish-red moth keeping it at bay, he said.

In 2011, Sourakov stumbled upon one of Florida’s 10 exotic species of rattlebox growing near the edge of a wooded area in northwest Gainesville. A year later, he noticed the plant had dwindled more than 90 percent. The bella moth was eating the plant's poisonous seeds, which help it produce chemical defenses that make the moths and their eggs unpalatable to would-be predators.

“The moth has always fed on native species of Crotalaria,” said Sourakov, showing a drawer with hundreds of bella moth specimens that he reared in the lab. "Now they've switched from the native to the invasive species. It is clear that moths are able to feed on the invasives and I am studying how these new host plants effect moth biology.”

Sourakov published his account of these interactions in the journal Natural History. With the help of UF undergraduate students, he continues to explore the ongoing coevolution of plants and moths.

“In this day and age, some of these rattlebox plants probably wouldn’t have been introduced because people are more aware of the negative impacts of introducing exotic species and how they can become a nuisance,” he said. “But in this case, we have a rare success story. A native species of moth does a good job of keeping these plants under control, and provides a great research model for me and my students.”

For an extended version of this story, visit the Florida Museum of Natural History's Science Stories.