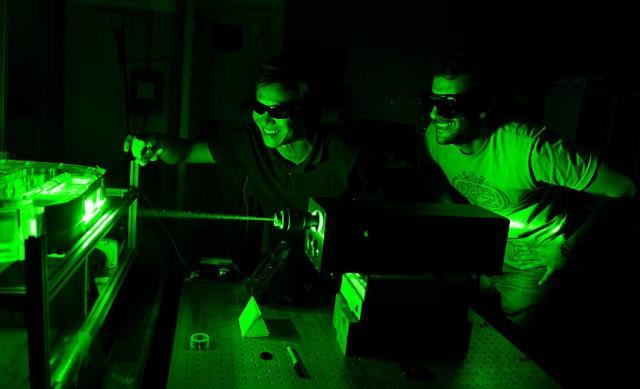 James Liao and Otar Akanyeti from UF's Whitney Laboratory use lasers to track the flow of water over a model of a fish. Learning about a fish's "sixth sense" could help scientists understand human systems such as those in the inner ear.

How do you find out what a fish feels?

For University of Florida researcher James Liao, the answer involves lasers, taxidermy and more than a few mathematicians.

In the late winter of 2013, Liao packed up his marine biological equipment from the UF's Whitney Laboratory in St. Augustine, Florida, to visit New York University's Courant Institute of Mathematics.

The trip was part of a 10-year journey that started when Liao was a graduate student at Harvard. Liao was intrigued by the arrangement of the lateral line organ, a “sixth sense” used by fishes to detect water flow and pressure, which remains consistent across more than 33,000 species. Why? Was this sensor organization related to function, or a developmental constraint that occurs commonly in biology? In order to answer this, Liao knew that he needed to directly measure what a fish feels when it is swimming.

That's where it got tricky.

"Putting sensors on a live fish makes it behave unnaturally," he said.

Liao, whose expertise is in biomechanics and neuroscience, brought together a team of mathematicians and roboticists (then-postdoc Leif Ristroph and professor Jun Zhang) to answer the question, which resulted in a recent paper published by Physical Review Letters. The work was featured in March’s New Yorker Magazine.

Liao, an aspiring professional angler, recreated the shape of a fish with the help of an accomplished taxidermist from Missouri. They created a model based on a fish for which his lab had collected extensive swimming data.

“This way we could drill holes into the model and place pressure sensors where the actual biological sensors would be on the lateral line,” he said, directly measuring what a fish feels for the first time.

To measure the flow of water, Liao uses transducers intended to detect subtle pressure changes in rat arteries and veins. The transducer proved to be ideally designed, but cost $1,000 each. Fortunately, Liao was able to secure several of them — along with amplifiers and analysis software — with grant support from the National Institutes of Health. It turns out that the Center for Hearing and Deafness Disorders is very interested in how hair cell systems, like the lateral line, can tell us more about human inner ear function.

But first, an impromptu art project, when the researchers realized that they needed to paint the fish models black in order for the laser system to highlight particles in the water as it flowed around the model.

Since his collaboration in the math lab, Liao's work with on lateral line continues to evolve, employing new technologies along the way. His lab now scans real trout and 3-D prints the shape, equipped with an even more accurate placement of lateral line holes. Liao is advancing a new line of research using a robotic controller, and, with colleagues at Harvard University, is investigating how the pressure signal across a fish's head changes while it is actively swimming.

“The fish at NYU didn’t wiggle, so while the PRL paper made great advances in understanding what fish feel when they glide, the reality is that fish move their bodies back and forth when they swim,” he said. Liao feels this new line of research, using robotics to ask better questions about biology, will allow him to ask — and answer — more questions that impact human health.