Immunizing schoolkids fights flu in others, too 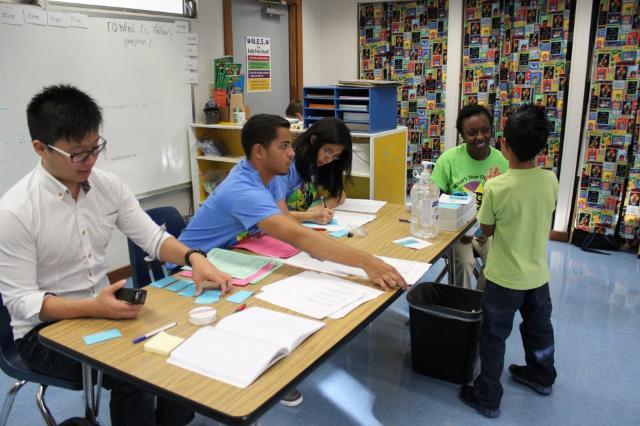 Nursing students, interns and volunteers helped to staff school-based immunizations, which resulted in indirect protection even for those who were not immunized.

Mathematical models predicted it, and now a University of Florida study confirms it: Immunizing school-aged children from flu can protect other segments of the population, as well.

When half of 5- to 17-year-old children in Alachua County were vaccinated through a school-based program, the entire age group’s flu rates decreased by 79 percent. Strikingly, the rate of influenza-like illness among 0-4 year olds went down 89 percent, despite the fact that this group was not included in the school-based vaccinations. Among all non-school-aged residents, rates of influenza-like illness decreased by 60 percent.

“The effect of school-based vaccination was profound, both on the students and on the community,” said Cuc Tran, a doctoral student in public health at UF and a lead author in the study, which was published today in the journal PLOS ONE.

The results can help communities decide how to effectively allocate funding, doses of flu vaccine and awareness campaigns to protect the most people, Tran said. Flu kills thousands of Americans each year, but even when it isn’t fatal, flu takes a toll: The Centers for Disease Control and Prevention estimate an annual cost of $10.4 billion in hospitalizations and outpatient visits related to flu.

With 38 million school days a year lost to flu, the UF study likely will catch the attention of school districts nationwide, said Nichole Bobo, director of nursing education for the National Association of School Nurses.

“Stakeholders in school districts see the connection between health and learning,” she said.

Add in the indirect protection, she said, and “you’re able to keep staff in school and parents at work.”

The study, which drew on expertise from UF’s College of Public Health and Health Professions, Emerging Pathogens Institute, Clinical Translational Science Institute, College of Medicine, College of Nursing, College of Liberal Arts and Sciences, College of Nursing and College of Pharmacy, is the first to show such pronounced indirect protection among the very young. While babies under 6 months old are susceptible to flu, they cannot be vaccinated. The same goes people with health conditions that prevent them from being immunized.

“It allows us to protect those who can’t otherwise be protected,” Tran said.

Beginning in 2006, a pilot program – initiated by UF in partnership with county schools, community organizations and the Florida Department of Health – provided free flu vaccines, delivered via a nasal spray, to public-school students. The study data came from the 2011-12 and 2012-13 influenza seasons.

There are a few reasons to focus flu prevention on schoolchildren: When they get flu, they get sick longer and shed more of the virus through their less-than-perfect hygiene habits, making them more likely to infect others. They also interact with more people each day than most adults do, providing more opportunity to spread flu.

The UF study shows that getting school-aged kids immunized can pay dividends throughout the community, said Dr. Parker Small Jr., a co-founder of the study and a professor emeritus in UF’s Emerging Pathogens Institute.

“Flu is the last pandemic killer of mankind,” Small said. “Just look at all of the energy devoted to thinking and planning about Ebola. If that same energy was put into flu, you could be saving thousands of lives and billions of dollars.”