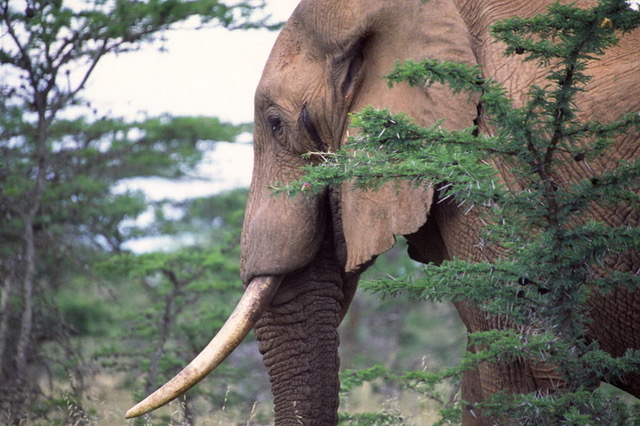 In the wide world of tropical flora, insects often take up the mantle of protecting the plants that shelter them, each mutually satisfied in a happy marriage of nature’s making. This is particularly true for acacia trees that tower over the African savanna. Their tiny protectors are carnivorous ants that dissuade animals from browsing on their thorny branches. Biologists and ecologists know this symbiotic relationship well, but until now no one realized that these ant-plant mutualisms could be strongly affected by temperature. In a study published May 16 in the journal Ecology, University of Florida researcher Ryan Tamashiro and biology professor Todd Palmer show that ant-protected plants are much more vulnerable to herbivores during the cool hours of early morning and evening.

“I only saw elephants feed from these acacia trees in the cold mornings," lead author Tamashiro said. "I thought it was interesting since elephants are eating machines, and these trees looked pretty tasty. I mentioned that the ant defense may be temperature dependent to Dr. Palmer, and from there we set out to see if it was true.”

The researchers conducted their study at the Mpala Research Centre in Kenya. They looked at four species of ants, Crematogaster mimosae, C. nigriceps, C. sjostedti and Tetraponera penzigi, living on acacia trees, which provide the ants with nectar and domatia, little living quarters within the acacia’s thorns. Although large animals such as elephants, zebra and giraffe feed on acacia, the researchers used Somali goats to simulate eating patterns from dawn to mid-day and focused on the most aggressive ant species, Crematogaster mimosae.

Palmer said, “We chose goats because they are widespread browsers throughout East Africa, and share feeding adaptations with native herbivores like steinbuck and kudu, such as narrow muzzles and high crowned teeth. And of course, goats are much easier to wrangle than a 200-pound kudu.”

The researchers set out to answer two questions: 1) How does the temperature of the acacia branches affect the activity of each ant species? 2) What are the consequences of variable activity in the most common ant species against a model browser throughout the day?

They looked at 15 trees for each ant species, measuring the number of ants that attack a glove disturbing the tree. They measured this behavior from sunrise to sunset. They found that the better defending species also had the biggest changes in activity over the day. From the lowest temperatures to the highest, the number of Crematogaster mimosae ants attacking the glove increased over five-fold.

In their second experiment, they used eight hungry goats that had the chance to feed from trees defended by ants and one with the ants removed. When introduced to the plants without ants, the animals chowed down fast throughout the day. However, when introduced to trees with ants, the goats’ behavior changed over the day. In the cold mornings, the goats fed as if the tree did not have ants, but took fewer bites as the branches – and their defending ants – began to warm up. The ants perform best during the warmer, daytime temperatures, discouraging the goats by biting near their eyes, nose, and mouth.

“It is a bit of a stretch to say a goat will respond to ants in the exact same way as a giraffe or elephant. Giraffes grab the branches with their long tongues and strip the leaves off branches. Elephants will do the same with their trunks but can destroy entire parts of the canopy,” said Tamashiro. “Still, there are natural browsers like the steinbuck that pick at individual leaves like the goats.”

“Employing ants is a great defensive strategy for a plant, since ants can attack enemies both large and small,” said Palmer. “But our study points out a really important caveat, since the activity of ants is tied to environmental temperature. So when it’s cold out, these plants are basically sitting ducks for herbivores, which is a pretty significant cost for this plant defense strategy.”