Ellas B. McDaniel (Bo Diddley) Collection at UF honors legacy of “The Originator”

Florida and African-American history collections at the University of Florida have taken a major step forward with the new Ellas B. McDaniel (Bo Diddley) Collection, which will be available to scholars, students, and the public. Bo Diddley is widely considered one of the founders of rock and roll who shaped the evolution of that new form of American music.

The Ellas B. McDaniel Collection holds an array of items reflecting the musical genius, public performance and accomplishments of McDaniel, who lived the latter portion of his life in Archer, Fla., near the UF campus. His extended family continues to live in the Archer area. The collection, established by the George A. Smathers Libraries in collaboration with the Ellas B. McDaniel Irrevocable Trust, ensures the preservation of and access to historical materials of international significance that have particular importance to Floridians.

Bo Diddley brought rhythm and blues elements into the new genre and articulated musical elements that became enduring influences on rock, hip hop and popular music. His historical significance extends into numerous other areas, and the collection will open avenues for better understanding technical and performance innovation, international influences in American music, and race and gender in the entertainment industry.

The Ellas B. McDaniel (Bo Diddley) Collection will support teaching and research about his many contributions to American music, while ensuring that a substantial collection of materials can be made accessible locally and through national outreach. The George A. Smathers Libraries acquired musical instruments, stage costumes, posters, photographs, documents, and memorabilia from the Ellas B. McDaniel Irrevocable Trust, ensuring that the largest institutional holding of historical materials about Bo Diddley remains close to where he lived the latter portion of his life. A partnership with the Samuel Proctor Oral History Program at UF will enable the Libraries to begin collecting oral histories in the near future, with curators placing a priority on documenting memories of Bo Diddley from his family, fellow musicians, and the Gainesville community.

The archival collection will be stewarded by the Special Collections and Area Studies Department of the George A. Smathers Libraries with assistance from library specialists. Library experts in Florida history, music, African American studies, and popular culture are working with conservators of rare materials and an exhibitions team to ensure preservation and public display of materials in Gainesville and across the United States. The collection is now open to scholars, students, and the public conducting research in Smathers Library, and the exhibition “Bo Diddley: An American Original” will be on display through June 30 (see sidebar).

The collection preserves and documents evidence of the innovation, creativity, achievement and enduring impact of his work. McDaniel’s syncopated beats and powerful stage presence inspired numerous other musicians to incorporate the Bo Diddley Beat and his mannerisms into their own performances. He experimented with guitar design and amplification technologies, directly shaping the popularity of commercial guitar models and achieving new acoustic effects during live stage performances. His technical innovations added to his influence.

Known as Bo Diddley since his early days as a musician, he was born in Mississippi in 1928. He began his musical career in Chicago, lived in Washington, D.C., and resided in New Mexico and Florida, before passing away in 2008 in Archer, Florida. His extended family and a network of fellow musicians, fans, and local supporters continue to live in the greater Gainesville area. Placement of the materials at UF ensures regular public display of an array of historical materials, a high quality preservation environment, secure use of the collection and an institutional commitment to the continued promotion of his musical legacy near a community tied closely to McDaniel, as well as to national audiences. 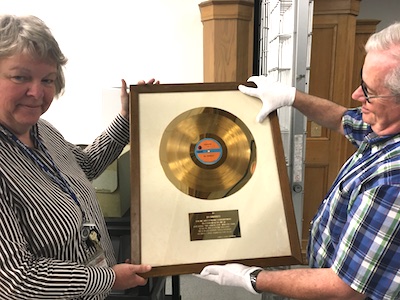 Items from the newly acquired collection are on display in the exhibit “Bo Diddley: An American Original” on the second floor of Smathers Library (East). Bo Diddley’s signature rectangular guitar and Lifetime Achievement Award from the National Academy of Recording Arts and Sciences are on view, alongside photos, posters, fan gifts, and press kit materials from the Ellas Otha Bates McDaniel (Bo Diddley) Collection.

Musician and author Marty Jourard will give a free public talk about Bo Diddley April 9 at 2 p.m. in Room 100 of Smathers Library. Jourard played keyboard and sax for The Motels from 1979 to 1986 and rejoined the band in 2012. He is the author of "Music Everywhere: The Rock and Roll Roots of a Southern Town," the definitive history of music in Gainesville.

The exhibit is open Mondays-Thursdays 9 am-6 pm and Fridays 9 am-5 pm through June 30.

Curators and conservators at the Smathers Libraries identified materials held by the Trust that could be preserved, studied, and exhibited, carefully reviewing and storing materials in boxes and containers designed to ensure long-term preservation of items. While guitars may remain in their original cases at present, conservators separated clothing with tissue paper in boxes made with acid-free paper. Posters are being treated to make them more flexible, with humidifiers adding the right amount of moisture to allow them to be flattened rather than rolled up. Each of the boxes and items selected for the collection undergoes a series of evaluations and treatments before being made available to researchers or for exhibitions.

Archival staff are working to create descriptions of and to arrange artifacts and paper documents so that they can become accessible to researchers. The descriptions will become part of a finding aid placed online so that those wishing to see the collection can ask for specific materials of interest. Many items cannot be digitized due to copyright issues, but the staff will work to ensure maximum access to images through the UF Digital Collections, which currently offers public access to more than 14 million digital images for free.

A continuing relationship with the Ellas B. McDaniel Irrevocable Trust will enable UF to further enrich exhibitions and programs. With the Samuel Proctor Oral History Program at UF, the Libraries intend to create, preserve, and make available oral histories focusing on Bo Diddley, whom the university awarded an honorary posthumous doctorate of fine arts in 2008. The City of Gainesville renamed the outdoor concert venue in its historic downtown the Bo Diddley Community Plaza that same year, honoring his legacy.

McDaniel’s body of work performing as Bo Diddley created a bridge between the genres of rhythm and blues and rock and roll, plucking elements from a variety of musical traditions and transforming them into a signature style. Performers from Elvis Presley to today’s hip hop and pop artists adopted and adapted that style for their own music. Throughout a career from the mid twentieth century to the early twenty-first century, his genius earned him the nickname “The Originator” because of how frequently fellow musicians integrated his innovations into their own styles and performances.

Bo Diddley’s ability to ingenuity in rhythm, songwriting, performing techniques and band composition challenged and intrigued critics and audiences. He simplified chords dramatically to focus on powerful rhythms. He pared down harmonic structures, emphatically employing a two-bar syncopation from a rhythm of African origin. Bo Diddley experimented with and refined tremolo effects early in his career, and a rectangular guitar produced to his specifications by Gretsch became his signature instrument.

He also broke barriers by prominently featuring female guitarists in his band, unlike any other major male rhythm and blues artist of his day. He struggled to achieve financial success in equal measure to his influence and the popularity of his music. Like too many African American musicians of the twentieth century, early management contracts positioned him unequally in terms of profiting from his own achievements. Elvis Presley and other artists incorporated elements of Bo Diddley’s muscular stage movements into their own performances, and others picked up his signature beat.

In 1987, he was inducted into the Rock and Roll Hall of Fame, with a Nike commercial a few years afterward highlighting his ongoing name recognition in popular culture. He continued performing until late in life, earning a Grammy nomination and a Lifetime Achievement Award from the National Academy of Recording Arts and Sciences in the late 1990s, among other awards.