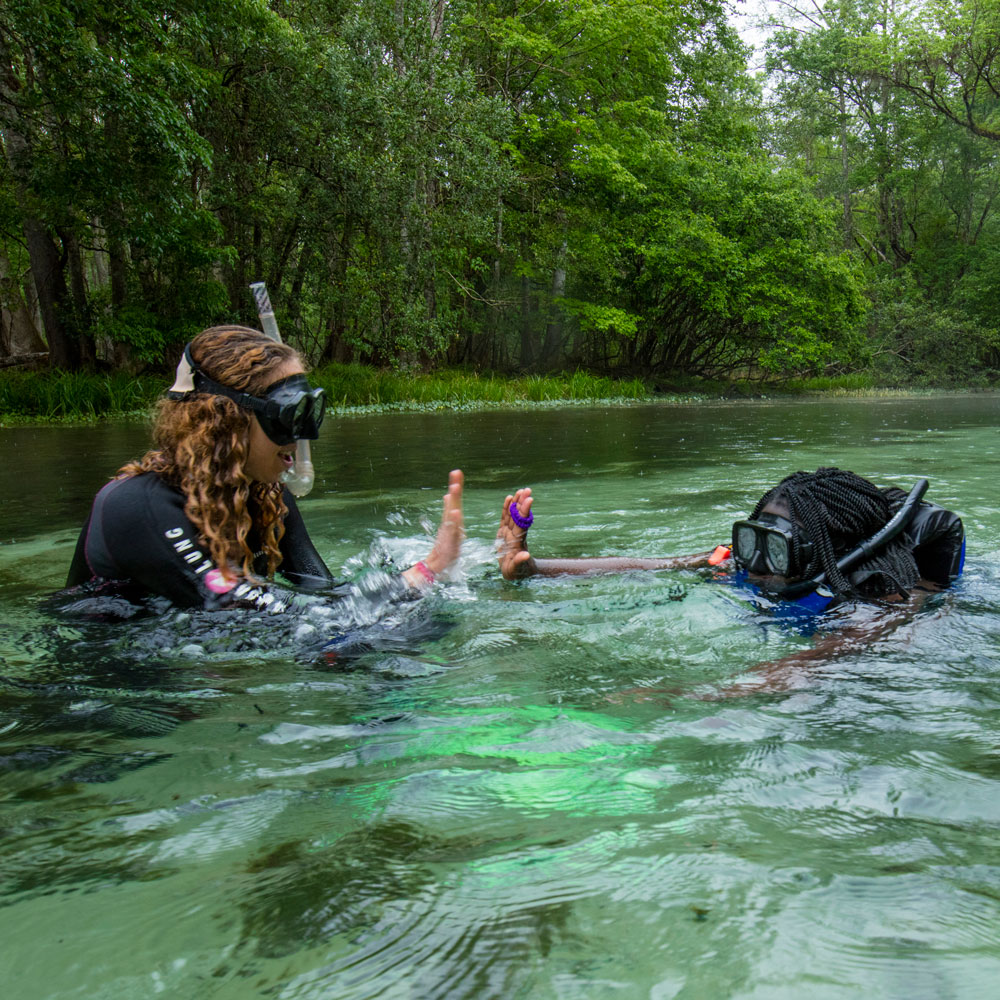 Jenny Adler’s journey through graduate school has closely resembled the winding limestone caves of the Floridan Aquifer that she photographs from the inside out.

Adler is a doctoral student in the School of Natural Resources and Environment, and her dissertation research straddles the nexus of the science, education and communication of conserving Florida’s springs—a path that took time to define and develop because of its innovative and interdisciplinary nature.

Adler first came to Florida in 2011 to pursue a job with United States Geological Survey tagging sturgeon for a research project on the Suwannee River. It was the combination of heat and sturgeon slime that made her first experiences of jumping into the Florida springs after fieldwork so sweet.

“On the weekends, I started to get really into snorkeling and diving in the springs because I was just completely fascinated by them,” she said. “I had never been in a place with water that clear before.”

She made it her goal to swim in every first magnitude spring—defined as springs that discharge water at a rate of more than 65 million gallons per day—in Florida. She started photographing the crystal clear waters of the springs as a way to share their beauty with her family back home in Massachusetts.

Two years after arriving in Gainesville, Adler began her graduate career at UF. Her first research proposals focused on how dissolved oxygen affected snail grazing. She spent her time parsing out the science and reading as many scientific studies on the springs as she could get her hands on.

“I kind of convinced myself that I wanted to study snails,” she said. “I don’t regret doing that because having that scientific background is really helpful—essential, in fact.”

Through understanding the science as well as the disconnect between what scientists have discovered and what the public understands, Adler couldn’t justify devoting years of study to a single organism after she realized that she could personally address the issue of communicating springs science to the public.

The issue that Adler discovered was multifaceted. First, the way scientists discussed the springs and the way the springs were covered in newspapers frequently were not aligned, and second, the overwhelming message she found in newspaper coverage was that any issues with springs conservation were primarily framed as a government problem.

“If we are going to change how we use water in Florida, we really need to look more at changing our water ethic and helping people understand the problem," she said. 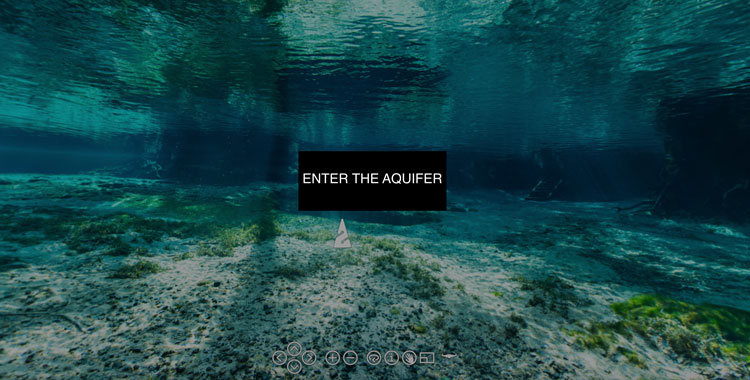 Adler’s virtual tour of Ginnie Springs allows people to see inside of the caves of the Floridan aquifer from their computer. Click photo for tour.

Eventually, Adler developed a proposal for a completely new project that she calls “Visual Ecology.” The crux of her work looks at how photography can be used as a tool to educate students about springs conservation. She examines both the natural science and the way the science has been communicated to the public, and she has designed her own environmental education program called “Walking on Water” for students in Gainesville schools.

In 2016, Adler was awarded a National Geographic Young Explorer’s grant, which has helped to fund the development of a 360 tour of the springs that Adler uses to introduce the springs to students before taking them on a field trip to experience it for themselves.

“Basically, I’m going to bring that around to schools to show the kids about the aquifer and what it is, and then I’ll also take them on field trips to the springs to do photography themselves,” she said. “Because in my experience photography changed the way that I looked at the springs and looked at the natural world.” 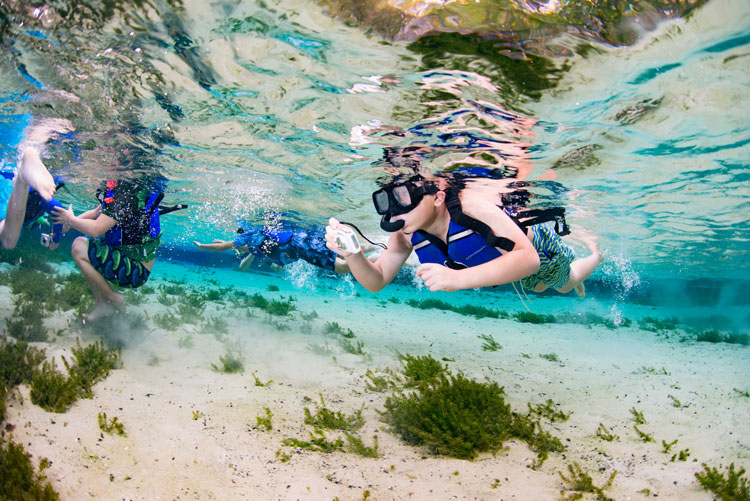 Luisa Arnedo, the program officer for Adler’s grant from National Geographic, said the magazine has supported many projects in Florida before, including two documentaries on the Florida Wildlife Corridor, but Adler’s project is one of the first to focus specifically on the Florida springs.

“Jenny's project is a beautiful combination of conservation, photography and education,” Arnedo said. “Our grants committee was impressed with Jenny's well thought-out project as well as her scientific credentials. We looked at her past work and had felt that she had a great chance of being successful with this project.”

Adler’s experience in both science and communication gives her a unique vantage point from which to develop her project. As the first SNRE doctoral student to focus on environmental communication, she made connections with researchers and professionals around the region to help piece the project together.

“It really was kind of taking a lot of classes and meeting a lot of people who did different things and then understanding how you can combine them into something that would make sense,” she said. “So it really is a science, but then taking a new approach to education and journalism research.” 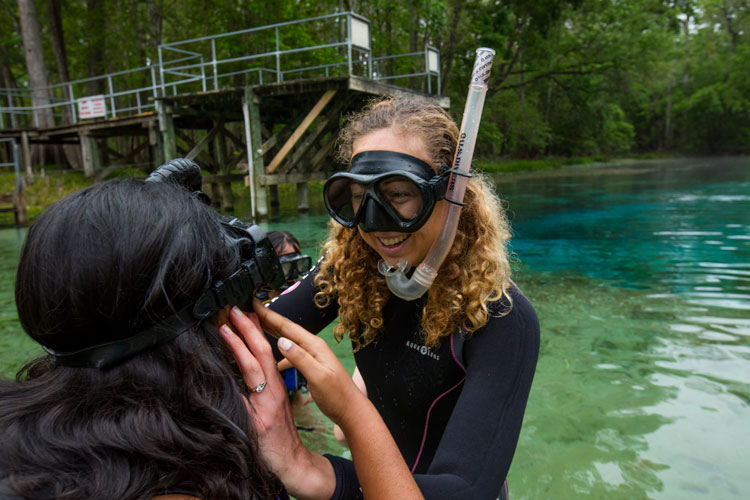 Adler helps fit a snorkeling mask on a student at Blue Springs.

As she has developed her project and refined her focus, Adler says people have contacted her asking how they can do what she does. She admits she is still trying to figure it out as she goes. But through trial and error, Adler has developed a clear vision of what she hopes to accomplish by combining photography, conservation and environmental education with her “Walking on Water” project. Her aim is to provide the tools that empower others to feel as passionate as she does about the springs.

“It’s not just communicating with people, it’s letting them experience something and wanting to care about it and wanting to protect it,” she said. “If we raise a generation that has this new perspective, then we won’t need to bombard them with information about climate change or saving water, because they have been raised that way, and they will understand why it’s important.”