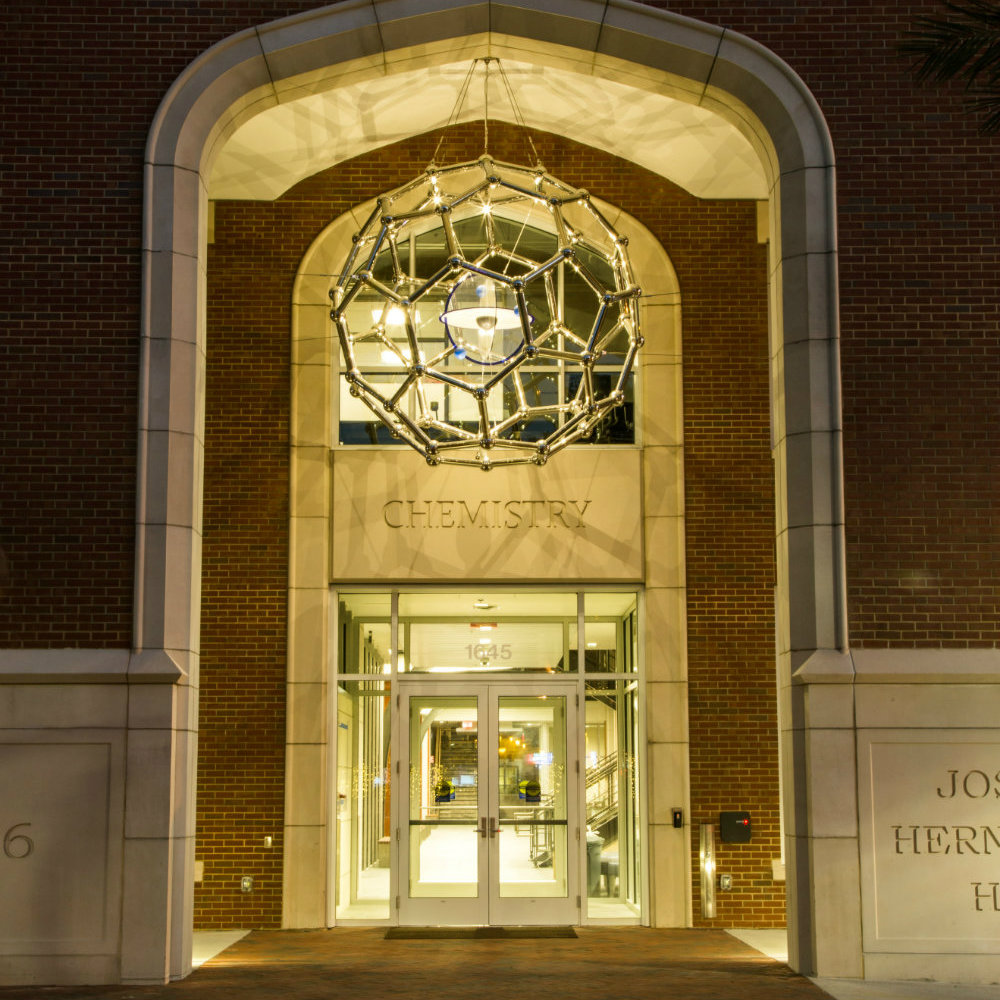 The first time former UF President Bernie Machen visited the chemistry labs on campus, he was shocked. He himself had been a chemistry major at Vanderbilt in the 1960s and didn’t see much of a difference between those mid-20th century spaces he used as an undergraduate and those he was viewing in the 21st century in Leigh Hall.

“Chemistry has a huge presence on this campus,” Machen said. “We have a big, diverse graduate program that is punching all the right buttons. Chemistry is one of our star departments, and they were suffering from poor resources to deliver their mission.”

He made it his mission to upgrade the facilities. In 2009, architectural plans for a new building were drawn, and underground utilities infrastructure had been laid. “The problem was,” Machen said, “we were in this darned recession. Construction was shutting down everywhere.” Indeed, construction on the chemistry building halted in 2010, but resumed in 2014, with the official groundbreaking for the new building taking place October 10, 2014, just two months before Machen retired. 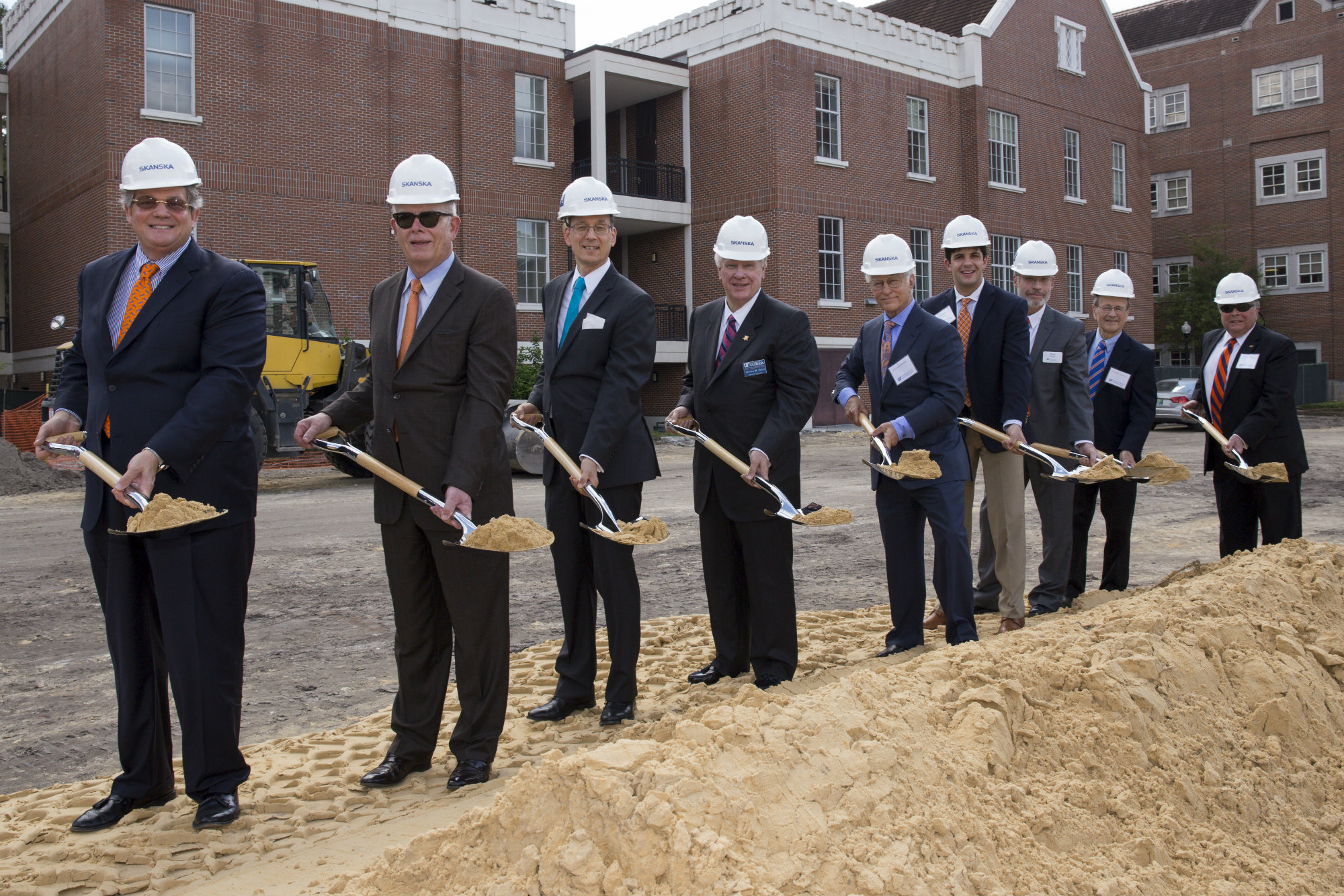 Less than three years later, the striking new chemistry/chemical biology building sits on the corner of Buckman Drive and University Avenue as if it always should have been there. Named Joseph Hernandez Hall, after a generous donor and UF alum, the building's dedication took place on Friday, April 21.

“Chemistry is a symbol for what a 21st-century land-grant university should be. Even on our own campus, people don’t realize what a good chemistry department we have. This is a celebration, not just of a building but of a department, not just for what we’ve done, but for what we’re going to do,” Machen said.

Dave Richardson, dean of the College of Liberal Arts and Sciences and former chair of the chemistry department, has called the building “magnificent” and “marvelous.”

“Thousands of students will pass through these doors annually,” said Richardson during the dedication on Friday. “They will receive a laboratory experience that is second-to-none in higher education. The modern laboratories make it easy to introduce technology and cutting edge techniques into truly experiential learning. In an age when many parts of education are enhanced by online learning, often anywhere-anytime, we believe that one of the hallmarks of a great university experience happens in the hands-on lesson of teaching labs.”

Covering 111,552 square feet, the building consists of six levels, with four being used for teaching and research, and has the capacity to support 650 people at any one time (the entire fifth floor is storage and mechanical space). The first floor holds undergraduate general chemistry labs that can house 250 students, and it is these labs that will have the greatest use. Because general chemistry and organic chemistry are required courses for a large number of majors across the university, 8,000 undergraduates a year, including more than half of the freshman class, will use the new facilities. Currently, Leigh Hall’s general chemistry labs are bursting at the seams with labs scheduled five days a week, from morning until night, and this has been the case for the last decade. 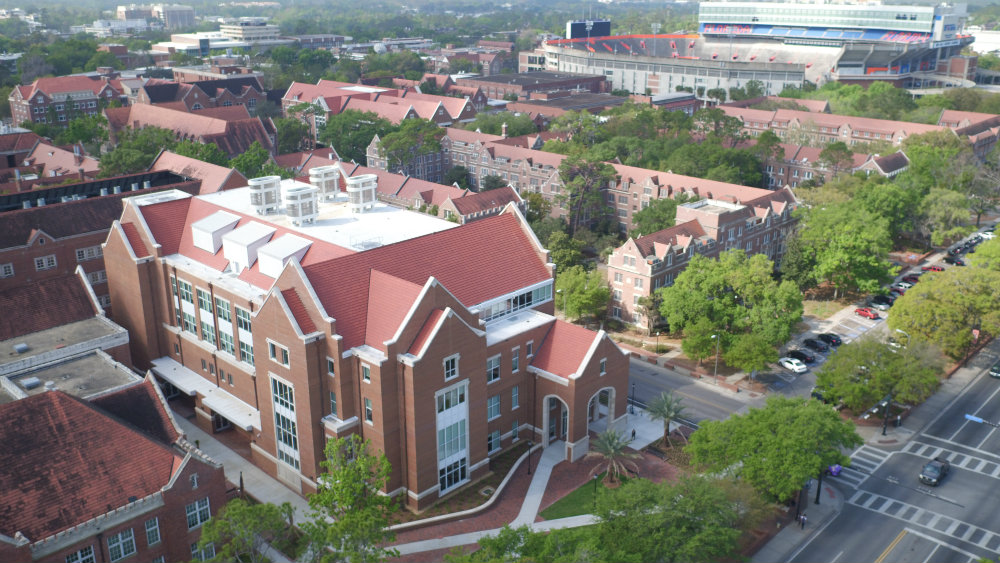 Bill Dolbier, professor and chair of the chemistry department, says the new labs “will give students a tremendously favorable impression of the campus. Right now, we don’t show them the undergraduate general chemistry and organic chemistry labs and just hope they don’t notice them. The new labs are going to blow them away.”

Senior project manager Frank Javaheri, who’s been working on the building since it was first discussed, is a numbers man. He will tell you that 6,777 yards of concrete have been poured into the new construction. “That’s enough to build a four-foot sidewalk from the building to Micanopy and back,” he says. (Micanopy is roughly 13 miles from campus.) Structural and non-structural metals? 165.25 tons. Number of bricks? 380,000. Vinyl tiles? 42,480. Javaheri is particularly proud of the fact that LED lighting has been used throughout the building, and he anticipates LEED Gold (Leadership in Energy and Environmental Design) for building certification conferred by the US Green Building Council.

The new space is student-centered, with few administrative offices, and even the chemistry chair will not have an office there. Undergraduate organic chemistry will have its home on the second floor with room for 120 students. Dolbier points out that the new facilities allow for a new curriculum, being developed by the new undergraduate director of general chemistry, Melanie Viege. Together, she and Davidson will implement the new curriculum for the general chemistry and organic chemistry laboratories.

With four buildings devoted to chemistry — in addition to the new building, Leigh Hall, and Sisler Hall, there is the Chemistry Laboratory Building — Dolbier says the department is committed to fostering creativity and innovation across all of its programs. “We intend to create an undergraduate program that others will want to emulate. We will be national leaders,” Dolbier said.

UF Chemistry’s graduate programs also will get quite a boost with the new building. The third and fourth floors are dedicated to graduate research. The third floor is specifically designed for research in the area of chemical biology, and the fourth floor contains labs for research in synthetic organic chemistry, along with separate conference rooms. Dolbier notes that recent UF hiring initiatives have specifically contributed to two areas in chemistry: smart polymer nanomedicine and chemical innovations in cancer research.

Aaron Aponick, associate professor of chemistry, has been at UF since 2006, and has been involved with the discussion of the new chemistry building since the very beginning. Aponick is a synthetic organic chemist, and his research group will occupy labs on the fourth floor. He, like other researchers in the building, will reap the rewards of having modern, pristine research space; however, the benefit exceeds sheer functionality, he says.

“There’s a lot to be said for students from different research groups interacting and intermingling,” Aponick said. “At the graduate level, having a cadre of people exchanging ideas is invaluable. You’re no longer compartmentalized. At this point in your education, the more you see and think about, the better your education. You broaden your knowledge base.”

Ashley Erb is an undergraduate research and teaching assistant in Aponick’s group who has been admitted into UF’s graduate chemistry program. She says she loves the history of the older buildings — Leigh Hall was built in 1926 and Sisler Hall in 1966 — but is excited about the opportunities that the new building will provide for both teaching and research.

“The new equipment in the teaching labs is way more advanced,” she said. “Although, one of the greatest impacts is going to be on undergraduates who’ve had a hard time getting into a research lab. You don’t know how to do research until you actually get into the lab and do it. Clearly, this opens new avenues for UF Chemistry.” 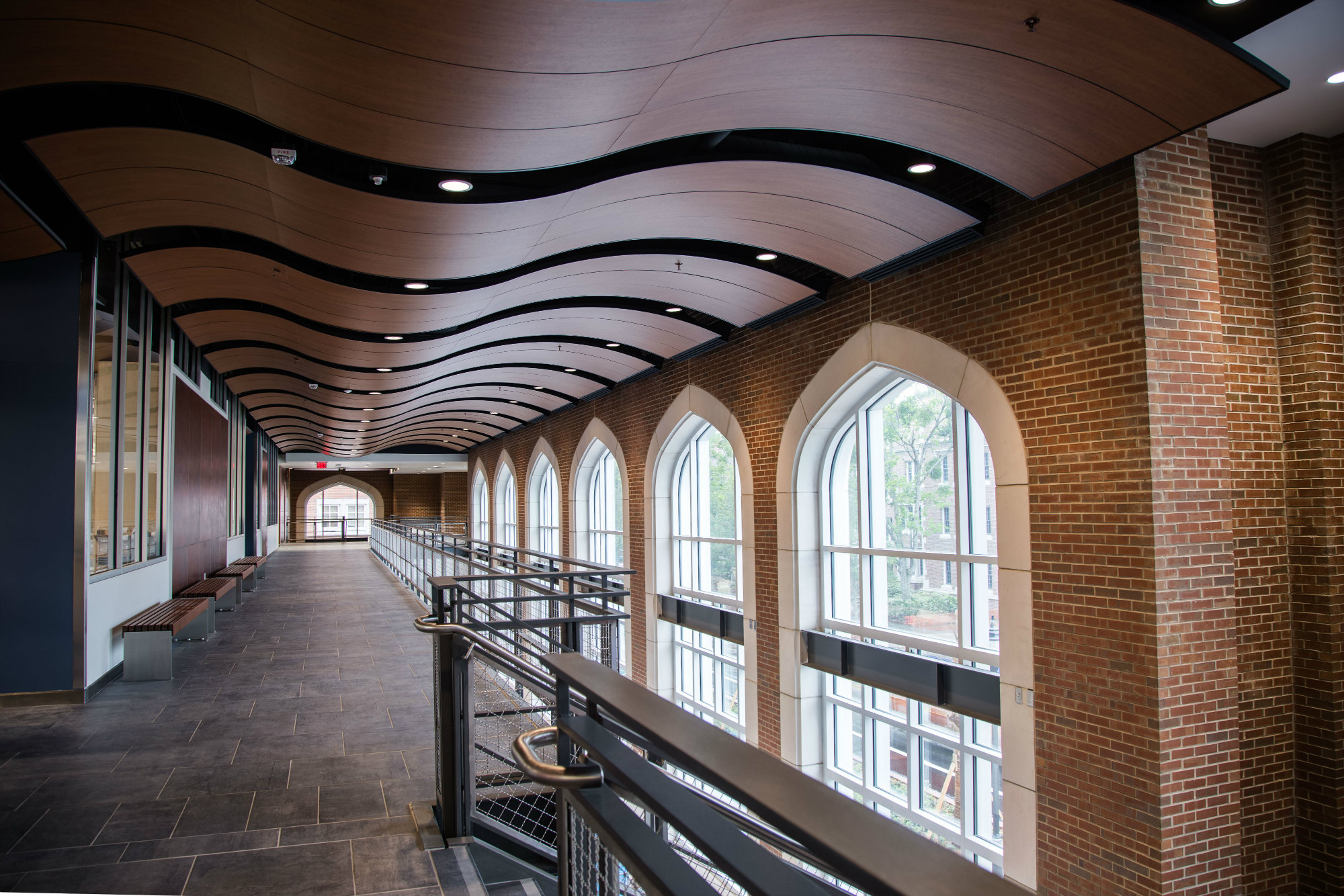 A number of generous donors contributed to the building, including a huge gift that has momentum-building benefits coming from Joseph Hernandez, who gave a $10 million endowment, Dolbier said.

Joseph Hernandez Hall is named in honor of him and the endowment that will benefit this generation and beyond.

“In terms of the impact of the endowment on the department of chemistry, these are rare and exceptional opportunities that only a few programs get to have, where their future can be improved and enhanced through a gift that can keep giving to the students, to the research, and to the scholarly enterprise of the department,” says Dean Richardson. “When the world demands a new kind of technology, a new chemistry, a new approach to solving problems, chemistry will be ready to invest and move forward. This is what the income from the endowment can bring.”

As a UF student in the late 90s, Joe Hernandez knew early on that he wanted to be a medical scientist. His passion and curiosity was recognized, encouraged and nurtured at UF, he said. For the last 20 years, Hernandez has worked in the pharmaceutical and biotech world, creating a number of startups.

“I’ve been inspired to give to UF. There’s an absolute link between chemistry and its importance to my work,” Hernandez said. “The flexibility to jump from chemistry to neuroanatomy in attaining knowledge was very attractive to me. I don’t like rigidity. My endeavors were well suited for the liberal arts and sciences.”

“It will also enable faculty to be more effective educators while achieving even greater excellence in research,” he said.

See the full story in the spring 2017 issue of Ytori, produced by the College of Liberal Arts and Sciences.