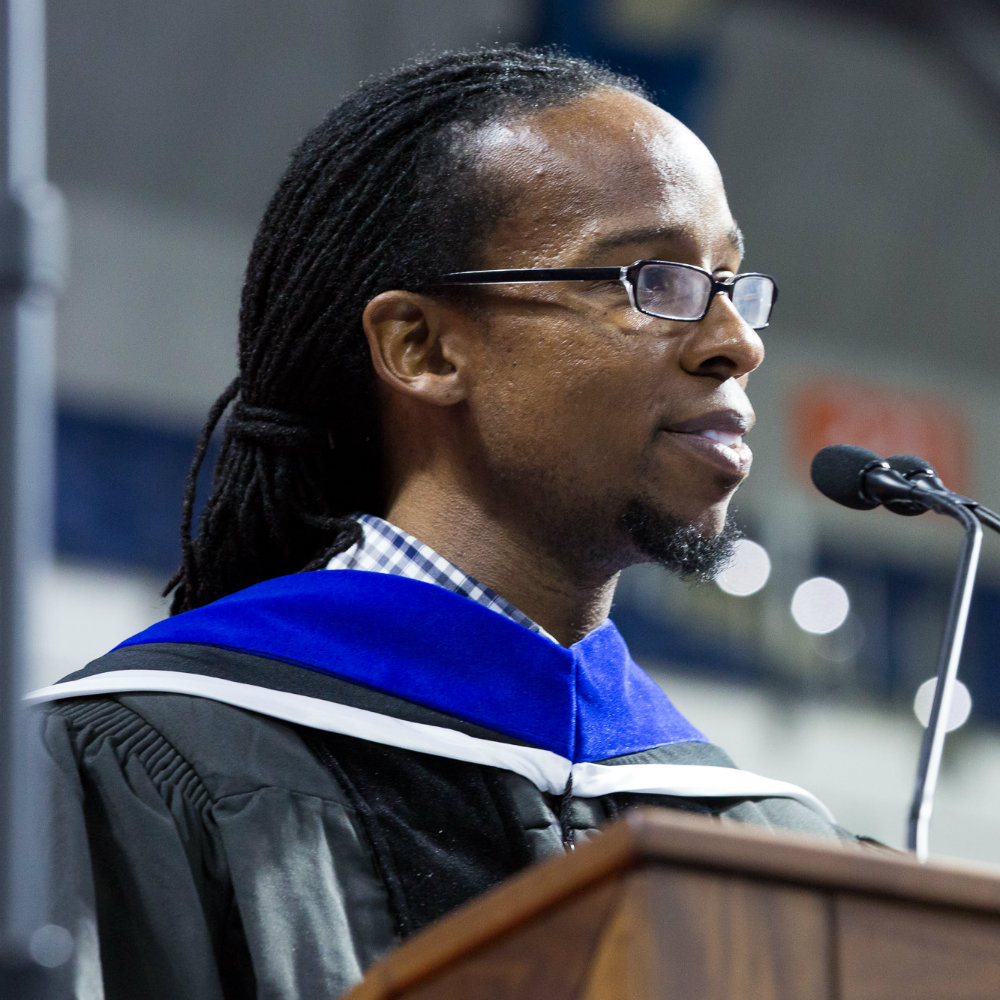 Ibram X. Kendi is an assistant professor of African American History, with a particular emphasis on racist and antiracist ideas and movements. In November, Kendi won the National Book Award for his second book, Stamped from the Beginning: The Definitive History of Racist Ideas in America, which has been praised nationwide for turning our ideas about racism upside-down. His speech is below.

“Are you an intellectual?” by Ibram X. Kendi

What an honor it is to stand before you! I would like to thank President Fuchs for inviting me to speak.

I even spoke in Anchorage, Alaska two weeks ago. Yes, I am still defrosting. So if you see water coming out of my pores during this speech—it’s not sweat, it’s ice melting.

In all seriousness, Anchorage is a beautiful city surrounded by mountains that seem to always be kissing the beautiful blue sky. From the city center, you can see the highest mountain peak in North America, a mountain the natives call Denali. You may know it is as Mount McKinley.

So I would like to greet all those courageous climbers who trekked up the mountain that is the doctoral process.  I am so happy to be standing here at this mountaintop with you and your families and your friends and your doctoral advisers who pushed you and pulled you along the way.

As you stand at this peak about to receive this prestigious doctoral degree from the University of Florida, I suspect you are not only celebrating, but you are also thinking about what is next.

Do not become that person.

When I say intellectual, I am not referring to someone who knows a wealth of information. All of you, I am sure know a lot. You know a lot about your discipline and your field and your research—otherwise you would not be here waiting for me to finish this speech so you can get your degree already and go to dinner. I’ve learned the hard way that standing in the way of students and their degrees is unwise; and standing in the way of American families and their food is really unwise. But please bear with me.

Are you an intellectual?

Throughout this nation’s history, Americans have dove into the false waters of racist ideas because we do not want to face the reality of racial discrimination. We have not bred intellectuals because only intellectuals are willing to always face reality. Only intellectuals pledge to look for and say the truth and nothing but the truth.

Racist ideas have suspended reality, drenched us in lies, subjectified standards, misled millions by faulty statistics, and forcibly herded generations of unsuspecting Americans into legal ignorance and lethal hate. We now live in a society where comfort matters more than certainty, where tradition matters more than truth, where labels matter more than logic.

We are here at the mountaintop of the doctoral process. So I ask again what is next for your mind? Will you continue the never-ending climb that is being an intellectual? Or will you start making your way down the mountain towards the valley of anti-intellectualism, thinking you know it all, thinking you have the world figured out, thinking you are beyond critique.

But know that the academic current will engulf you. Your work will not be remembered. You will not make history.

I want you to make history, not be history. I want your work to be remembered, not be forgotten. I want you to power and steer the academic current, not be engulfed by it.

But in order to break new grounds, we must break from our old grounds. In order to change the world we must critique the world.