Staying safe in a thunderstorm

Ending up in Florida might have been fate for Corene Matyas. Childhood experiences with severe weather drew them to learn about hurricanes, tornadoes and floods. Now a professor of geography at the University of Florida, Matyas studies the rainfall patterns of hurricanes and other tropical cyclones, including those that hit the state.

And like everyone in Florida, Matyas is treated to almost-daily thunderstorms, which have earned the state the nickname “lightning capital of the U.S.”

How does lightning form? How can you stay safe? And does Florida really have more thunderstorms than other states? Matyas explains. 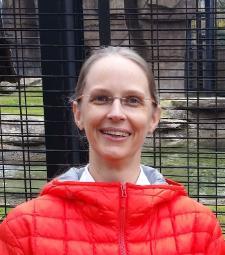 “Once you have enough energy built up, it’s going to need to be released,” Matyas said.

Lightning is the release of this pent-up energy. But first, lightning must find a path between negative and positive charges. It finds this path by sending out “leaders,” exploratory chunks of charge that try to find the opposite charge to connect with. There’s a degree of randomness, but these leaders are more likely to connect with tall, electrically conductive objects as they head toward the ground. Lightning can also form within a cloud or between two different clouds.

When negative and positive charges connect, a huge current rapidly flows between the cloud and the earth.

“When a charge is released, it creates light and thunder because the air heats up instantly to a temperature hotter than the sun,” Matyas said.

That thunder also becomes a useful tool. Because sound travels slower than light, thunder takes longer to reach you than the lightning flash does. By counting the time between a lightning flash and its crack of thunder, you can tell how far away the lightning is. Every five seconds equals about one mile.

Although there are different guidelines for how far away is safe, the safest rule is to assume that hearing any thunder means you are close enough to get struck by lightning.

Matyas says that a lot of the popular beliefs around lightning safety are misconceptions that could get you hurt.

Myth: Sheltering under a tree protects you from lightning.

Fact: “If you're right next to a tree, that tree might be the tallest thing in the area. So it's the easiest connection for lightning to make. And then it can travel through the ground and then up into your feet,” Matyas said.

Myth: Crouching or lying down reduces your chances of being struck by lightning.

Fact: The National Weather Service recommends that anyone caught outside make their way as quickly as possible to a building or enclosed car.

Myth: Lightning can only strike you if a thunderstorm is above you.

Fact: “Because lightning can go out in many directions, the storm doesn’t always have to be over you for you to get hit by lightning. It can go sideways, and it can actually travel sideways for miles,” Matyas said.

Myth: Lightning is only a concern when the forecast calls for a “severe thunderstorm.”

Fact: The NWS defines severe thunderstorms by dangerous winds or large hail. “None of those definitions consider lightning,” Matyas said. Lightning can form regardless of the wind speed or nearby rainfall.

The safest thing to do — by far — if you see lightning or hear thunder is to move indoors. The National Weather Service recommends waiting for 30 minutes after the last lightning flash or thunderclap before going back outdoors.

Fully enclosed cars (sorry, no convertibles!) are a safe option on the road. Contrary to popular belief, it’s not the rubber tires that protect you, but the metal exterior. “The metal is a very good conductor, so that is the path of least resistance. The energy is going to travel around the frame and then dissipate out to the ground. Just don’t touch the metal,” Matyas said.

If you are caught outside, it’s best to avoid tall objects, which are more likely to be struck by lightning.

“You want to stay away from isolated, tall objects and you don’t want to hold up a golf club or a stand near flagpole,” Matyas said. “You also don’t want to be standing in a river or a pond or the ocean when a thunderstorm is coming because water is a good conductor.”

Florida is often called the “lightning capital of the U.S.” Although the title isn’t official, Florida does see a large number of thunderstorms and more people die from lightning strikes in Florida than in any other state. Florida’s large population also contributes to the sizable number of fatal lightning strikes in the state, according to the National Weather Service.

The frequency of storms comes down to Florida’s unique geography, jutting out between the Gulf of Mexico and the Atlantic Ocean, said Matyas. The temperature difference between the water and the land pushes breezes inland during the day, which brings in moisture over the sun-warmed land.

“As the land heats up, it makes the air a little bit more unstable than the air around it. So you get a parcel of air starting to rise and then air moves in under that warm parcel from over the water,” Matyas said.

“Those are some of the ingredients you need to make a thunderstorm and that process can happen on an almost daily basis,” she said.