Smartphone apps to track blood alcohol abound, but until now had little evidence to show they help manage drinking in young adults. A new University of Florida study shows that heavy drinkers age 21-25 who weren’t trying to cut back on alcohol reduced their drinking by four and a half drinks per week while using the apps — nearly one drink less on each day they imbibed.

“This shows that college-age drinkers are open to ways to reduce their drinking,” said the study’s lead author, Robert Leeman, Ph.D., a professor in the University of Florida College of Health and Human Performance. “It just has to be something that fits their world, that’s easy to use and that they can do discreetly.”

Heavy drinking in this age group is common, with 23% meeting the criteria for alcohol use disorder compared to 14% of older adults. But despite potential impacts on their health and safety, those in their early 20s may feel little motivation to change their habits, making them difficult to reach with interventions, Leeman said.

“Their life is set up to facilitate drinking in a lot of ways, but that doesn't mean that they won't reduce their drinking,” he said.

In the study, published in the journal Psychology of Addictive Behaviors, participants tested three smartphone-based interventions: a Bluetooth breathalyzer paired with an app to measure blood alcohol, an app that estimates blood alcohol based on input from the user, or, in the control condition, sent a text to themselves each time they had a drink. Each had previously self-reported four or more heavy drinking days per month (four or more drinks for women, five or more for men), with at least one day with an estimated BAC of .1 % or higher and drinking at least 10 of the past 30 days.

The researchers, which included UF psychiatry professor Sara Jo Nixon and colleagues from Yale School of Medicine, Brown University, University of Washington, Boston University, University of Missouri and University of Alabama, first acquainted participants with the apps in a purpose-built lab tucked underneath UF’s football stadium. Launched in 2016, the EDGE (Ethanol, Drug & Gambling Experimental) Lab has all the trappings of a drinking establishment: a wooden bar with beer taps and paper coasters, liquor bottles and pint glasses lining the shelves. Only a handful of similar labs exist nationwide, Leeman says, and getting it off the ground wasn’t easy, given that Ben Hill Griffin Stadium didn’t allow alcohol sales in the stadium at the time. 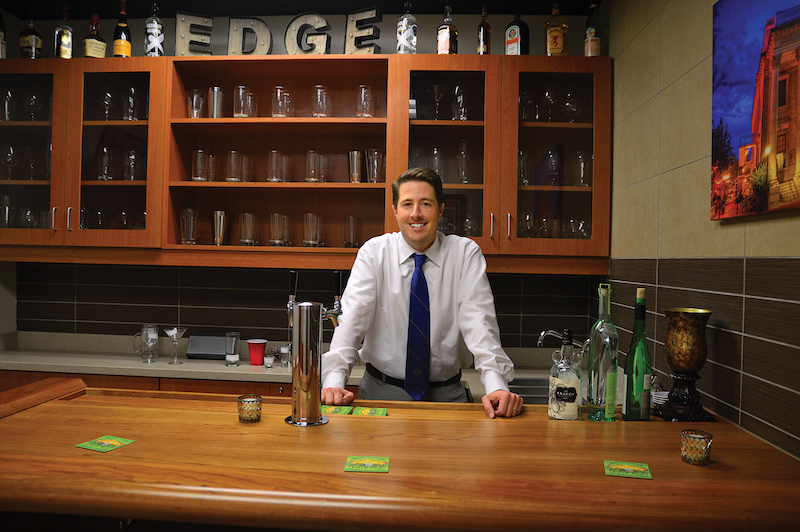 During studies, the lights are lowered, music blares and a muted television mimics sports-bar ambiance. The researchers even spray alcohol into the air and wipe it on surfaces for an authentically boozy smell.

“We have everything but the sticky floors,” Leeman said. “We know those cues can really drive alcohol consumption.”

In the study, which was done before the pandemic, participants ages 21-25 chatted and drank beer at their own pace in the bar lab while recording their intake using the technology assigned to them. Research assistants monitored the group and poured drinks. Leeman supervises but stays out of sight during the sessions to preserve the vibe. (“I’m older, I’m a faculty member. I’m a human buzzkill at this point.”)

After the lab sessions, 99 participants about evenly split between male and female, students and non-students, were instructed to use any of the three methods to track their drinking over the next two weeks. Although they were only compensated for using the technology three times, the participants averaged almost nine uses in the following two weeks, with most alternating between the breathalyzer and the estimator.

Leeman says it’s encouraging to see that heavy drinkers who weren’t trying to reduce their consumption wound up drinking less while using the apps. His analysis also shows app use may be linked to fewer consequences from drinking, which can range from traffic accidents to unwanted sexual encounters. He hopes to explore these links further in future research.

“There's so much more to learn about risk factors for drinking in general, but particularly young adult drinking,” he said. “Most people who drink will have a drink or two and it scratches that itch. But for some folks, it just starts a cascade of having more and more. The drive to understand that differentiation gets me out of bed every morning.”

Robert Leeman is the Mary F. Lane Endowed Professor in UF’s Department of Health Education and Behavior in the College of Health and Human Performance and associate director of the Southern HIV & Alcohol Research Consortium.