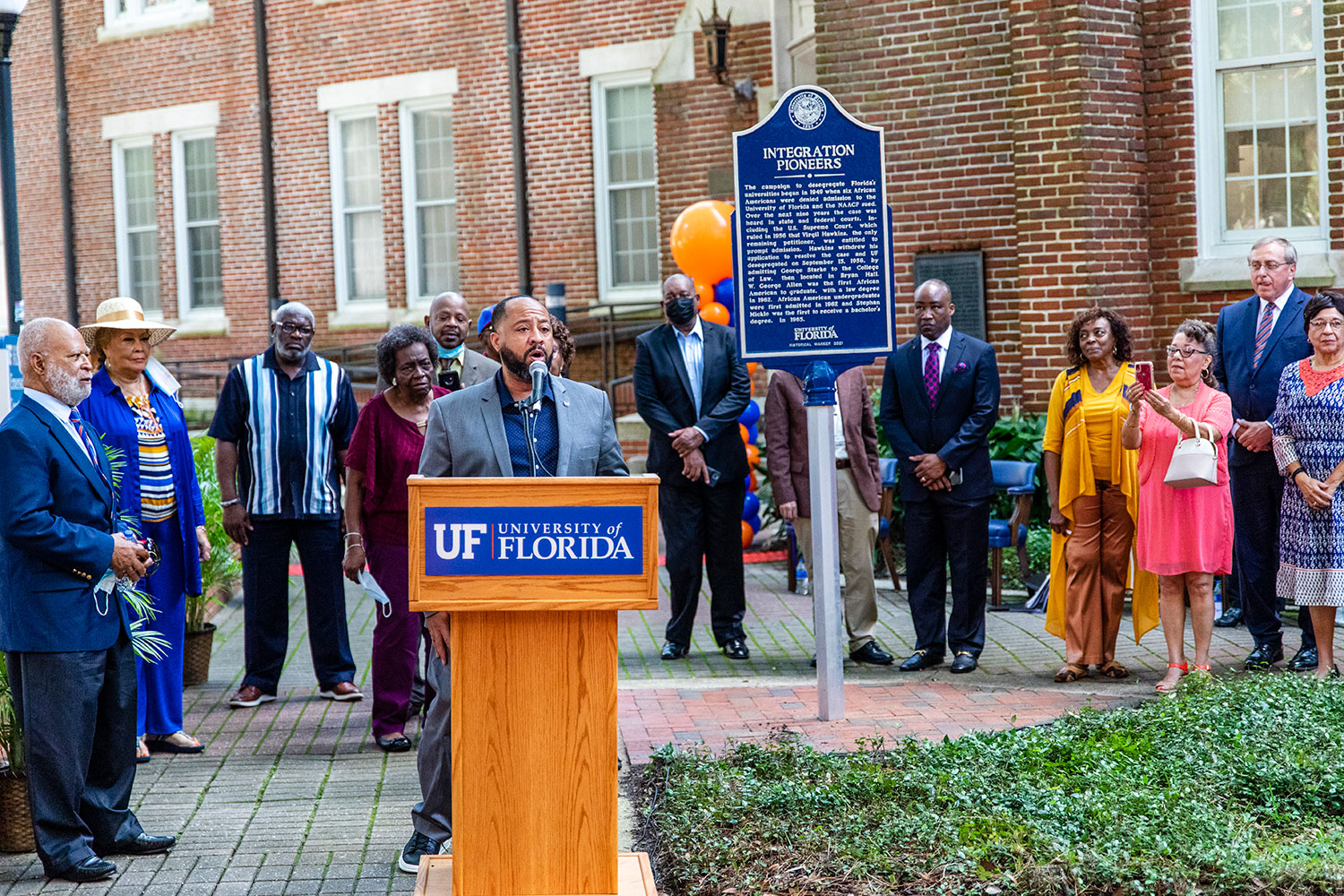 The University of Florida unveiled on Wednesday a historical marker honoring the integration pioneers who led the charge to desegregate the institution.

The marker honors the efforts of Virgil Hawkins, one of six African-Americans who sued the university after being denied admission in 1949 solely based on their race. Other pioneers recognized on the marker include George Starke, the first Black student admitted at UF; W. George Allen, the first African-American to graduate with a law degree from UF; and Stephan Mickle, the first to receive a bachelor’s degree in 1965.

"With the new marker, we officially acknowledge and honor those students, Mr. Hawkins, and all the firsts who bravely became the first Black students in their classes, in their residence halls and in their academic programs,"  UF President Kent Fuchs said during the unveiling.

"We honor their sacrifice. We honor their courage and their resilience," he added. "Ultimately, we honor their legacy of giving the opportunity for a college education to all future generations, fulfilling our university’s mission from the beginning of serving all people."

The marker, which was dedicated on the 63rd anniversary of UF's desegregation, stands in the Emerson Courtyard, outside the west entrance of Bryan Hall, which housed UF's College of Law at the time of the lawsuit. UF historical markers on campus and throughout the state recount campus history and culture and highlight individuals and groups who have made important contributions, according to the program's website.

More than a dozen family members of the integration pioneers attended the dedication event, including Harriet Livingston, Hawkins’ niece, who addressed the crowd. In addition to fulfilling his "ordained purpose and calling" of integrating UF, Hawkins accomplished his dream of becoming a lawyer, she said.

"May this marker stand as a forever reminder of our people's tradition to take a stand and fight for the inequities and injustices of a society once denied an equal education in the state of Florida," Livingston said.

Though Hawkins accomplished his goal of desegregating the university, he spent decades working to achieve his dream of becoming a lawyer. When he first applied to attend UF's College of Law in 1949, Hawkins was in his early 40s.

Courts consistently ruled against him attending UF. Nine years after the battle began, Hawkins made a compromise: He withdrew his application to the university on the condition that other African-American students be admitted in the future, according to UF's Center of the Study of Race and Race Relations.

It was Allen who encouraged Mickle to apply to attend UF.

Mickle went on to become the first African-American to earn an undergraduate degree at UF, and the second to earn a law degree from the institution.  His mother, Catherine, was among those attending the dedication on Wednesday. She also addressed the crowd, recalling Stephan's perseverance.

She said Stephan would walk home from UF, often looking sad. Other students would not speak to him and directed obscene gestures and derogatory remarks at him. Only the janitor spoke to him, she recalled. But negativity fueled his desire to succeed.

"He was determined to be successful and to make his parents proud," Catherine Mickle said. "As parents, we encouraged him to learn to trust his feelings. Uphold his beliefs. Don't walk away from what is right. Be courageous and bold. Most of all, let yourself be humble. And remember to be kind. Have respect for yourself and others. Have dignity and honor. And be proud of all you do."

"And so, he was all of that," she added. "And your family is very proud of you."