Could fiber — long considered something to avoid in developing countries — help kids thrive? 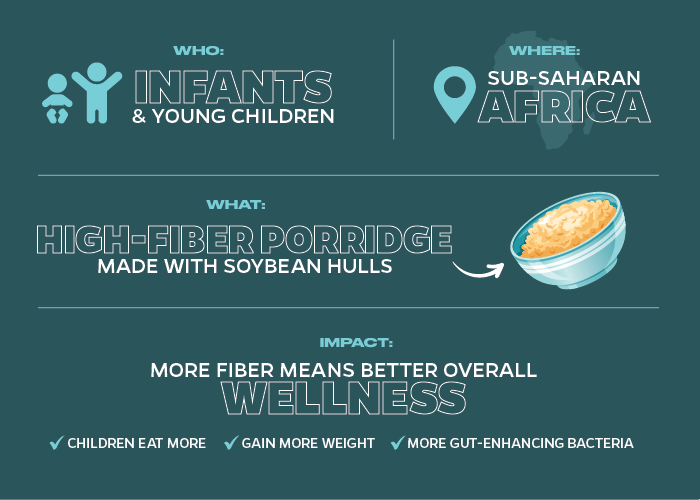 A study conducted by University of Florida researchers has found that supplementing the diet of infants and young children in sub-Saharan Africa with a porridge made with soybean hulls can improve their overall wellness by normalizing the consistency of their stool and improving the levels of “friendly bacteria” in their guts.

The mothers who participated in the study noted that the appetite and weight of their children improved when consuming the soybean hull fiber porridge.

The single-blind study was conducted by Wendy Dahl, Ph.D., an associate professor of nutritional sciences with UF/IFAS; Edda Lungu, a then-graduate student at UF; and Jérémie Auger and Amanda Piano of the Rosell Institute for Microbiome and Probiotics.

Its findings challenge the nutrition recommendations of the Food and Agriculture Organization of the United Nations, which has long dissuaded the consumption of fiber.

“I don’t think they considered the potential health implications,” said Dahl, one of the lead authors of the study. “Yes, there needs to be recommendations to limit levels of antinutrients in some fiber sources but others are very low in antinutrients. But they totally missed the boat on the importance of fiber to help establish a strong and resilient microbiota profile.”

Traditionally, when people think of fiber, they think of it as a solution to constipation, Dahl said. But it is rarely thought of as a solution for loose stools.

In Malawi, there is no dietary fiber requirement for children and adults. Also, groups like UN’s FAO discourage high fiber diets because of phytate — a natural substance found in plant seeds, beans, nuts, and grains —  that interferes with the body’s ability to absorb minerals.

As a result, when using soybeans, mothers would most often remove the hull and throw it away. In the United States, soybean hulls are considered a byproduct of extracting soybean oil or soybean meal.

But soybean hulls are low in phytates.

“They just did this blanket statement,” said Dahl of nutritional guidelines that discourage the intake of fiber. “Removing these types of fiber, perhaps, has done more harm than good.”

In the case of this six-month study conducted in 2018 in the Lilongwe district of Malawi, soybean-maize blends were milled and soy hull fiber was added to the flour. The mothers of 79 children, aged six to 36 months, were provided with packages on a weekly basis with enough flour for two servings a day. Of the 79 who participated, 10 received a maize-only flour with no added soy or soy hulls.

Of the 79 mother-child pairs enrolled in the study, 35 completed it. Researchers believe the distance mothers had to travel with their children for weekly appointments was the biggest contributing factor to the high drop-out rate of participants.

However, of the 35 who made it through the end of the study, 14 participated in a focus group to discuss the feasibility of the porridge provided. The mothers reported liking the soybean hull blend the most because of its appearance, taste, aroma, and overall acceptability. Additionally, they reported their children began eating more and gained more weight.

“For my child, diarrhea was normal such that I stopped taking her for medical attention because we thought that’s how things are supposed to be,” a mother in the study reported through a translator.

In addition to the positive comments from parents, researchers found the children who took the soy hull porridge had increased intakes of fiber. Additionally, the levels of gut bacteria thought to be health-enhancing were higher in those same children.

Dahl said the next step would be to conduct a large clinical trial that allows for easier access to the mothers and children to avoid such a large drop-out. The team will be presenting their findings in the coming months at an international nutrition conference.