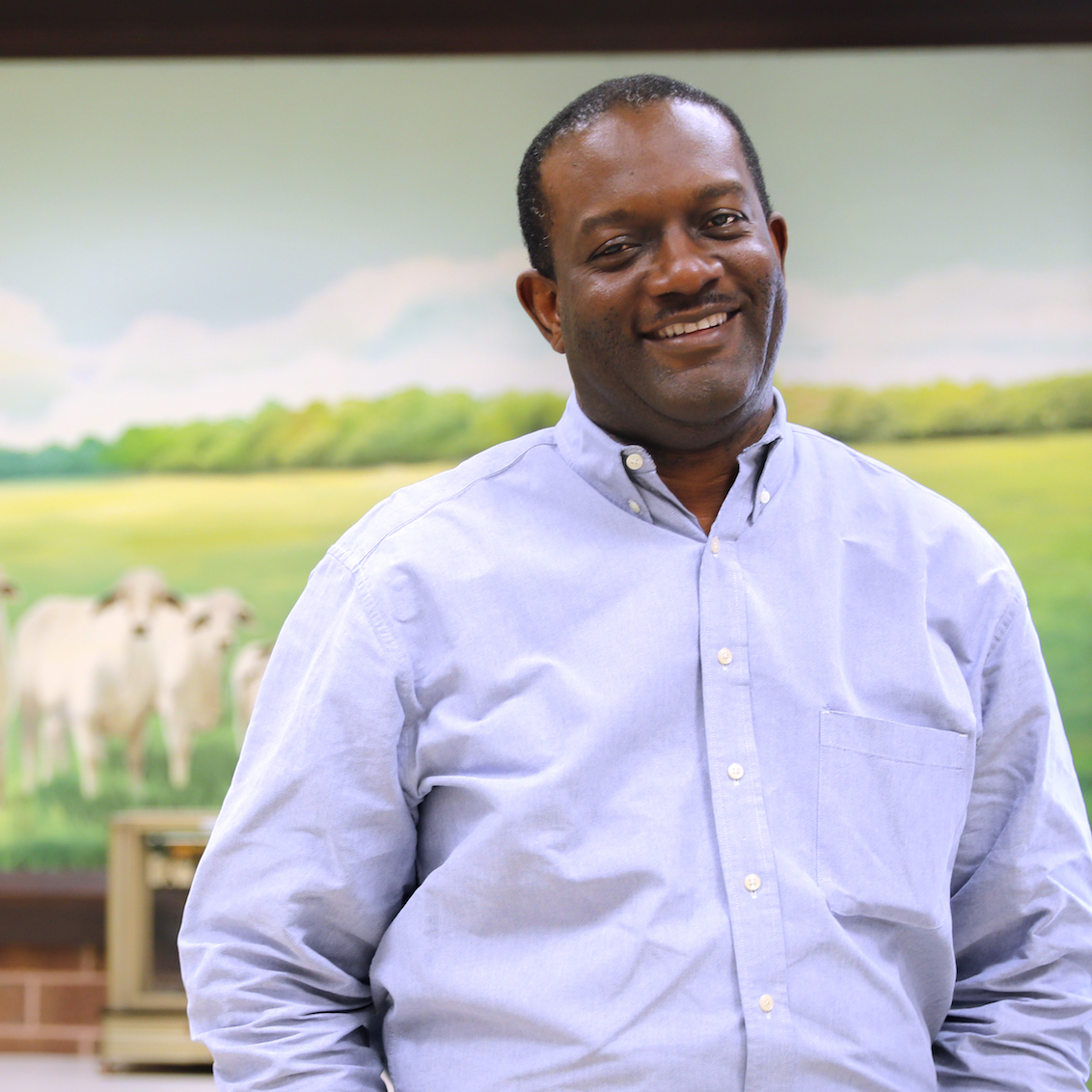 A cow — porcelain, orangish and no bigger than a kitten — is frozen in silent step on Gbola Adesogan’s office desk. Parked beside the heifer’s rump is a rawhide-splotched scooter. A hose slithers from udder to gas tank, uniting the peculiar pair. The artist’s message, if there is one, is pure guess.

Adesogan grins when asked about the quirky sculpture. He discovered it in Rome, while there with University of Florida colleagues Jack Payne and Geoff Dahl for a United Nations summit on world hunger. The cow and scooter were tucked inside a hole-in-the-wall shop specializing in motorcycle accessories. “[Dahl] said I’d never find anything like it again,” Adesogan jokes.

Or, his traveling companion could have said, that’s just so, so, so perfectly Gbola Adesogan.

One of the university’s star scientists, the ruminant nutrition professor is, above all else, a spiritual man — a man deep in faith. He’s also a family man. His daughters, Olutosin and Olutomi, even followed their father to UF for their college educations. But prominent, too, on the list of things Adesogan most adores are cows and motorcycles. 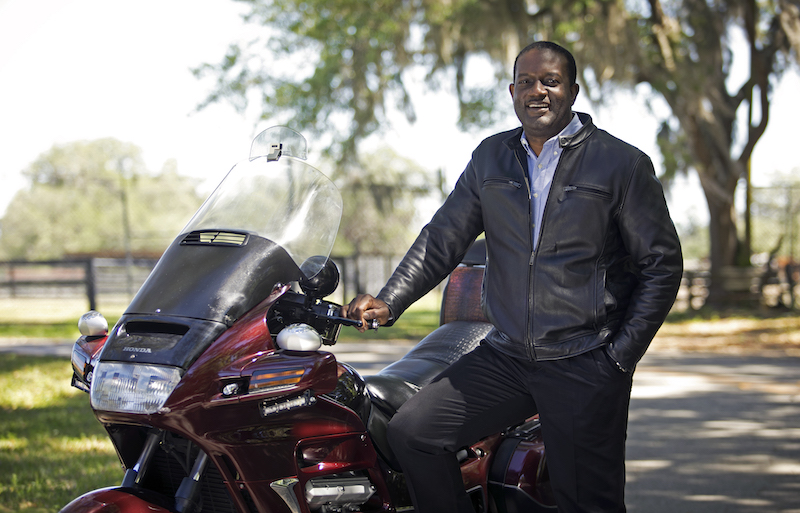 Of Cows and Fortitude

Ibadan, Nigeria, is a city of high-rises and shantytowns, corporations and street peddlers, universities and soccer academies. The rambling metropolis on Africa’s west-central coast — just past where the slender south turns the corner into the continent’s vast north — is home to 3 million people. Adesogan is one of its sons.

Headquarters for the famed International Institute of Tropical Agriculture are there, too. For 50 years the organization has been searching for solutions to Africa’s sweeping hunger, malnutrition and poverty epidemics. Credit goes to its livestock research station, at least in part, for Adesogan’s resolve to bring nourishment to people in the world’s most barren pockets. It wasn’t the center’s reputation or deeds that inspired him, though. The institute, ironically, was Adesogan’s introduction to food unfairness.

“I remember one day when I was relatively young, I saw that the cows within the fence of the research station were well fed and in good condition. And the cows on the outside of the fence were scrawny,” he recalls. “I wondered what it is that makes this huge difference. And why is it that whatever it is, it can’t get through this chain-link fence to improve the condition of the animals on the outside.”

He directs the UF/IFAS-managed Feed the Future Innovation Lab for Livestock Systems, a global alliance of about 100 universities and research organizations. The coalition works with communities in Cambodia, Ethiopia, Nepal, Niger, Burkina Faso, Rwanda, Kenya and Uganda to improve nutrition and livelihoods. All places where frail crops alone don’t come close to providing enough sustenance.

The answer, Adesogan is convinced, is cattle — and their cousins: goats, sheep and chickens.

“The diets of poor people are starchy foods, which fill stomachs but don’t meet all the nutritional needs,” he explains. “They need animal products.”

Big league backers agree. The U.S. Agency for International Development rallied to the movement with a $49 million grant to establish UF’s lab, in partnership with the International Livestock Research Institute. And in January, the Bill & Melinda Gates Foundation joined the cause, granting the university $8.7 million to alleviate poverty and undernourishment in Ethiopia and Burkina Faso.

One reason for that kind of support is the man spearheading UF’s program, says Payne, UF’s senior vice president for agriculture and natural resources. When the university petitioned USAID for the innovation lab, which launched in October 2015, Adesogan led the multidisciplinary team that submitted the application.

“We thought it was important to have someone from a developing nation as leader, for credibility and rapport with our partners in Africa and Asia,” Payne says.

Adesogan’s knack for collaboration with other scientists, history of championing international work and expertise in animal nutrition further made him “a great match for the project,” Payne adds.

“We turned out to be right on all counts.”

“The perception of folks when Gbola steps in the room is, ‘Wow, this guy knows where we’re coming from. He’s lived it. He understands the issues.’”

The professor’s well-worn passport is proof that people are taking notice. Stamps denoting the foreign countries Adesogan has visited fill the passport’s pages. Each representing somewhere he’s been — and, oftentimes, returned to again and again — to lessen hunger and malnutrition.

“I’ve always wanted to make a difference,” he says. “It’s my moral obligation as an African, and as a person who God has allowed to live in a country that is blessed with so many resources, to try to give back.” 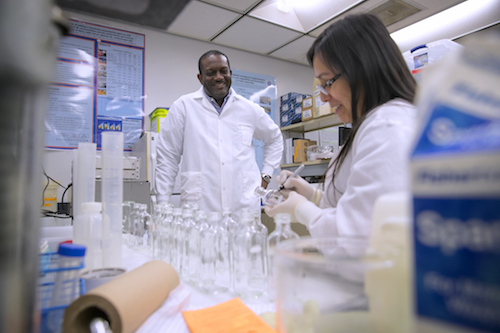 Numbers are frightening. One in nine of us, roughly 795 million people, are chronically malnourished, the United Nations estimates. And it’s about to get much, much worse. Statisticians and scientists point to Year 2050 as a tipping point, a looming moment of truth. We humans will be a bloated 10 billion then. That’ll be like adding another 235 New York Cities to the global neighborhood. That’s also the year that, unless something is done soon, the world’s farmers, ranchers and fishermen will no longer grow, raise and catch enough food for all our plates.

Americans should be fine. Developing countries, though, will be hurting — regions where food sources are unreliable, populations are swelling and rising oceans are chewing at seaside towns and lands. To complicate things even more, families in those destitute places are already often desperately malnourished. To boost nutrition now and dodge mass malnutrition later, more animal-source foods will need to be consumed, Adesogan predicts.

“Gbola’s work is critical to ending worldwide ‘hidden hunger,’ where people get enough calories but not enough nutrients,” Payne says. “Gbola and his team are helping make it possible for even the poorest of rural farmers to improve livestock production, which not only produces income but a homegrown source of nutrients.”

And not just overseas. Western mindset is a major obstacle. Trends toward vegetarianism and less meat, so popular in the United States and Europe, aren’t practical where food choices are limited and nutritional supplements missing. The notion that fewer farm animals mean less planet-warming methane gas — not to mention more acreage and water for crops — is a fine argument in countries thick with livestock herds and cornucopias overflowing with fruits and vegetables, but not in poor nations where a scattering of cows, goats or chickens might be all there is between a wholesome diet or sparse one.

“People need to realize that in developing parts of the world, people don’t have the choices we have here,” Adesogan says. “We are extremely blessed here in the U.S. Food is cheaper here because of the great work our farmers have done.”

“Feed is pivotal because feed drives everything,” Adesogan says, listing it as one of the four pillars for good livestock production. The other three are genetics, management and general animal health.

“A lot of people just think, ‘We’ll bring in new breeds, we’ll send vaccines.’ Those interventions are short-lived because we need to look at the whole picture,” he notes. “An indigenous cow is very capable of resisting diseases, tolerating the climate and surviving on a basic ration. Introduce improved breeds of cows and sheep and goats to those same countries, and they won’t make it.”

Scientists have come up with creative cures — if, that is, farmers and governments are open to them. Like beer-brewed grains and hops. Rather than dumping spent mash in landfills, the protein-rich “waste” can be used in livestock feed. Then there are enzymes and urea, which make feed more digestible. Even cutting stalks into smaller pieces makes a difference. Another tactic is to relocate quality feeds from one world region to another scant with nutritious alternatives.

“The first thing is to look at what’s available locally,” Adesogan says. “Then, what else is out there that’s likely to thrive in the environment, that’s adaptable to the climate, that’s resistant to pests.”

All of which — along with Feed the Future’s other efforts to reduce poverty and undernourishment, and to help poor farmers become more resilient while adopting practices that are less harmful to the environment — give Adesogan reason to shake-off doom-and-gloom prophecies.

“As long as we continue working together and the research that is done is used to shape policies, then I think we’ll prevent malnutrition and we will be able to feed the world well,” Adesogan says. “So that gives me hope.” 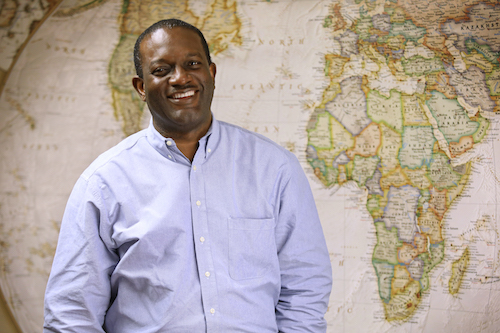 A little black notebook, names scribbled inside a revenge list. A reminder to the long ago Gbola Adesogan of classmates and acquaintances who had done him wrong — and were due payback. Back then, his college years in Nigeria, Adesogan’s reputation was that of a bad-tempered brawler, a hooligan who’d sometimes need to be peeled off the person he was battering.

He’d been raised Christian, content to walk his church’s teachings. At boarding school, he drifted. In college, that drift turned into rebellion. Adesogan liked all-night parties and mugs frothing with lager. Church had little appeal.

“I was notorious in a number of ways. I was very vengeful and vindictive, and I didn’t care for people,” he says, reflecting on those lost years.

A powerful refurbished police motorcycle was his routine weapon of self-destruction. On it, he’d race through Ibadan’s streets and highways with abandon — anticipating, even hoping, that a crash would come.

“I used to ask myself, ‘What’s the meaning of life? Why are we here?’ and so on. As I came to know the Lord many of those pieces fell into place,” he says. “I began to understand there’s a reason for me as an individual. I have a role to play. I have something to contribute to drive away those demons.”

All these years later, the wild wanderer of Adesogan’s youth is at peace. In his place is a wiser, more tolerant man. “Transformed,” Adesogan says. “Nice” is how Dahl describes him, “genuine” and “humble.”

Even though Adesogan has turned away from the hauntings of his youth, a few things have remained: inquisitiveness, affection for animals, the thrill of a motorbike. So it’s little surprise, really, that he still hears the call to ride. Nowadays, it’s his 650-pound, burgundy Honda ST1100 touring motorcycle that beckons.

“He doesn’t even have a car, so I suspect there’s some personal sacrifice in his spending so much time in airplanes and so little on two wheels,” Payne says. “Of course, he’d never complain about the inconvenience and fatigue from flying tens of thousands of miles a year.”

Adesogan brightens when talking about his Honda.

“There’s nothing like riding on the open road. You have the breeze in your face. It’s quiet. It’s serene. It gives you an appreciation of nature. I don’t know how to describe it. It releases a lot of stress and it’s very fulfilling,” he says.

And that faith he tried so hard to rebuff in college? It’s now the center of all he does, he says.

“My Christianity is probably one of the main reasons I’m doing what I’m doing. Before I became serious with my faith I had other interests, and things like this were not high on my radar at all,” Adesogan says.

“When you couple that with the fact I am from a developing country, it’s my duty.”

This story appears in the Summer 2018 issue of the Florida GATOR alumni magazine.