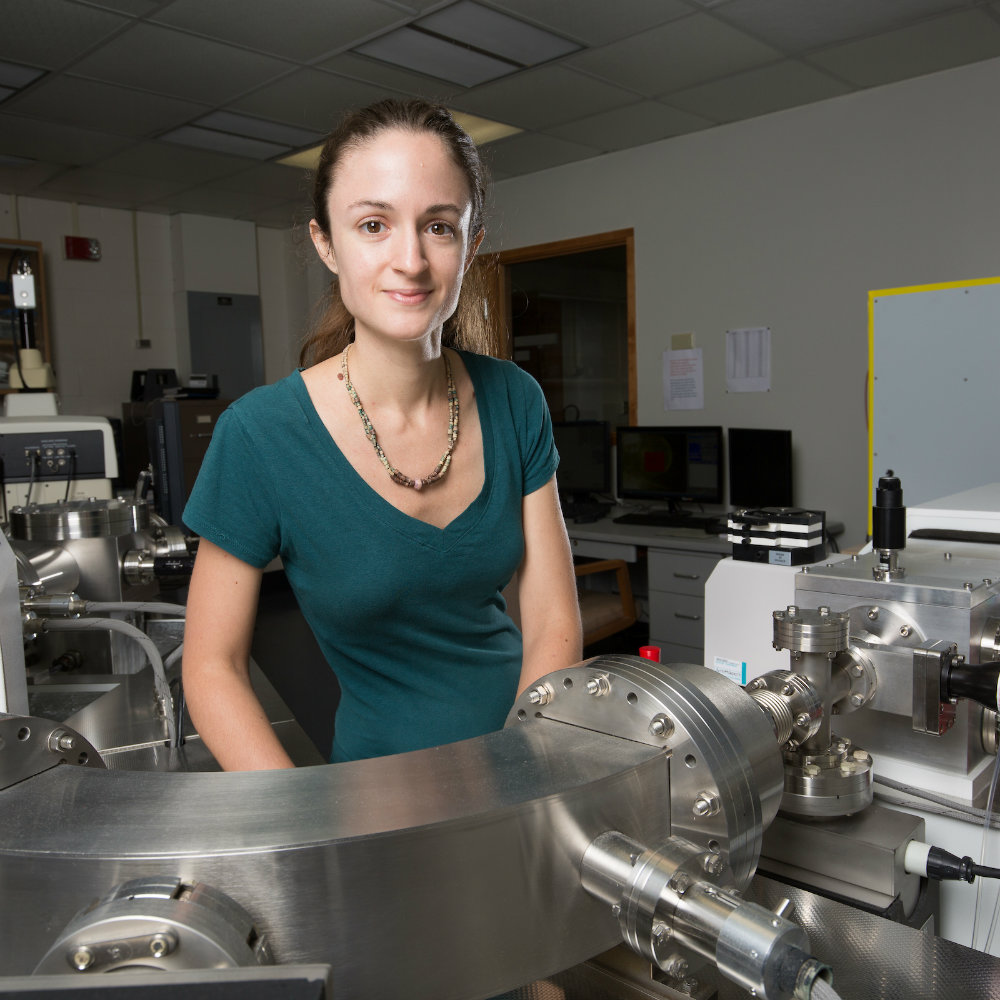 Police detectives analyze isotopes in human hair to find out where a murder victim was born and grew up. Researchers from the Smithsonian Tropical Research Institute in Panama, the University of Florida and the University of Arizona combined clues from carbon, nitrogen, oxygen and strontium isotope analysis discovering the earliest evidence that the Maya raised and traded dogs and other animals, probably for ceremonial use.

The results were published today in the Proceedings of the National Academy of Sciences.

“In Asia, Africa and Europe, animal management went hand-in-hand with the development of cities,” said study lead author Ashley Sharpe, an archaeologist at the Smithsonian Tropical Research Institute who received her Ph.D. from UF in 2016. “But in the Americas, people may have raised animals for ceremonial purposes. The growth of cities doesn’t seem to be directly tied to animal husbandry.” 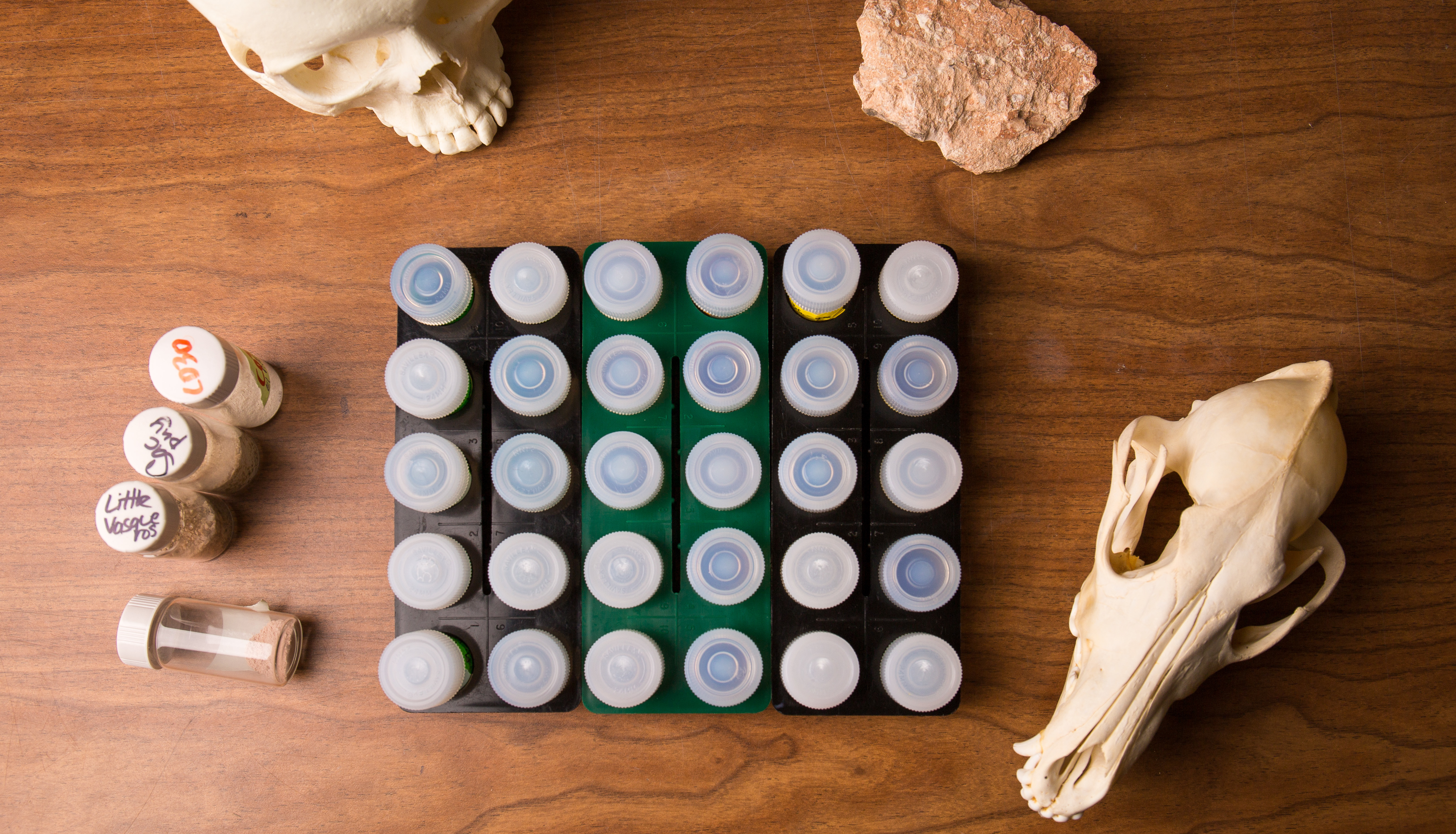 Ground rock and human and animal teeth are inserted into vials before the lead is extracted to do isotopic analysis. This particular study focused on animal remains. You can learn more about Sharpe's previous work with human teeth here.

Study researchers found that animal trade and management began in the Preclassic Period some 2,500 years ago and intensified during the Classic Period, making it likely that organized ceremonies involving animal and human sacrifice and raising animals for food played important roles in the development of Maya civilization.

Carbon in animals’ bodies comes from the plant tissues they consume directly or indirectly. Most plants use the most common type of photosynthesis to turn carbon dioxide into carbohydrates. This process leaves mostly the lighter carbon isotope, carbon 12, behind, bound up in carbohydrate molecules. Corn, sugar cane and other grasses use another type of photosynthesis that concentrates heavier, carbon 13 molecules. Nitrogen isotopes in proteins demonstrate a similar pattern.

Sharpe, who began the research as a doctoral student at UF, and study co-authors analyzed the isotopes in animal remains from Ceibal, Guatemala, a Maya site with one of the longest histories of continuous occupation, and one of the earliest ceremonial sites. Most of the bones and teeth they tested were from the Maya Middle Preclassic period (700–350 B.C.).

“The animal remains fall into two categories, those with lower carbon isotopes, indicating they were eating mostly wild plants, and those with higher isotopes, which were probably eating corn.”

All of the dogs, two northern turkeys, Meleagris gallopavo, the turkey species that was eventually domesticated, and one of two large cats were probably eating corn or other animals that fed on corn, such as a peccary (wild pig).

Because people in the region often killed animals that came into gardens and areas where crops were being cultivated, it is possible that peccaries and turkeys may also have been eating crop plants, but it is likely that turkeys were managed by the end of the Classic Period.

Deer bones showed butcher marks, but they were hunted from the forest, not domesticated according to isotope analysis of bones that also had lower carbon isotopes.

One large cat and a smaller cat, probably a margay (Leopardus wiedii), had lower carbon isotopes indicating that they ate animals that fed on wild plants.

“This is the first evidence from the Americas of dogs being moved around the landscape,” Sharpe said. “Around 1000 A.D. there’s evidence that dogs were moved out to islands in the Caribbean, but the Ceibal remains are dated at about 400 B.C.”

Part of a big cat’s jaw bone with teeth was found with one of the dogs in the same deposit.

“The interesting thing is that this big cat was local, but possibly not wild,” Sharpe said. “Based on its tooth enamel, it had been eating a diet similar to that of the dogs since it was very young. Perhaps it was captured and raised in captivity, or it lived near villages and ate animals that were feeding on corn. We still have to look at the DNA to figure out if it was a jaguar or a puma.”

Sharpe is looking forward to understanding more about the context of these finds. “The results in this publication are based on excavations we did in 2012. My colleagues at the Ceibal-Petexbatun Archaeological Project will publish additional analyses, and I’m looking forward to finding out if all of the human remains at the site are from the region.”

“It’s interesting to consider whether humans may have had a greater impact managing and manipulating animal species in ancient Mesoamerica than has been believed,” Sharpe said. “Studies like this one are beginning to show that animals played a key role in ceremonies and demonstrations of power, which perhaps drove animal-rearing and trade.”