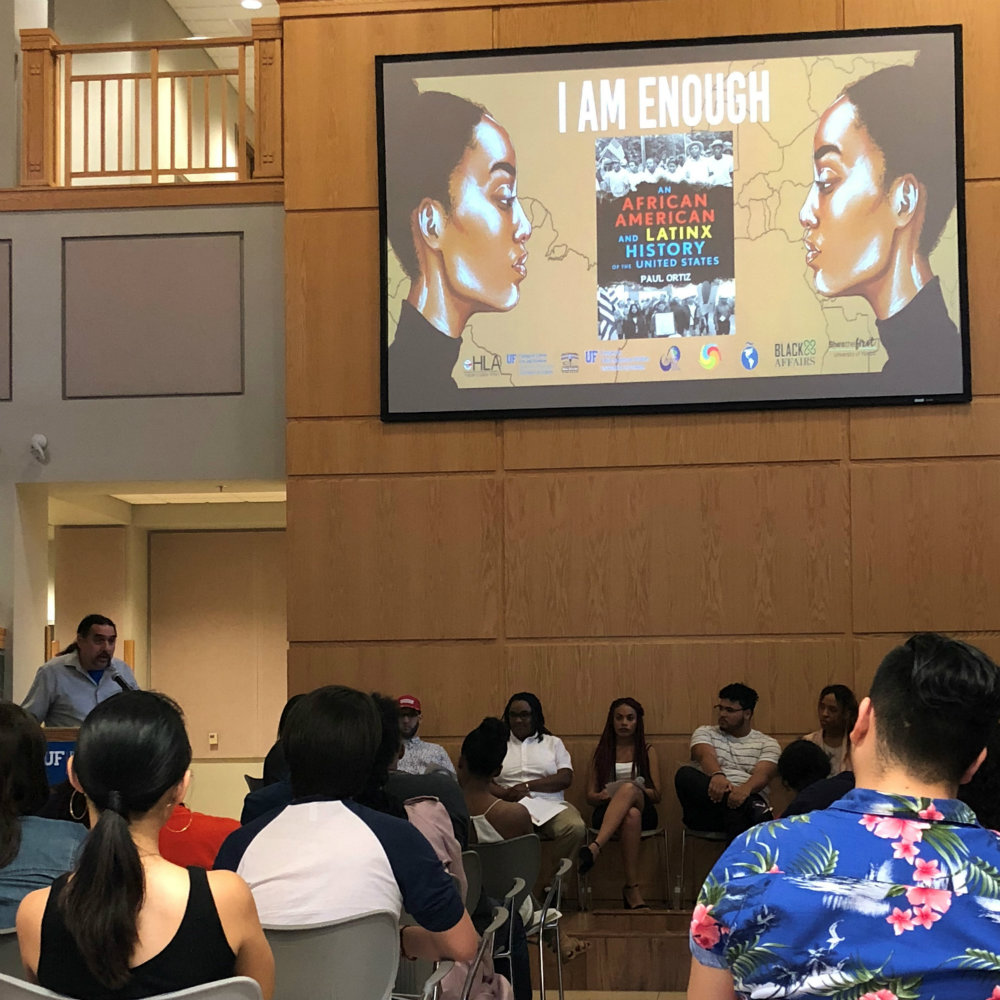 More than 100 students and faculty attended the “I Am Enough: Afro-Latinx” panel at Pugh Hall on March 20 to learn about the experiences and challenges of the Afro-Latinx community. The nearly three-hour event explained the common misconceptions and obstacles faced by black Latin Americans who are often forced to take a side on their own mixed culture. The event also served as a call to action for black and Latinx communities to find unity in their commonalities and remember that although there has been progress made, there is still a long way to go.

“We are a society of forgetting . . . our struggles and our triumphs,” said Paul Ortíz, director of the Samuel Proctor Oral History Program and associate professor of history, who began the event by discussing his observations and studies, having recently published his book, “An African American and Latinx History of the United States.” The main issue with instituting change, he says, is people forgetting the struggles that led up to them in the first place, primarily due to the gaps in the education students receive about American history. Key factors omitted from the education system are the influences from Latin American, African and Caribbean histories that forged social, political and cultural advancements in the U.S., he added.

Building from our progress, Ortíz said, is how people can channel their anger into action at both UF and in their own homes when educating others about diversity. The panelists, which included faculty members and students from both the black and Latinx communities, also agreed with this contention.

For panelist Shania Stephens, a student, being part of the Afro-Latinx community means not only claiming the identity, but being proud of it. Edward Hiraldo, another student, corroborated that message, saying that it was hard to feel that pride when growing up because of the negative connotations people impose of their culture’s characteristics, including narrow definitions of “acceptable” hair styles and parental pressures of avoiding “ghettoness.”

The Afro-Latinx identity also has it hand in influencing higher education experiences. At UF, student organizations and programs help students from all backgrounds find a home, along with an avenue to promote initiatives that expand awareness of diversity issues and increase inclusivity across campus.

Franeśa Brown, student, shared how student organizations at the university helped her find herself and learn about the commonalities between different ethnic groups. She said that higher education exposes people to the varying backgrounds of black culture.

Shortfalling representation is at the core of the obstacles created by lack of awareness of multicultural history and experiences. Panelists concur that the movie and television industry have a clear preference for using lighter-skinned, glamorized Latinx figures.

“People forget that there’s more than one type of Spanish,” said Alyssa Estrada, another student panelist. The Latinx community is composed of 20 Caribbean and South American countries, yet many nationalities and races, including Peruvians and Ecuadorians, are not represented in the media, Estrada said.

The concluding theme of the night was that the Afro-Latinx community needs more than just allies; it needs solidarity.

Correcting others and holding people accountable, despite how intimidating it may be to do, can help realize the popular notion of being “woke,” by turning it into proactive dialogue, said Bryce Henson from the Center for African American Studies.

“Focus on 10 seconds of courage, repeated behavior can change your lives and others,” Hiraldo said.

Diego Castillo, a Warrington graduate student who served as the main organizer of the event, ended the night by stressing the importance of keeping the conversation going with similar events that give people opportunities to understand one another.

“It is important to open the door for dialogue and conversation especially in this day in age where everything and everyone attacks each other instead of listening to each other,” Castillo said.

Other speakers at the event included Tanya Saunders from the Center for Latin American Studies, Diana Moreno from the MCDA division and student panelist Deionté Harvey.