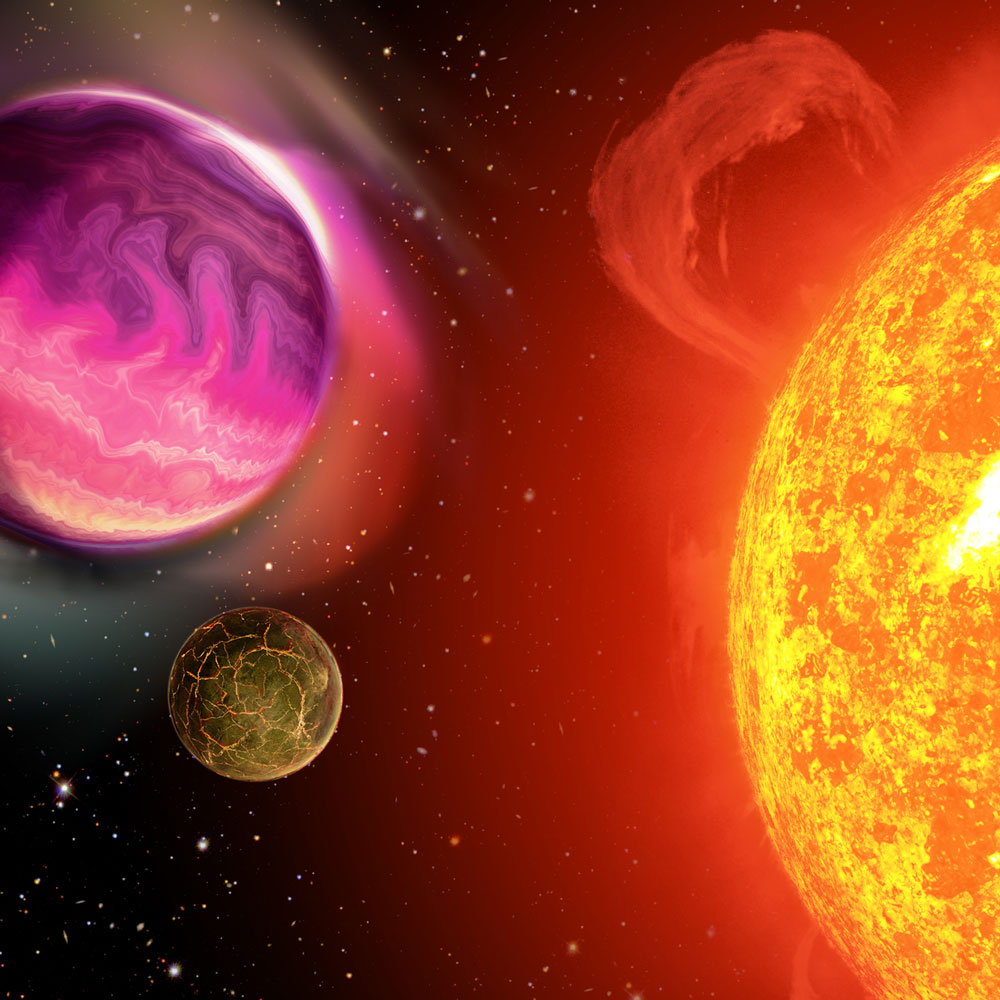 Everything we know about the formation of solar systems might be wrong, says University of Florida astronomy professor Jian Ge and his postdoc, Bo Ma. They’ve discovered the first “binary–binary” – two massive companions around one star in a close binary system, one so-called giant planet  and one brown dwarf, or “failed star” The first, called MARVELS-7a, is 12 times the mass of Jupiter, while the second, MARVELS-7b, has 57 times the mass of Jupiter.

Astronomers believe that planets in our solar system formed from a collapsed disk-like gaseous cloud, with our largest planet, Jupiter, buffered from smaller planets by the asteroid belt. In the new binary system, HD 87646, the two giant companions are close to the minimum mass for burning deuterium and hydrogen, meaning that they have accumulated far more dust and gas than what a typical collapsed disk-like gaseous cloud can provide. They were likely formed through another mechanism. The stability of the system despite such massive bodies in close proximity raises new questions about how protoplanetary disks form. The findings, which are now online, will be published in the November issue of the Astronomical Journal.

HD 87646’s primary star is 12 percent more massive than our sun, yet is only 22 astronomical units away from its secondary, a star about 10 percent less massive than our sun, roughly the distance between the sun and Uranus in our solar system. An astronomical unit is the mean distance between the center of the Earth and our sun, but in cosmic terms, is a relatively short distance. Within such a short distance, two giant companions are orbiting the primary star at about 0.1 and 1.5 astronomical units away. For such large companion objects to be stable so close together defies our current popular theories on how solar systems form.

The planet-hunting Doppler instrument W.M. Keck Exoplanet Tracker, or KeckET, developed by a team led by Ge at the Sloan Digital Sky Survey telescope at Apache Point Observatory in New Mexico, is unusual in that it can simultaneously observe dozens of celestial bodies. Ge says this discovery would not have been possible without a multiple-object Doppler measurement capability such as KeckET to search for a large number of stars to discover a very rare system like this one. The survey of HD 87646 occurred in 2006 during the pilot survey of the Multi-object APO Radial Velocity Exoplanet Large-area Survey (MARVELS) of the SDSS-III program, and Ge led the MARVELS survey from 2008 to 2012. It has taken eight years of follow-up data collection through collaboration with over 30 astronomers at seven other telescopes around the world and careful data analysis, much of which was done by Bo Ma, to confirm what Ge calls a “very bizarre” finding.

The team will continue to analyze data from the MARVELS survey.