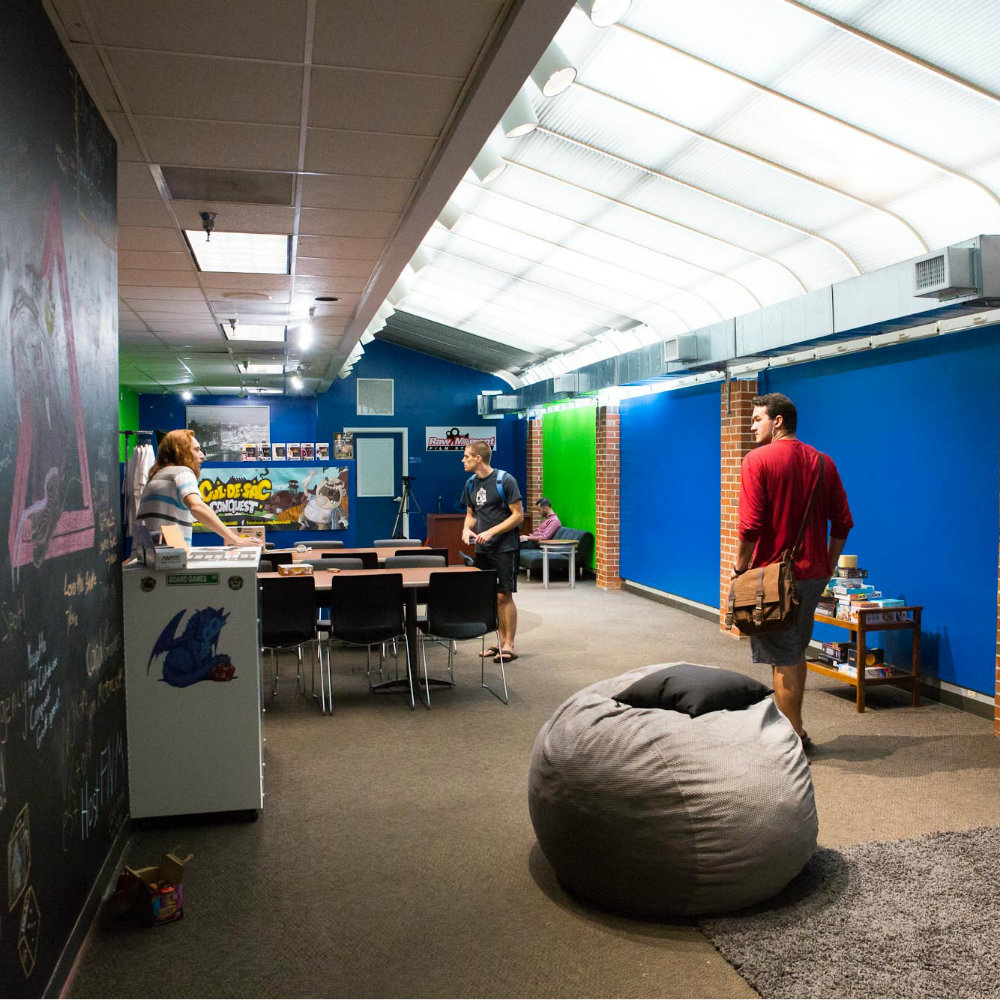 The companies, Atheris Games and Raw Moment Studios, were selected through an innovative business planning competition hosted by a coalition of the J. Wayne Reitz Union, the Warrington College of Business Entrepreneurship and Innovation Center and the Miller Retail Center.

The annual competition requires participants to develop and present a large-scale business plan to a panel of investors, retail experts, faculty mentors from the College of Business and Reitz Union representatives. Winning student entrepreneurs receive a lease for a 2,048-square-foot space in the highly trafficked Reitz Union, furnishings and fixtures for the leased space, utilities such as IT support and housekeeping, advising from retail and entrepreneurial experts, and access to Reitz Union strategic partners.

The space has been an undeniable asset to Atheris Games, a board game publishing company and retail store created and operated by UF students Andrew Birkett and Chuck Call. Birkett is an undergraduate marketing student and the CEO of the company; Call is a graduate candidate for entrepreneurship and the company’s CFO.

Atheris Games launched a Kickstarter campaign for its first self-produced game, Cul-De-Sac Conquest, in October 2015. The card game is themed around annoying neighbors and features original artwork and copy—it has also raised over $20,000 since its Kickstarter debut.

Birkett attributes much of the company’s success to strategic social media usage and other forms of free marketing, including the exposure and credibility that Atheris Games’ retail location in the Reitz Union provides. However, he also considers their success to be a result of their game’s relatable and quirky subject matter.

“It opens people up. Everyone’s known an annoying neighbor, so it gets even complete strangers to share their experiences and stories,” Birkett said.

Atheris Games’ highly accessible location in the Reitz Union has allowed them to partner with gaming clubs and organizations on campus to playtest original games, advertise, and effectively connect with and research their target markets.

The other side of the Reitz Union Incubator space is home to Raw Moment Studios, a full-service creative agency launched by Pablo Casilimas, executive producer and undergraduate advertising student.

Casilimas is a self-taught creative who discovered his passion for production and business while completing an engineering internship. Casilimas realized that he’d always been happiest when behind a camera, and decided to use some of the money from his internship to purchase a professional-grade camera. In his free time, he learned techniques and methods from YouTube videos.

“I’d come home from my internship every day and spend hours researching, practicing. Hundreds of hours … that’s what it takes to get to the professional level,” Casilimas said.

Raw Moment Studios began as a videography business but quickly expanded into a full-service creative agency; the studio is now experienced with website and logo design, promotional video creation, advertisement development and more.

Casilimas said the Reitz Union Incubator has made Raw Moment Studios more accessible to potential customers on and off-campus, as it’s a centralized location that serves as a stop on many Gainesville bus routes.

Though they operate wildly different businesses, Birkett and Casilimas exude the talent and zealous work ethic imperative for entrepreneurs; with their newfound acquisition of space in the Reitz Union, the potential for their businesses seems limitless.