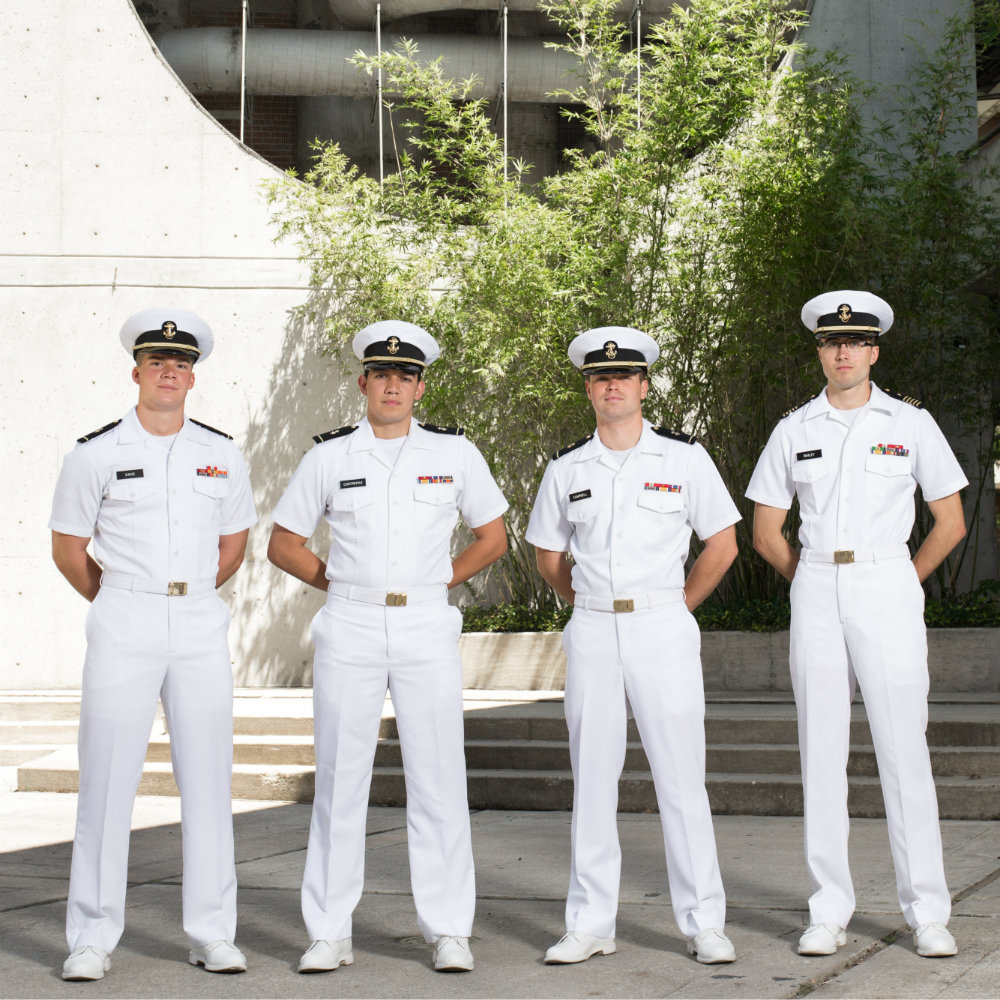 Four soon-to-be graduates of the University of Florida College of Design, Construction and Planning are taking sustainability to sea – and beyond – as they begin active duty in the United States Navy.

Sustainability and the built environment students Adam Campbell, George Andrew Davis, Jr., Gerardo Contreras and David Bailey, have been involved with the Navy ROTC unit on campus since their freshman year and will become officers once they graduate this April.

Sustainability is increasingly recognized as essential. By definition, it is development that meets the needs of the present without compromising the ability of future generations to meet their own needs.

While Campbell, Davis and Contreras began as engineering students and switched to sustainability later in their academic careers, Bailey has been a sustainability student from the get-go.

Bailey received an internship with the UF Office of Sustainability and has been heavily involved with the Gator Gears initiative, a bike rental program for students and faculty on campus.

For Bailey’s research project, he retrieved data from universities across the country to determine what strategies are being used to increase the use of bicycles on campus.

Although there are several campus-wide green initiatives, Campbell was drawn to the sustainability and the built environment program to see first-hand how the design process worked.

“I really enjoyed seeing a project go from the planning phase all the way to the finished product,” he said. “Then having that aspect of making it more energy efficient. Not just going with the conventional practice, but actually going with the innovative practice. It’s a kind of trending towards the future instead of sticking with the past.”

Davis’ research hit closer to home as he created an assessment of the ROTC’s home base on UF’s campus, Van Fleet Hall. The project determined ways to reduce energy and water consumption in the building.

Since its start in 2008, UF’s sustainability and the built environment program has grown to over 100 students, said program director Margaret Carr.

Last year, the program had its first NROTC graduate. And in addition to this year’s four seniors, the program has two lower-division students involved in NROTC as well.

“We believe our major is providing an important grounding for students entering the military because when armed with sustainability principles and techniques, they have great opportunities to influence the future,” she said.

Captain Jim Morgan, commanding officer of UF’s NROTC, agreed with Carr. He said future officers with degrees in sustainability directly contribute to the Department of Navy’s overall strategy of reducing its dependency on fossil fuels through increased use of renewable energy.

“It was not that long ago, maybe five to ten years ago, that the Navy’s annual fuel bill to power our ships was in the billions of dollars,” Morgan said.

As a result, U.S Secretary of the Navy Ray Mabus made increasing the use of alternative sources of energy within the Navy a priority.

Among other green initiatives, Morgan added that in May 2014, Mabus chartered the Navy’s Renewable Energy Program Office to produce or procure one gigawatt of renewable energy generation capacity by the end of 2015.

“This was part of an overall Navy goal of having 50 percent of total Navy energy consumption coming from alternative sources by 2020,” he said. “The end goal is developing cost-effective, long-term alternative energy projects that help increase our energy security while at the same time preserving the environment for future generations.”

Bailey will be stationed in Pearl Harbor and has selected a ship that’s part of the Navy’s Great Green Fleet, a group of ships that employ a number of energy and water saving techniques in their operation.

“She’s one of the first vessels in the Navy to operate off a mixture of biofuels and traditional fuels for the Navy,” he said. “It’s a big push and big point of observation for the Navy to see how effective that is.”

Campbell will also be going to Hawaii, but has selected a different ship than Bailey.

“I joined the Navy to see the world,” he said. “And what better way to start than in Hawaii.”

Contreras will be serving his first tour of duty in Japan, and Davis will be going to flight school in Pensacola to pursue his dream of being a Navy pilot.