Engineering pageant brings out different side of students 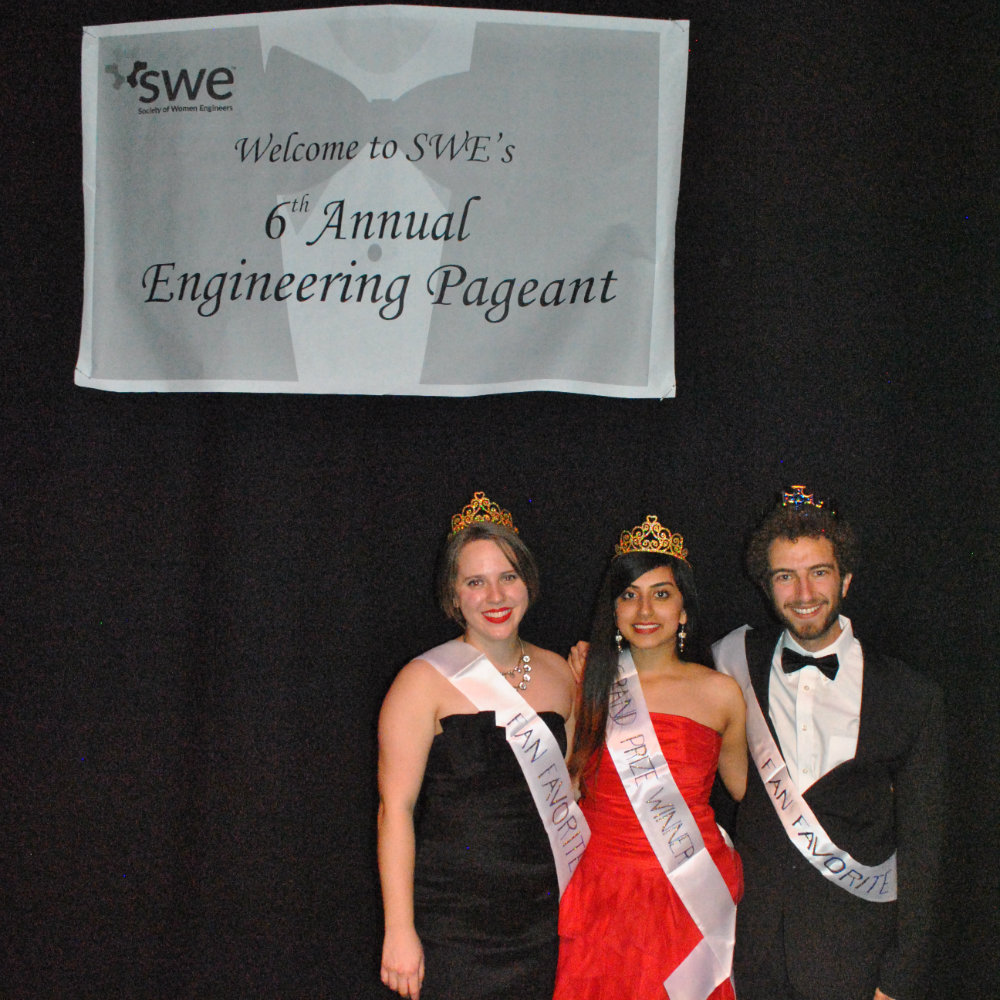 Sahar Kausar’s heart raced as she stood on stage at the Squitieri Studio Theater Feb. 19, a black curtain behind her and an audience of more than 50 in front of her. A first-time pageant participant, the 22-year-old gave herself a quick pep talk as she waited for her big moment.

"Don’t be a scared Sahar, be a confident Sahar," she said to herself.

After dealing with chemotherapy and depression in her freshman year, Kausar, a fourth-year digital arts and sciences engineering major, was eager for the chance to exercise her “confident Sahar” persona. And so she entered the sixth annual Engineering Pageant sponsored by the Society of Women Engineers.

It gave her the opportunity to show a side of herself her fellow students haven’t seen, one that would reveal her talent, accomplishments and style.

“I actually was told it’s okay to take some risks and to try something different,” she said. “I was trying to immerse myself in things I haven’t tried before to see if I could reach a point in my life where I haven’t reached before.”

The Engineering Pageant, originally dubbed “Mr. Engineer,” debuted in 2011. Male students played the role typically played by women at a pageant – being judged by their appearance as well as their talent. The pageant was open to both males and females this year, said Society of Women Engineers president Emily Huber.

“We continued on the tradition mostly because it is so much fun to see all these engineering students go out of their comfort zone and learn some of your friends can sing, dance or play instruments,” she said. “It gives you a whole different side to this person.”

The nine contestants wowed the audience with talents ranging from singing to solving a Rubik’s Cube puzzle in about a minute and a half. Two contestants competed in a lip sync battle, showing off their dance moves while performing hit songs.

Kausar (pictured above, center) chose a self-defense demonstration as her talent, in honor of her former martial-arts master who died several years ago. She had let up on her practice after his death, and had stopped participating in martial arts completely while undergoing chemotherapy.

“I was so happy and proud to share that experience in my life,” Kausar said, “because that was the first time I did martial arts again after several years, in front of other people as well, so it was a very liberating experience for me.”

After the formal wear competition, which featured pageant contestants in suits and dresses, the judges chose five finalists. Each was asked two questions: a serious question and one that was just for fun.

For her serious question, Kausar was asked to name the era she would visit if time travel were possible. She answered that she would revisit her own past, to tell herself everything would turn out okay, and that despite her physical illness and the anxiety and depression that followed, she would one day find herself having an amazing experience at an engineering pageant.

“I was so, so happy,” Kausar said, reliving the moment the crown was placed on her head. “I felt like a lot of scars from my past healed.”

Huber, the engineering society president, said it was gratifying to see Kausar win.

“You could tell even afterwards talking to her she was not expecting that,” Huber said. “It was well-deserved.”

The society allowed the winner to select a prize up to $300. Kausar decided on a DSLR camera because she has always wanted one but never had the money.

“Hearing that I won made my experience for college so much better,” Kausar said. “It was one of the best days of my life.”