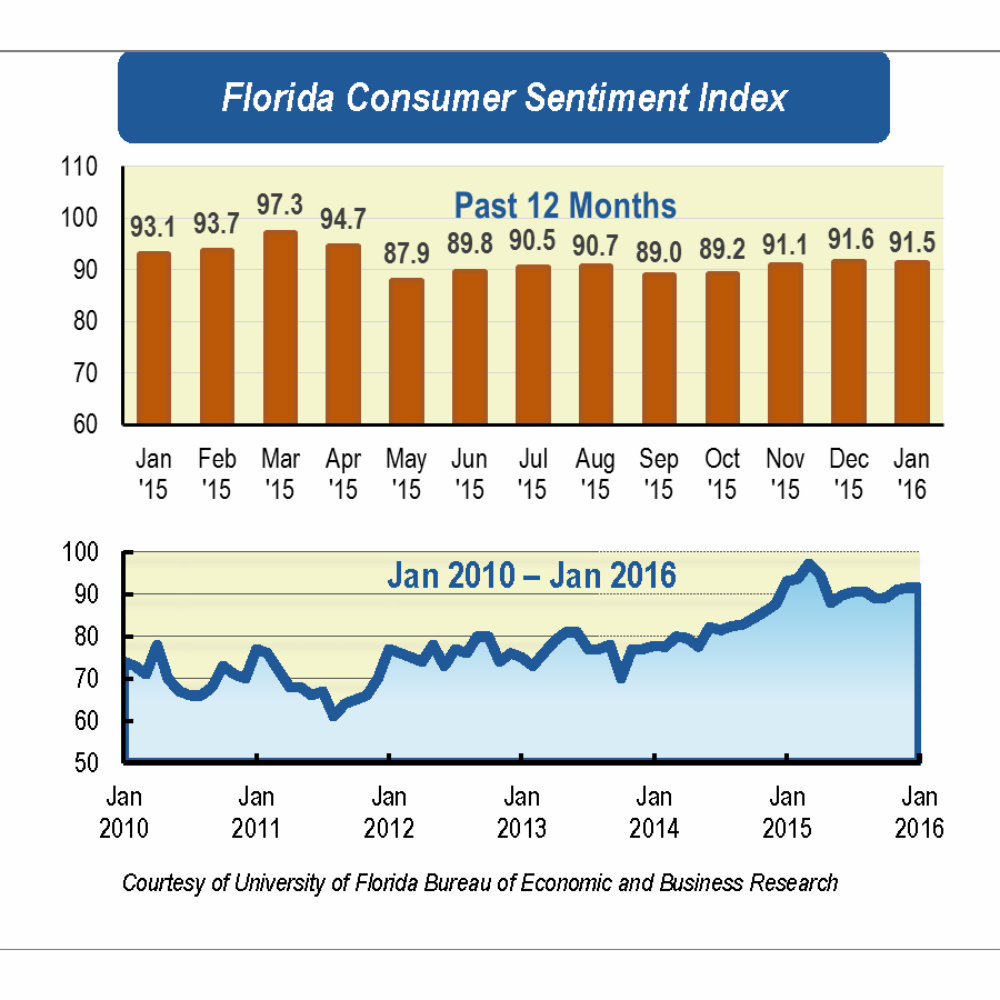 Consumer sentiment among Floridians fell slightly in January to 91.5 -- down one-tenth of a point from December’s revised reading of 91.6 and 1.6 points lower than January 2015, according to the latest University of Florida consumer survey.

Among the five components that make up the index, three declined and two increased.

Both short- and long-term views of the national economy were down. Expectations of U.S. economic conditions over the next year fell 1.8 points to 84.1, while the outlook on U.S. economic conditions over the next five years fell 4 points to 86.8. Compared with January 2015, both components are significantly lower: 11.6 points lower for expectations in the upcoming year, and 5.1 points lower for the next five years.

Opinions as to whether it is a good time to buy a big-ticket item fell 1 point to 100.9 but remained higher than the January 2015 figure.

“While only three out of five components fell, the biggest change between January 2015 and 2016 was the more than 11-point decrease in anticipation of U.S. economic conditions over the next year,” said Hector H. Sandoval, director of the Economic Analysis Program at UF’s Bureau of Economic and Business Research. “Although the biggest declines in expectations of U.S. economic conditions were observed in those aged 60 and over and those in households making more than $50,000, this unfavorable perspective is shared by all Floridians in general, independent of their gender, age or income level.”

Economic data in Florida continues to be mostly positive, particularly in the labor market. Unemployment among Floridians continues to fall, with December’s rate at 5.0 percent. There has also been a gain of 233,100 jobs since December 2014, which represents an increase of 2.9 percent. According to the Florida Department of Economic Opportunity, December was the 65th consecutive month with positive annual job growth.

Although inflation is expected to pick up as unemployment falls, the inflation rate decreased as the cost of energy products declined. This generates uncertainty on how the Federal Reserve will respond, given the increase in the interest rates announced last month to stay ahead of inflation. Nonetheless, the low price of gas represents a huge savings for Floridians, putting more money in their pockets.

“Despite the positive trends in the labor market, the decline in Floridians’ consumer sentiment, in particular the decline in the short- and long-run expectations on U.S. economic conditions, might be due to the drop in the stock market this year combined with the deterioration of the Chinese economy,” Sandoval said. “On one hand, if the turmoil in the stock market persists, this will reduce consumer spending in the medium-run; on the other, job losses might occur as a consequence of China’s slowdown,” Sandoval said.

Conducted Jan. 1-24, the UF study reflects the responses of 427 individuals who were reached on cellphones, representing a demographic cross section of Florida.

The index used by UF researchers is benchmarked to 1966, which means a value of 100 represents the same level of confidence for that year. The lowest index possible is a 2, the highest is 150.

Details of this month’s survey can be found at http://www.bebr.ufl.edu/csi-data