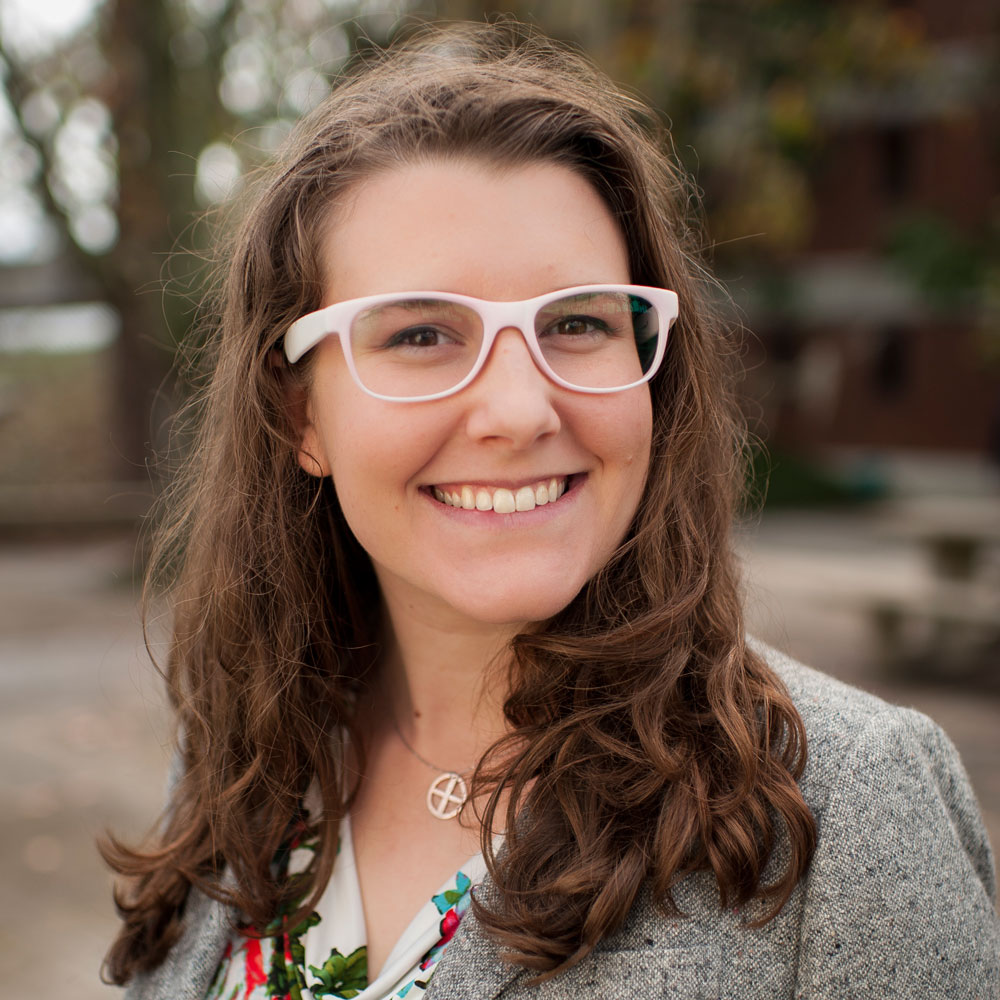 A few miles from Lake Okeechobee, the ancient village site known as Fort Center lies on the shore of Fisheating Creek as it snakes through the area and blends with the wet prairie landscape of South Florida.

It was here that a 1960s excavation by the late University of Florida archaeologist William Sears uncovered dozens of human remains, along with the remnants of a wooden structure and carvings of animals. Worn by time, but preserved deep in muck at the bottom of a man-made pond, these intricate carvings offer highly realistic representations of wildlife held so sacredly that natives gave them the same resting place as their dead.

It was these carvings – 150 of which are now housed at the Florida Museum of Natural History – that brought Margaret Spivey to UF this spring. A member of the Pee Dee Indian Nation of Beaver Creek and an assistant chief of the nation’s Upper Georgia Tribal Town, Spivey is working on a doctorate in archaeology at Washington University.

“I’m definitely an agenda-driven archaeologist,” Spivey said. “It’s not just about reporting what’s there for me, it’s about sharing the implications of my research. The reason I’m an archaeologist is because I believe we need more research that shows the complexity of Southeastern Native American groups.”

Named for a small fort that existed during the second and third Seminole wars, the archaeological site was likely used by more than one ethnic group over about 4,000 years. Over centuries, generations passed down the remarkable skill of capturing animal likenesses—bears, foxes, eagles, otters, a cat in full gallop—in wooden carvings.

The people who lived there were likely related to the Calusa, or the “shell Indians” of Florida’s southwest coast. But researchers are not certain exactly who they were and why they meticulously carved representations of wildlife, though archaeologists have recovered carvings dating back to about 300 AD.

Spivey’s dissertation aims to understand how Southeastern Native Americans interacted with animals—but also to decipher the more-deteriorated carvings and identify which animals were depicted. To do this, she uses a mixture of archaeology and ethnography, utilizing her intuition and personal experiences, rather than relying solely on hard, scientific facts.

“It’s like staring at clouds,” Spivey said, holding one of the wooden carvings in her hands. This piece, she thinks, is some kind of carnivorous mammal—maybe a fox.

“You have to use your imagination a lot. Many archaeologists aren’t comfortable with imagination coming into the data portion of your work. But really opening your eyes to see more than numbers and hard facts is something that iconographers all over the world do, and I’m trying to bring that into my process.”

But Spivey doesn’t get too fantastical in her analysis.

“I’m being less specific about my determination of what types of animals are being represented than the original archaeologists were and I’m trying to make it more verifiable,” she said.

The identities of these animal carvings could provide another key to unlocking the true complexity of early Native American cultures in the Southeast, a group that has been largely misunderstood and underestimated, especially hunter-gatherer groups prior to European arrival, Spivey said.

She is slowly building a list of animals represented by the carvings, which are housed at the Florida Museum and at the state of Florida’s conservation lab at Mission San Luis in Tallahassee.

“I’m using the species list as a lens to examine the way people interact with animals across the site,” Spivey said. “I’m comparing my findings to faunal remains from the site and the southeastern iconography.”

Spivey has spent many hours at the conservation lab, where everything from civil war artifacts to remnants of shipwrecks to chamber pots from the old capitol building are stored and studied. Here, artifacts from a 2013 excavation of Fort Center by Daniel Seinfeld, an archaeologist with the Florida Bureau of Archaeological Research, sat on a large table across from boots pulled from a Civil War shipwreck in the St. Johns River.

The recent excavation was conducted as a sort of rescue mission, after wild hogs in the area began wallowing in the pond and disrupting artifacts during a drought. Archaeologists found pieces of artifacts Sears left behind—pieces he thought were not as important. However, Seinfeld said the new findings will allow researchers to build a more complete picture of what took place nearly 2,000 years ago.

“It shows that sometimes the scraps leftover help you build a larger, better picture,” he said. “Plus, today our technology is more advanced than in the ’60s and we have a better understanding of archaeology in the Southeast. We’re able to update Sears’ interpretation.”

“We’re on the cusp of having a full, broad-strokes picture,” Spivey said.

Sears thought the carvings and other wood salvaged from the site was part of a structure that collapsed into the pond during a fire. Other archaeologists have hypothesized the carvings were associated with burial. Spivey and Seinfeld are re-evaluating these theories. Spivey suggests it is possible the carvings were put into the mortuary after they were no longer used. 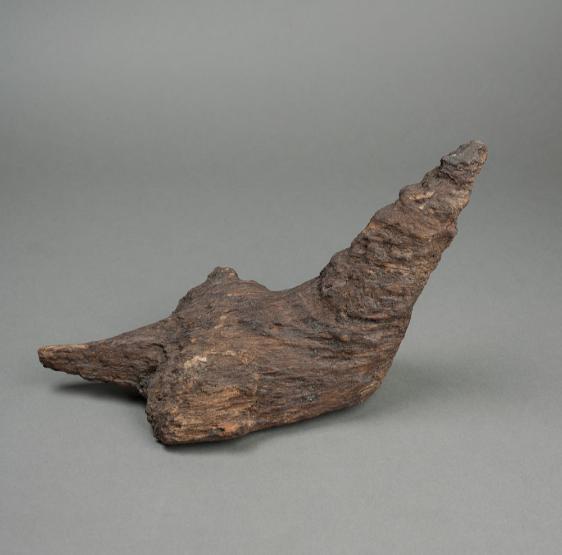 But, she said, we may never know for sure why people carved life-sized animals (such as the otter pictured above) or how they ended up in the pond.

“The hardest thing to get at is the why,” Spivey said. “You’re lucky if during your career as an archaeologist you get any solid whys. But we’re trying to find some answers by comparing this site to other similar sites in Florida and in the Southeast that have wooden carvings.”

The practice of carving animals from pieces of wood has continued into the present day, so Spivey said the reasons why Southeastern Native Americans carved might have changed over time.

“It is possible that the practice is not related to the burial,” she said. “The fact that they ended up in the same final resting place might be indicative of how important the carvings were in the daily life of these people. When they were no longer appropriate for use, they could be disposed of in a respectful way.”

Spivey pointed to knots in one of the pieces. She explained that native people utilized the natural grain of the wood to form unique likenesses of animals, which makes identifying them even more challenging. To chisel away at the wood, she said the carver probably used a combination of shells and wooden tools embedded with shark teeth. Some may have even been painted. Now, the badly deteriorated pieces look more like driftwood than carvings. For an untrained eye, it is difficult to imagine them in their original glory.

“Maggie’s got an eye for this,” Seinfeld said. “She’s seeing things that I didn’t see in the wood.”

Spivey hopes her research will expand the old world of the carvings’ original owners. Archaeologists have often viewed the early Native Americans of South Florida as culturally separate from the rest of the Southeast. But when Spivey compared the Fort Center site to ethnohistorical sources, she found that it might have been affected by social movements with connections to many other tribes in the Southeast.

“We’re doing out best to describe the cultural context,” she said. “The story for what people were doing, to better understand the culture.”

Raised on land in central Georgia owned by her tribe since shortly after the American Revolution, Spivey left her tightly knit family to attend Harvard in 2004.

“It gave me the opportunity to get out of poverty,” Spivey said. “Poverty is something that a lot of Native Americans face. But my parents taught me to take advantage of the very few opportunities you get when you’re very poor.”

She was interested in law, but soon switched to archaeology when she discovered that by improving the public’s understanding of Native Americans’ complex cultural past, she may be able to influence today’s social and political atmosphere and help other Native Americans facing challenges similar to her own.

Spivey said too little of the information archaeologists discover makes its way into public policy discourse, but she wants that to change.

But this personal connection to her work does not skew her results, she said.

Because she wants to correct public misconceptions, Spivey is attracted to places that defy all expectations. She previously worked at Poverty Point near the Mississippi River, which like Fort Center had characteristics contrary to stereotypes about hunter-gatherer groups.

“People assume hunter-gathers aren’t capable of sedentary life,” Spivey said. “We don’t know for sure if the people at Fort Center were sedentary, but we do know that it was occupied over a long period of time by humans, so it’s a good place to look for that kind of sedentism.”

It is likely there was at least permanence in native people’s understanding of the place. It was ingrained in the memory-scape of their culture, Spivey said.

"Right now I find myself trying to cobble things back together that were lost between my mother and her grandmother’s generation."

“It’s sort of like knowing a place from your grandmother telling you about it, then eventually seeing it yourself,” she said. “The knowledge was passed down. Landscape is very important to modern native people as far as where you derive your cultural and spiritual understanding.”

The tradition of passing down cultural and religious practices has existed for millennia among Native Americans. But during Jim Crow segregation in the ’60s, many Native American children were placed in black or white segregated schools, depending on how light or dark their skin color, and forced to assimilate. Spivey said Native Americans in the Southeast have been struggling to hold onto traditional practices ever since.

Due to factors like segregation and a longer period of European intervention and interaction in the eastern states, Spivey said there has been more assimilation of Native American culture with the larger hegemonic American cultures in the east than in the west.

“I hope my long-term research will help us enrich and reclaim some of our cultural practices that were unfortunately lost,” she said. “We just didn’t catch them in time.”